By Calla Wahlquist, The Guardian

Twenty-four of Australia’s rarest tortoises have been released outside their natural range because climate change has dried out their remaining habitat. 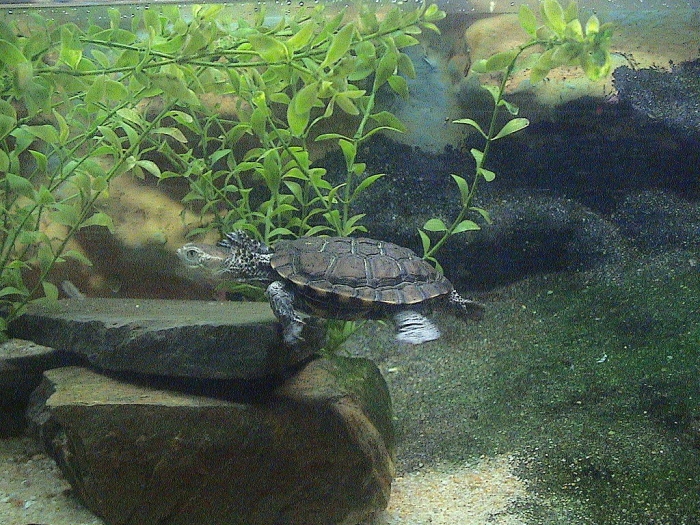 A Western swamp tortoise at the Adelaide Zoo in Australia/Wikipedia

The juvenile tortoises – between three and four years old – were released at Meerup, 360km south of Perth, and into an established colony at Moore river national park, 130km north of Perth.

It’s the first time climate change has driven the assisted colonisation of a vertebrate species, after attempts in the US and Britain to translocate plants and butterflies, respectively.

Western swamp tortoises were believed to be extinct until the species was rediscovered in the 1950s. There are about 230 living in the wild, most of which were bred in captivity at Perth zoo and released.

But Kuchling said it was very difficult to be accurate about swamp tortoise numbers because “they are very cryptic and hard to find.” Their natural range is constricted to a small area of the Swan valley which happens to overlap with the footprint of greater Perth.

The soil and water at Meerup in the D’Entrecasteaux national park on WA’s south-west coast may be a bit cold for the tortoises now, but by 2050 conditions will be ideal, according to climate modelling done by researchers at the University ofWestern Australia.

“The expectation is that in spring they will probably grow at a slower rate,” Kuchling told Guardian Australia. “What I hope is the trial will give us an indication if it makes sense to do more releases and translocations of the tortoises to the area now, or if, due to the current climate differences, the potential that the species will grow up well there is not there.”

Dr Nicola Mitchell, a senior lecturer in evolutionary biology at the University of Western Australia, was part of a team that conducted extensive modelling to find an area in WA that would, by 2050, mirror the conditions in the Swan valley in the 1960s.

The tortoises put on weight and grow in the wet season and undergo an eight-month aestivation (which is similar to hibernation but for warmer months) in the summer. In the 60s, Mitchell said, they could expect the water to last for seven months; now it regularly runs out in three.

“Climate change is really what this whole story is about,” she said. “It’s a world first, we think, for moving a reptile out of range because of climate change.”

Kuchling has been working with the elusive tortoises since he moved to Perth from Austria in 1987. He helped Perth zoo, which had been running a captive breeding program for six years with no success, have its first batch of eggs, and has since worked on efforts to save the species.

About 700 zoo-bred western swamp tortoises have been released in the 28 years since, many of which have not survived to maturity. That’s fairly normal among tortoises, Kuchling said, but there have been some setbacks.

In the early 90s researchers lost a lot of juvenile tortoises to raven attacks and, in 2002, a bushfire swept through the Mogumber nature reserve, killing most of the newly established colony.

The tortoises have been fitted with radio trackers and will be monitored by researchers from the University of Western Australia in a joint project with the Department of Parks and Wildlife.