Where there is drought in the West, major wildfires are sure to ignite. 2014, just like last year, promises to be another year of destructive wildland blazes in the states where drought has hit the hardest over the last several years: California, Arizona and New Mexico.

The rest of the country, however, can expect a nearly-normal or below normal fire season ahead. 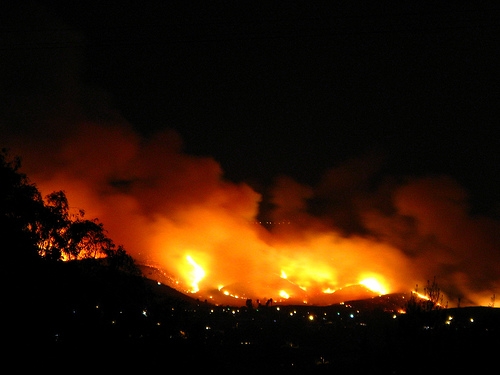 That’s the gist of the National Interagency Fire Center’s April 1 nationwide wildfire forecast update, which delivers plenty of good news for much of the U.S. as it shows how snowpack and weather trends are affecting the wildfire season through July.

Though the wildfire forecast has much to say about how combustible the Sierra Nevada mountains and the Southwest will be through the summer, it paints a picture of a possible reprieve from conditions that burned hundreds of thousands of acres across the Rocky Mountains in 2012 and 2013.

So let’s begin with the good news: Colorado, which lost more than 1,000 homes in the Waldo Canyon and High Park fires of 2012 and the Black Forest Fire of 2013, is likely to get a break this year from the conditions that fueled those fires. Wildfire conditions are expected to be normal throughout most of Colorado, Wyoming and Utah, with below normal fire conditions expected in western Montana and northern Idaho in June and July.

“As the spring progresses, we’re expecting greenup conditions to curb that fire potential,” said Tim Mathewson, a wildfire meteorologist for the U.S. Bureau of Land Management in Lakewood, Colo.

With snowpack 114 percent of normal in Colorado and the Rockies headed into their wettest months of the year, wildfire conditions in Colorado, Wyoming and the Black Hills are expected to be much less severe between now and July than in 2012 and 2013, he said.

More good news: Recent wet conditions will mean the likelihood of wildfires in most eastern states will be either normal or below normal.

From there, however, the good news in the latest wildfire forecast is a bit more subdued. The rest of April in Iowa, Nebraska, Missouri and Kansas, will likely bring a high wildfire potential that is expected to diminish in May. Michigan and eastern Wisconsin could see an elevated wildfire risk in June and July, according to the forecast.

Meteorologists expect an El Niño to develop in the Pacific Ocean during the summer, possibly bringing cooler, wetter weather to much of the West, but it adds a measure of uncertainty into the wildfire forecast for the Southwest.

Here’s a breakdown of where you’re likely to see the worst wildfires burn and why:

A normal wildfire threat is expected to quickly become significant in May, with the desert Southwest expected to be a tinderbox by June. Delayed by recent rain and snow, the fire season is expected to amp up quickly as the region dries out later in the spring.

But there’s a lot of uncertainty about how dry and warm the summer will become and how severe the resulting wildfire season will be in Arizona and New Mexico because of the uncertainty about if and when an El Niño may form. The wildfire forecast says that if an El Niño develops in April or May, the Southwest could see a cool, wet summer, moderating the fire season. 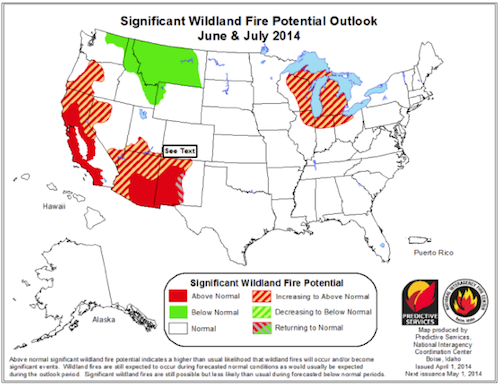 Up to 8 inches of rain fell in parts of Southern California in late February, with more rain in March, including up to an inch in some places over the last several days. But the rain just hasn’t been enough to sully the upcoming wildfire season, said U.S. Forest Service meteorologist Tom Rolinski, who works for the National Interagency Coordination Center Predictive Services in Riverside, Calif.

With nearly three years of drought, much of it still considered exceptional throughout California, everyone was expecting 2014 to be a wild wildfire season across the state. With all the rain since February, the only thing about that wildfire forecast that has changed is the timing of the start of the wildfire season, Rolinski said.

“We’re trying to refine a little bit of where we think the major focus of our fire activity is going to be this summer, and a little bit around the monsoon and what kind of lightning activity we’re going to have across the mountain and desert areas this summer.”

Northern California won’t see catastrophic wildfire conditions for the next few weeks, either, but with many areas of the Sierra Nevada mountain range still seeing a fraction of the normal snowpack, above-normal wildfire conditions are expected there come summertime, too.

Just as in neighboring California, recent storms have done little to douse the drought in Nevada. With snowpack well below normal in most of the Great Basin, the wildfire threat is likely to increase by early summer as dry, warm weather sets in.

She said much of Nevada and the western Sierra Nevada mountains are unlikely to see their wildfire season start earlier than the normal late June, early July timeframe, but dry conditions are likely to bring low-elevation wildfires early in the season, then the major forest fires in the mountains later on.