Over the better part of a week, a slow-moving low-pressure system dumped rain across parts of Oklahoma and Texas, including parts of the region suffering the most from drought. The storm brought them at least a modicum of relief according the latest U.S. Drought Monitor.

“Basically, the rain fell exactly where it was most needed,” Victor Murphy, the climate services program manager with the National Weather Service’s Southern Region, said in an email.

A comparison of drought conditions in Texas and Oklahoma for the weeks of May 20 and May 27.
Credit: U.S. Drought Monitor

But it will take much more than a few days of rain to make serious strides toward ending a drought that has been years in the making. Unusually dry and hot conditions settled into place in October 2010, then persisted through wet season after wet season, due to factors like La Nina and other climate patterns that influence the region’s weather. What percentage of any single drought or other event climate change is responsible for is difficult to tease apart, but the steady rise in average temperatures as greenhouse gases accumulate in the atmosphere exacerbate the impacts of droughts. And places that are already dry are only expected to get drier.

A number of drought-stricken areas saw heavy rainfall with the highest seven-day totals stretching from central Texas through the Texas Panhandle and southwest Oklahoma. Southeast and northeast Oklahoma also got a good soaking, though those areas have been less affected by the drought. 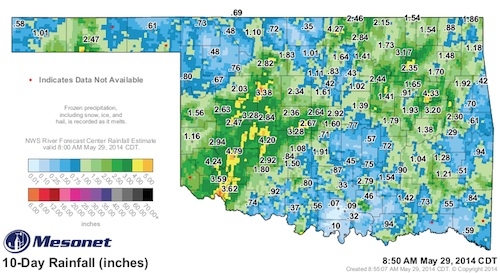 Rainfall amounts (in inches) across Oklahoma over the 10 days from May 19 to May 29, 2014.
Credit: Oklahoma Mesonet

Not every community that needed rain got it during this rainfall event, though. Murphy said Wichita Falls, Texas, was the one major city that missed out on rain.

The city, located in the north-central part of the state, recorded just 0.31 inches of rain over the past 7 days. Other areas of the Southern Plains saw closer to 5 inches over that time.

The city has received only 47 percent of its normal rain for the year — the same percentage it was at before the rains swept through, Murphy said — and has declared a Stage 5 Drought Catastrophe. The declaration means absolutely no outside watering is allowed and other serious restrictions have been placed on the use of city-supplied water.

And while drought improved somewhat elsewhere, it’s not a total recovery.

“(It) still means those counties are in a really bad drought. Just not record bad at this point,” said Michael Brewer, the author of this week’s Drought Monitor and a scientist with the National Climatic Data Center.

The rain will help to put a bit more water into reservoirs, increase the flow of water in some streams, and the moisture in the soils.

“The biggest improvement will be in soil moisture and some greening up of the vegetation across the area,” Gary McManus, Oklahoma’s state climatologist, told Climate Central. “That will help prevent or reduce the extreme fire danger that we've seen continue into spring from our normal fire season which usually ends in early spring or late winter.” 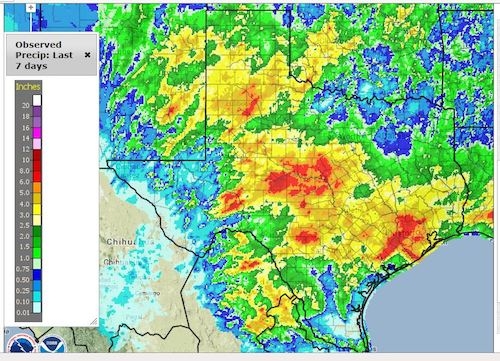 Rainfall totals across Texas over the seven days ending on May 29, 2014.
Credit: Vincent Murphy/NOAA

But just how long these benefits will last depends on whether or not the area sees any more rain in the next few weeks and months and how hot the summer season gets, as heat dries out the soils and increases the demand for water.

“If the rain stops, the drought will worsen,” Brewer said.

Without more rain, Brewer said the recent improvements could disappear in a matter of weeks.

The forecast tools from the National Oceanic and Atmospheric Administration make it clear that even normal precipitation over the next few months are unlikely to end the drought, Brewer said, because areas are running at such a large deficit. Some places, including Wichita Falls, are as much as 40 inches of rain in the hole.