After the devastation of Hurricane Katrina, New Orleanians thought they knew what areas were susceptible to flooding during a storm. So when Hurricane Isaac, a much weaker storm than Katrina, bore down on the city in 2012, those who live to the west of Lake Pontchartrain weren’t worried, as they had been spared the raging waters that inundated so much of the city during Katrina. 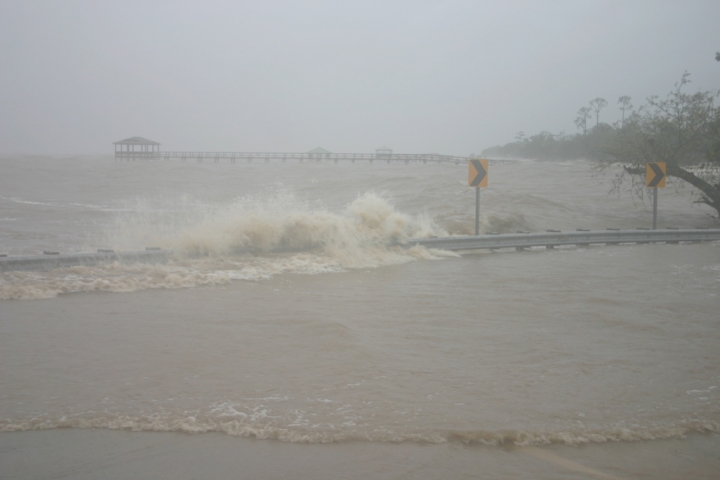 As Hurricane Isaac dumped rain on the greater New Orleans area, the storm created a surge on Lake Pontchartrain that officials say was greater than Hurricane Katrina in 2005. This was the scene on the north shore of the causeway.
Click image to enlarge. Credit: Lt. Conrad H. Franz/Lake Pontchartrain Causeway Police

But Isaac turned out to be the perfect storm for that area. The surge that Isaac pushed ahead of it raised lake levels by 6 to 9 feet, and they stayed elevated for an unusually long time. At the same time, the area around the lake saw 11 or more inches of rain from the storm. Because the lake levels were so high, there was nowhere for the rainwater to drain, and so water flooded the streets and houses to the west of the lake.

“Many people were caught off guard,” Hal Needham, a storm surge scientist at Louisiana State University said, and thousands had to be rescued from the rising waters. It turns out that many more coastal residents are at threat from the meteorological double whammy of freshwater flooding and storm surge, which a new study finds is a serious threat for large stretches of U.S. coast.

That one-two punch – called compound flooding—isn’t something that many places in the U.S. plan for, however, as studies of risk tend to look at one danger or the other, Needham said. And global warming-driven sea level rise exacerbates the problem even further.

Thomas Wahl, a postdoctoral researcher at the University of South Florida, noticed that no one had really looked at how often compound flooding events happen along the U.S. coast, where more than half of the country's population lives in densely populated areas and where development has been steadily rising in recent decades.

He and his colleagues combed through historical data to see if there was a relationship between heavy precipitation events and storm surge for locations all along the coasts. They found substantial portions of the Gulf and Atlantic coasts where the two factors were linked, and also found that compound flooding events were happening more often now than in the past at many locations.

The main idea of the study, detailed July 27 in Nature Climate Change, was to “raise awareness that those kinds of events exist” and are dangerous, Wahl said. So far, “we have pretty much ignored them.”

The wall of ocean water that the winds of a storm system, such as a hurricane, can push in front of it can combine with heavy rains to exacerbate flooding in two ways: Either the rainfall inland can ramp up the severity of the surge-driven flooding, or the surge can elevate water levels to the point that gravity-driven flow of rainwater is impeded, causing that water to collect in streets and seep into homes.

To get an idea of the risk of compound flooding in the U.S., Wahl and his colleagues looked at long-term data of precipitation, tide gauge levels and hurricane tracks to see when heavy precipitation and storm surge happened at the same time at various locations. They found a significant relationship along the Gulf and Atlantic coasts, which, Wahl said, made sense given the susceptibility of those coastlines to the tropical systems that tend to bring both threats. 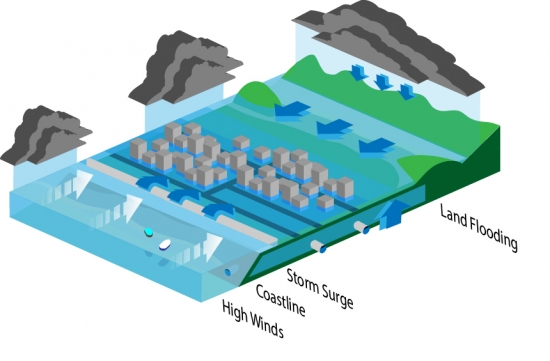 This schematic shows how the coincident occurrence of precipitation and storm surge (large enough to cause direct flooding or to slow down or fully block freshwater drainage) can lead to compound flooding in coastal regions.
Click image to enlarge. Credit: Theodore Scontras/University of Maine

The researchers also looked to see how linkage between rains and storm surge had varied over time and found that compound flooding events had increased since the first half of the 20th century for several locations, from Boston to Tampa to San Diego.

Wahl said that they aren’t yet sure why such events have been on the rise and the reasons could vary from climate change to natural climate cycles like El Niño. Also unclear is whether such a trend could be expected to continue. “It might be stable now, it might continue to increase, it might go down,” Wahl said.

Those possibilities are something he hopes to delve into with future research.

In future work, Wahl also wants to drill down to see what exactly is happening in the atmosphere when compound events occur. He and his colleagues took a preliminary look at New York City and found that storm surge tends to happen in tandem with heavy precipitation when a low pressure system affecting the city is accompanied by a high pressure system over the North Atlantic that helps funnel in moist air to fuel rains.

Overall, Wahl said that this study was “just a starting point” and that he hopes it will raise awareness of the combined rain-surge threat in coastal communities and prompt city planners and engineers to begin factoring such events into their plans.

The specter of sea level rise makes such threats even more problematic, as they can both raise the level of storm surge and curb the gravity-driven drainage of rainwaters, Needham, who wasn’t involved with the study, said.

“That’s the reality of what we have to plan for,” he said.

You May Also Like:
GAO Report Sees Climate Risks to Army Corps Projects
How This El Niño Is And Isn’t Like 1997
Stagnant Summer Days on the Rise in U.S.
New Grants Fund Research for Underseas Carbon Storage