Vast volumes of water falling as rain and snow have stayed on land in recent years, slowing the rise of the seas, new research has revealed.

Water is constantly evaporating from oceans and moving to land, where it’s stored fleetingly in lakes, snowpacks, soil and tree canopies, before flowing back again. 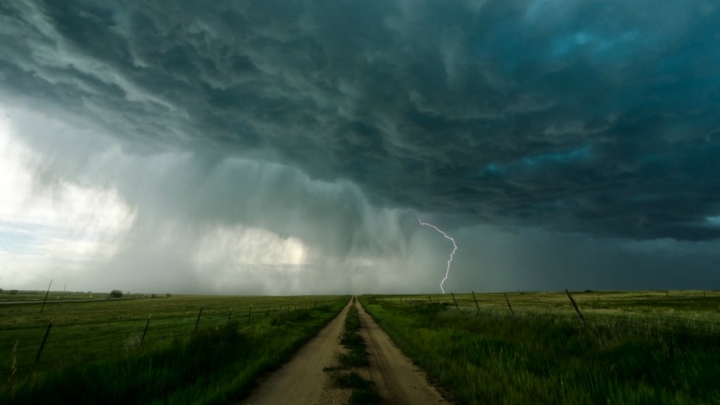 Storms can transfer water from the oceans to the land.
Credit: Shannon Dizmang/Flickr

The land “has been taking up water,” said NASA Jet Propulsion Laboratory scientist John Reager, who led the study published Thursday in Science. “That’s been slowing the rate of sea level rise.”

The effect may have been temporary, and it has not been enough to protect coastal residents from profound shoreline changes triggered by global warming.

The new study relied on NASA gravity data from 2002 to 2014 to track the changes in the amount of water stored on land. The finding excluded water stored in glaciers, which continued to decline as warming temperatures caused them to melt.

Because of global warming, high tides are lapping an average of 8 inches higher than they were in the 1800s, causing routine flooding along the East and Gulf coasts. Several feet or more of additional sea level rise is anticipated this century, threatening roads, pipelines, buildings and residents around the world.

Seas have been rising about 3.2 millimeters (one-eighth of an inch) yearly since the early 1990s. The rate is projected to pick up pace as more water melts from glaciers and ice sheets, and as warming oceans continue to expand.

Because of the high amounts of water being trapped on land, the rate fell to 2.4 millimeters from 2002 to 2014, slowing sea level rise by a quarter, according to the findings from the study.

During the 12-year period studied, Reager said enough water to fill Lake Huron — which between Michigan and Ontario is one of the world’s biggest lakes — was drawn out of the oceans and stored on land.

One of the lesser-known causes of sea level rise is the pumping of groundwater out of aquifers for irrigation and other uses, which eventually ends up in the oceans. The researchers discovered that twice as much water was trapped on land from 2002 to 2014 than was pumped out of aquifers.

Some of the additional water stored on land would have been trapped in new reservoirs, such as China’s Three Gorges Dam. But the analysis showed the effect of new and expanded reservoirs was minor.

Instead, the changes appear to have been caused by the whims of long-term weather patterns. 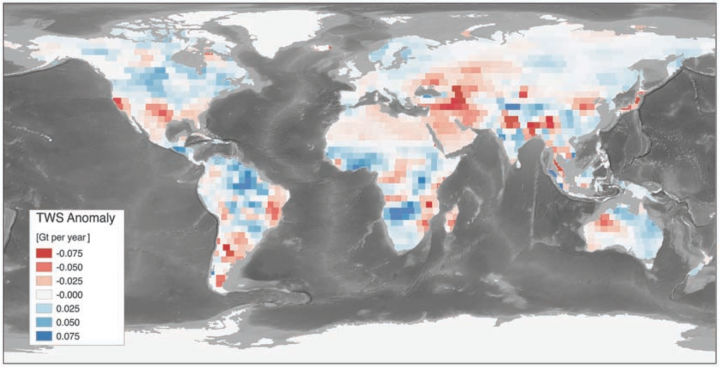 
“What you see here is a multi-year trend in terrestrial water storage that’s not related to groundwater depletion or any reservoir storage,” said Marc Bierkens, a hydrology professor at Utrecht University, who was not involved with the study. “It’s related to climate.”

Bierkens and other scientists lauded the study, saying it filled in important data gaps, improving understanding of how natural cycling of water around the planet is affecting sea levels.

“It’s the first time that total terrestrial water storage has been monitored,” Bierkens said. “Not modeled, but monitored — over more than a decade.”

Scientists aren’t sure whether the pattern they discovered is part of a longer-term trend linked to climate change and increasing storminess, or part of a shorter-term cycle linked to natural variations in the weather.

But many suspect it’s part of a cycle, which may mean seas will rise even more quickly than anticipated in the years ahead.

“We think it could even reverse and go in the other direction,” Reager said. “It could be an accelerator for sea level rise.”

You May Also Like:
These 9 EU Countries Are Leading the Renewable Charge
Low Oil Prices Force Slowdown of U.S. Tar Sands Project
Obama Confident in Climate Plan Despite Court Setback