The explosion and fires that followed a runaway oil train slamming into the town of Lac-Mégantic, Quebec were so powerful that they were visible from space. At least 13 people died and about three dozen are still reported missing after the accident on July 6. The train was carrying crude oil from the Bakken oil field in North Dakota to a refinery in New Brunswick, which is on the northeast coast of Canada. The incident has ignited a renewed debate about the safety of transporting oil by train instead of pipeline, which is becoming increasingly common in Canada and parts of the U.S. as both countries tap into newly accessible deposits in North Dakota, Alberta, and other areas. 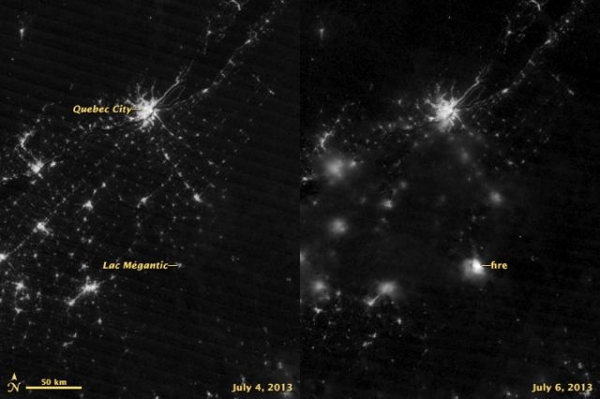 The picture on the left was taken on July 4, 2013, before the oil explosion, while the image on the right is from July 6, when the accident occurred.
Click image to enlarge. Credit: NASA

The explosion and fire that followed it devastated the small town, wiping out 30 homes and forcing several thousand to evacuate. The blast and ensuing fires were seen from space via an instrument aboard NASA's Suomi NPP satellite, which was launched in 2012.

Here is how NASA described the images:

“The image on the right was acquired at 6:59 GMT (2:59 a.m. local time) on July 6 by the instrument’s 'day-night band,' which detects light in a range of wavelengths from green to near-infrared and uses filtering techniques to observe signals such as city lights, auroras, fires, and reflected moonlight. The image on the left, shown for comparison, was acquired by the same instrument on July 4, before the derailment. Light sources are not as crisp in the July 6 image because of cloud cover.”

The instrument, known as VIIRS, is a spectroradiometer that detects light in 22 different wavelength bands, in a manner similar to digital cameras, NASA said on its website.

According to the Associated Press, 73 rail cars (72 of which were transporting crude oil) derailed at 63 mph after traveling for 7 miles. They detached from a parked train for unknown reasons. The Montreal, Maine & Atlantic Railway train had experienced a fire earlier, in a different town, and that fire was put out and the locomotive shut down. Investigators are reportedly looking into the possibility that shutting down the engine could have released the brakes, contributing to the derailment.

The same satellite instrument has also spotted oil and gas drilling activity at the Bakken oil field, the source of the crude oil involved in the accident.

The oil train explosion may affect the ongoing debate over the fate of the Keystone XL pipeline that would transport oil from Alberta to Gulf Coast refineries, since a lack of pipeline capacity may increase the use of trains as a way to transport oil.

Editor's Note: This story has been updated to correct an earlier error. The oil was bound for a refinery in New Brunswick, not Newfoundland, as originally reported.