Pruitt Dances on Climate, Calls for Change at EPA

“Restoring” trust in government. Adhering to the “rule of law.” Giving local officials more influence over federal regulation. Climate change is “not a hoax,” but climate science is “subject to debate.”

These were the themes on display Wednesday during the fiery Senate confirmation hearing for Environmental Protection Agency administrator nominee Scott Pruitt. Senators questioned him intensely on his doubts about climate change and his long history of filing lawsuits against the very agency he has been nominated by President-elect Trump to lead. 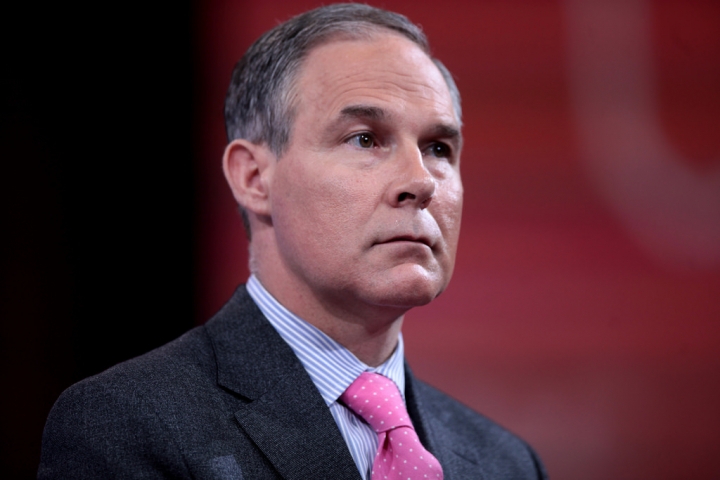 Given Pruitt’s combative history toward the agency — and Trump’s promises to promote nearly unfettered fossil fuel development while wiping away regulations controlling carbon emissions — a Pruitt-led EPA could undo or weaken the Obama administration’s climate regulations that gave weight to the U.S. commitment to curb greenhouse gas pollution under the Paris Climate Agreement. And that could undermine global progress on climate change and help obscure the threat Americans face from global warming.

In an early exchange that set the tone for Democrats’ sharp criticism of his record, U.S. Sen. Sheldon Whitehouse, D-R.I., chastised Pruitt for not recognizing how rising seas caused by climate change are harming Rhode Island’s seafood industry, which is harming fisheries off the state’s coast.

“I see nothing in your career that you will give those fishermen any confidence that you care for their wellbeing one bit,” Whitehouse said.

Like Interior Secretary nominee Ryan Zinke before him on Tuesday, Pruitt said anger among those unhappy with the federal government demands sweeping change in how it enforces regulations.

Those talking points are becoming common among Trump administration nominees who insist that Obama-era regulations have stifled economic progress, hurt jobs and need to be drastically changed, even as the economy has continued to grow and unemployment has returned to the low levels of 2008 prior to the Great Recession and Obama’s presidency.

“People in this country are really hungry for change,” and it’s important for the EPA to assess how “we reprioritize as a nation,” Pruitt said.

The EPA is the primary environmental regulator in the U.S. and is required by law to keep America’s air and water clean and free of toxic chemicals and other pollutants. The Supreme Court ruled that the federal Clean Air Act requires the EPA to regulate carbon emissions. In 2009, EPA scientists found that carbon pollution harms human health because it causes global warming.

If confirmed, Pruitt said he would reject the idea that regulators should pick “winners and losers,” a phrase often used by opponents of climate regulations when referring to laws and climate policies that bolster low-carbon forms of renewable energy such as wind and solar instead of fossil fuels.

Regulations, he said, “shouldn’t favor any sector of the economy.”

Pruitt, while agreeing that climate change is not the hoax President-elect Donald Trump says it is, said “civil discourse is absent in climate change.” Pruitt falsely claimed that scientists’ ability to measure the extent of humans’ impact on climate change is “subject to debate and dialogue.”

In fact, established climate science has shown that carbon emissions from burning coal, oil and natural gas for transportation and electricity have overheated the atmosphere and are the primary cause of climate change.

Pruitt suggested that Obama administration regulations that aim to protect the environment and stop climate change have exceeded the government’s legal authority to do so. Those regulations have led people opposing them to distrust the federal government and feel as though they have little control over how they are being regulated, he said.

As Oklahoma’s attorney general, Pruitt has sued the EPA 14 times. He is currently suing the EPA — a case filed by 24 states — to stop an Obama administration regulation requiring existing coal-fired power plants to cut the carbon pollution driving climate change.

That regulation, the Clean Power Plan, is the Obama administration’s most sweeping climate policy. It showed the rest of the world that the U.S. is serious about drastically cutting its greenhouse gas emissions in order to prevent global warming from reaching dangerous levels as required under the Paris Climate Agreement.

During the hearing, Pruitt said that the Supreme Court required the EPA to regulate carbon dioxide as a pollutant under the Clean Air Act because of carbon’s role in global warming.

But, the Obama administration went too far in doing so, he said.

In their lawsuit against the EPA, Pruitt and 23 other states claimed that the Obama administration violated the Constitution by going too far in mandating that states change how they generate electricity in order to cut carbon pollution. That claim has been vigorously disputed by environmental groups and states eager to uphold the Clean Power Plan.

“The climate is changing,” Pruitt said. “The job of (EPA) administrator is to carry out statutes as passed by this body. In response to the CO2 issue, the EPA administrator is constrained by statutes.”

Several court cases against the EPA that Pruitt is involved in as Oklahoma attorney general are ongoing. When asked if he as EPA administrator would recuse himself from those cases, Pruitt refused to say if he would do so voluntarily.

“I have every willingness and desire to recuse as directed by the EPA Ethics Council,” Pruitt said. “If directed to do so, I will do so in those cases.”

Throughout the hearing, Pruitt refused to say whether he believes the EPA should go out of its way to cut carbon pollution to address climate change. While insisting that the EPA should follow the letter of the law when regulating carbon emissions, he suggested the future of the agency’s requirement to cut climate pollution may be uncertain even though the Supreme Court has ruled that carbon dioxide must be regulated under the Clean Air Act.

If the GOP-controlled Congress chooses to change the law to remove carbon dioxide as a pollutant, it has the power to do so.

“The EPA — there’s currently an obligation to deal with the issue,” Pruitt said. “There is a legal obligation presently for the administration to respond through proper regulations.”

You May Also Like:
The Temperature Spiral, Now With 2016’s Record Heat
Google Earth Shows 30 Years of Climate Change
The U.S. Has Been Overwhelmingly Hot This Year