Donald Trump’s election portends a major shift in how one of America’s greatest bulwarks against the impacts of climate change will be protected and used for fossil fuel development.

Scientists and conservationists are just beginning to grasp what may lay ahead for more than 600 million acres of national forests, monuments, parks, conservation areas and other federal public lands. But, they say Trump’s statements promoting fossil fuels development on public lands make it clear that the days of managing these lands with renewable energy, conservation and climate change in mind may soon be over. 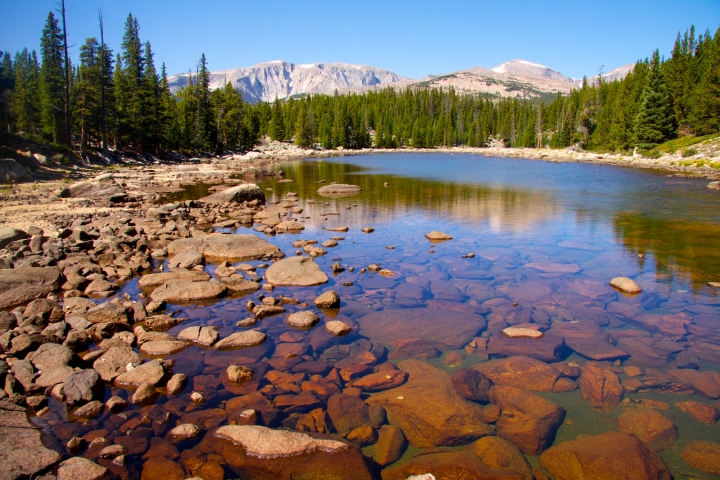 Federal lands make up roughly 27 percent of the land area of the U.S. — equivalent to the landmass of California, Texas and Alaska combined. The forests they preserve store carbon dioxide from the atmosphere, and federal lands act as a living laboratory for scientists to study the impacts of climate change on ecosystems. Public lands protect biological diversity and vast ecosystems that act as a major defense against the effects of climate change.

Though Trump has detailed few specifics about how he’d like to see public lands management change in the coming years, two policy proposals provide clues:

First, his energy plan calls for vigorously promoting fossil fuels development. Canceling restrictions on energy production — including oil, natural gas and coal on federal land — is among the first directives Trump says he will make in his initial days in office.

Enacting those changes won’t be easy because they’ll face both the headwinds of the energy market, which has favored natural gas production over coal in recent years, and the federal government’s bureaucracy, which can easily bog down sweeping policy shifts in red tape.

But once Trump is inaugurated, the GOP will control both Congress and the White House for the first time since the Republican Party announced support for the government to shrink its land holdings.

The federal role in managing public land was front-and-center earlier this year during the armed takeover of an Oregon national wildlife refuge by a group calling for states to take control of federal land. The land transfer movement is led by local government officials across the West who are sympathetic to anti-government groups' demands for public lands to be given to the states. Trump met with one of the movement's leaders in October, suggesting that federal ownership of public land is inefficient.

Over the past eight years, the Obama administration has done little to slow oil and gas development on public lands. As part of its climate strategy, however, the administration has created renewable energy development zones in Southwestern states and placed a moratorium on future coal leasing while it assesses the impact federal coal development has on climate change. Just this week, it announced a plan to halt oil and gas leasing in waters off the coast of Alaska. 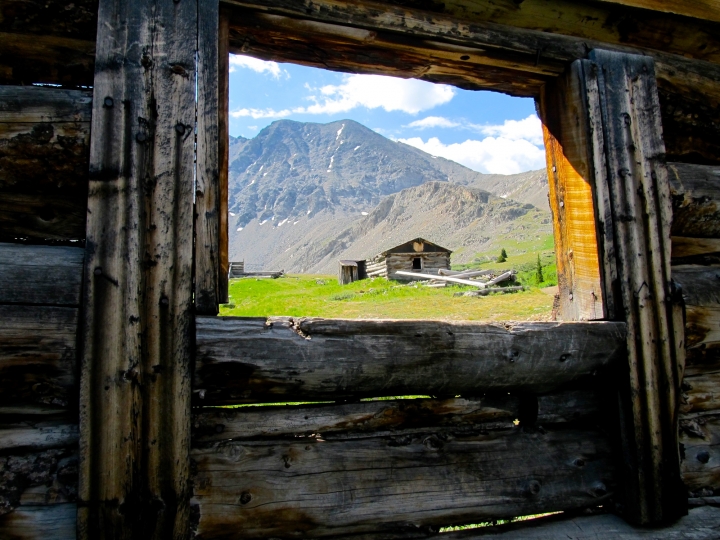 Land use plans adopted by local districts of federal agencies have also restricted some fossil fuels leasing and development in some areas, including around national parks in eastern Utah and elsewhere.

Ray Rasker, executive director of Headwaters Economics, an independent research group focusing on the economic implications of land management decisions in the West, said Trump’s vision for unfettered fossil fuels development on public lands will run up against market forces.

“It is a myth fossil fuel development is subject to roadblocks,” Rasker said. “Energy development is driven by price, technology (e.g. fracking) and geology.”

Trump could lift Obama’s moratorium on future coal leasing, but that won’t bring the coal industry back from its decades-long decline or herald the opening of new coal mines across the West.

“The reason coal prices have dropped is due to reduced international demand and the rise of cheaper natural gas in the production of electricity,” Rasker said. “It has nothing to do with regulatory restrictions.”

Rolling back any land use plans that restrict fossil fuels development would take a long time as Trump administration proposals work through the bureaucratic process, said Mark Squillace, a natural resources law professor at the University of Colorado-Boulder. 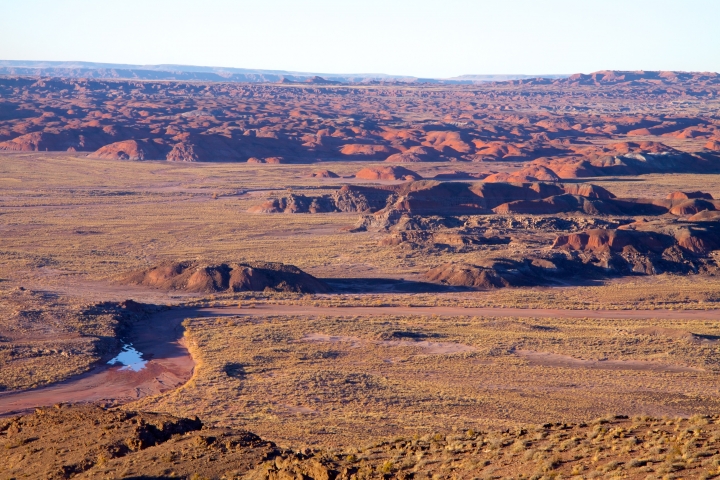 Petrified Forest National Park in Arizona has been expanded in recent years, and is one of the few national parks in the West surrounded mostly by private, state and tribal lands.
Credit: Bobby Magill/Climate Central

Trump’s desire to expedite oil, gas and coal development on federal lands conflicts with the GOP’s goal to get the federal government out of the land management business, he said.

“At a time when Trump has talked about increasing public lands energy development, in part, at least to increase federal revenues, transferring the lands and minerals would mean that he would have to forego those revenues at least down the road,” Squillace said.

Robert H. Nelson, a professor of public policy at the University of Maryland specializing in public lands management, who supports the transfer of federal public lands to the states, said state control of land currently owned by the federal government would promote more innovative land management practices. That would be especially true in drought-stricken areas of California and other parts of the West, where forest management has increased the risk of catastrophic wildfire.

“What it would do is open things up for a tremendous amount of change and experimentation,” Nelson said.

But research shows that such a patchwork of land management strategies across states can serve to undermine the intact ecosystems necessary to withstand climatic changes.

“You need large connected wild landscapes to protect the air, water, and wildlife that is affected by climate change,” said Alan Rowsome, government relations director at the Wilderness Society. “If you don’t have those large protected landscapes, you’re going to start to see species and ecosystems that aren’t able to adapt.”

Managing public lands so they encompass broad landscapes is a philosophy several federal  agencies underscored when they signed a memorandum of understanding with Canada in 2009. The memo says that vast swathes of public wild lands across political boundaries are critical to human and wildlife adaptation to climate change. 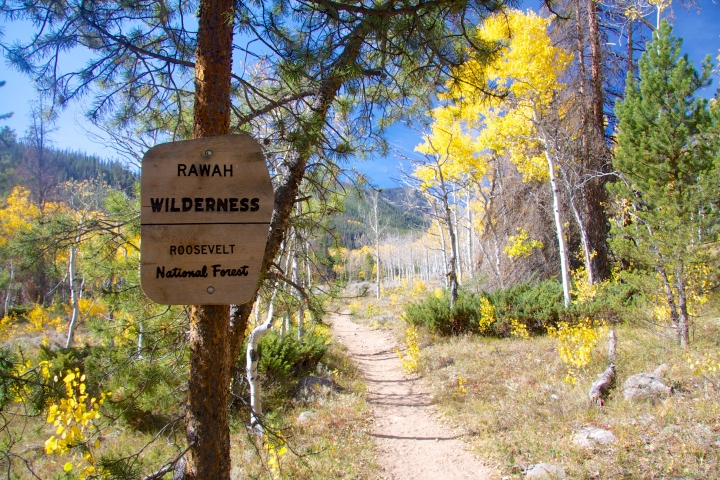 Scientists from the U.S. Forest Service, Bureau of Land Management, National Park Service and other agencies echoed that view in a study they published in September in the journal BioScience. The study shows that America’s patchwork of public lands needs to be more cohesive and broad to allow ecosystems to withstand the ravages of climate change.

The scientists are calling for a national habitat conservation system that would use a broad strategy across vast regions of public and private lands to help America’s wildlife survive climate change.

Transferring lands to states would make such a strategy more difficult, and environmental groups are gearing up to fight any changes to public lands policy that would that would allow them to be privatized or drop protections for the ecosystems they protect.

The platform of the GOP is for the first time aligned with efforts to seize public lands that have been led by industry front groups and fringe militia groups, said Mark Allison, executive director of the New Mexico Wilderness Alliance, an Albuquerque-based conservation group.

“We are absolutely preparing for the worst and fully expect efforts to fundamentally dismantle the last 100 years of commitment to our nation’s public lands,” Allison said.

Dominick DellaSala, chief scientist at the Oregon-based climate change think tank Geos Institute, said opposition to the deregulation or disposal of public lands will be fierce from both environmental groups and the public.

“The majority of Americans love their public lands and will not stand for giving them to the states or private sector as that would be catastrophic ecologically and economically,” DellaSala said.