Pollution Could Buy An Extra Decade of Arctic Sea Ice

Arctic sea ice continues to dwindle at an exceptional pace. Summer sea ice has declined at a rate of 13 percent per decade, and the rate has sped up in the last 10 years.

The main driver for Arctic sea ice’s disappearing act is the rising ocean and air temperatures driven by human greenhouse gas emissions. But that isn’t the only factor affecting Arctic sea ice. Air pollution also plays a role and can actually slow down warming.

In the tug of war, aerosols don’t necessarily counter the impacts of climate change on sea ice (or the planet as a whole for that matter). But new research shows that air pollution could buy the planet a decade of ice in the Arctic.

“It shows it’s a complex picture,” Nathan Gillett, a research scientist at Environment Canada, said. “Aerosols have quite a substantial impact on Arctic climate.”

Gillett co-authored the new research in pre-publication with Geophysical Research Letters. The findings show that aerosols have blunted 60 percent of the warming in the Arctic through the 20th century, a notable statistic given that the Arctic has still warmed at twice the rate as the rest of the planet.

This summer saw the fourth-lowest extent on record (and this winter also saw the lowest winter maximum on record). With temperatures projected to keep rising, it’s only a matter of time before the Arctic experiences an ice-free summer.

Going forward, aerosols — small particles that make up air pollution and reflect sunlight back into space — could continue to keep the northern reaches of the planet somewhat cool. Using a middle of the road carbon emissions scenario (which is a little optimistic given currently pledges) as well as rising aerosols, Gillett and his team show that the Arctic is likely to see an ice-free summer around 2057.

When his team ran the same scenario but capped air pollution at 2000 levels, ice-free summers in the Arctic started more than a decade earlier in 2045. 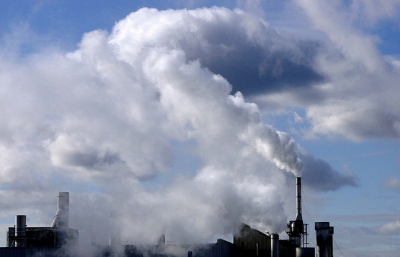 “The base driver of sea ice melt ultimately is anthropogenic greenhouse gases,” Walt Meier, an Arctic expert at NASA, said. “That ultimately causes enough warming to lose sea ice in summer in the Arctic. Aerosols are a secondary effect so they can reinforce carbon dioxide-influenced warming or slow it down.”

Sea ice extent in the region is crucial for a number of reasons. It provides habitat for polar bears and other animals that call the Arctic home. It also protects coasts from erosion, particularly in winter, and some research shows it could even affect weather in areas further south.

However, using air pollution as a means to buy time for Arctic sea ice is a devil’s bargain and could come with significant downsides.

In the U.S. alone, the Environmental Protection Agency estimates that clean air legislation will prevent more than 230,000 early deaths and provide $2 trillion in economic benefits by 2020.

Other research has considered the even more fiendish bargain of intentionally pumping enough aerosols into the stratosphere to keep the whole planet cool. The process, referred to as geoengineering or the even more ominous-sounding solar radiation management, has been rejected by most mainstream scientists and policymakers as too risky to pursue at this point, though.

Ultimately, the best solution is probably the most obvious: cut carbon emissions sooner than later.

You May Also Like:
Back to the Future Day, in Climate Trends
Sweltering September Sets Global Records
Study Sees Ecological Risks as Solar Expands
A New Blue Marble Every Day, Courtesy of NASA