Polar Vortex in U.S. May be Example of Global Warming

While the ongoing cold snap is breaking records from Minnesota to Florida, it will not go down in history as the most significant Arctic outbreak in U.S. history, not even by a longshot. Scientists said the deep freeze gripping the U.S. does not indicate a halt or reversal in global warming trends, either. In fact, it may be a counterintuitive example of global warming in action. 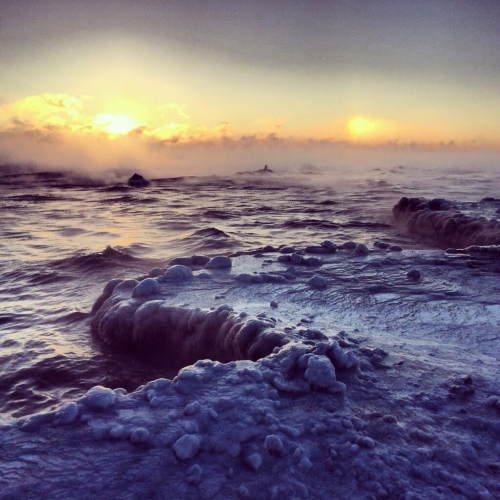 The frozen, steaming surface of Lake Michigan viewed from a frigid Loyala Park Beach in Chicago at 8 a.m. on Jan. 6.
Credit: Twitter/Alex Hall.

Researchers told Climate Central that the weather pattern driving the extreme cold into the U.S. — with a weaker polar vortex moving around the Arctic like a slowing spinning top, eventually falling over and blowing open the door to the Arctic freezer — fits with other recently observed instances of unusual fall and wintertime jet stream configurations.

MORE:
Extreme Cold is Becoming More Rare in Much of U.S.

Such weather patterns, which can feature relatively mild conditions in the Arctic at the same time dangerously cold conditions exist in vast parts of the lower 48, may be tied to the rapid warming and loss of sea ice in the Arctic due, in part, to manmade climate change.

Arctic warming is altering the heat balance between the North Pole and the equator, which is what drives the strong current of upper level winds in the northern hemisphere commonly known as the jet stream. Some studies show that if that balance is altered then some types of extreme weather events become more likely to occur.

During the past week, while much of North America has seen frigid temperatures, weather maps show a strip of orange and red hues, indicating above-average temperatures, across parts of the Arctic, Scandinavia, Europe and Asia. 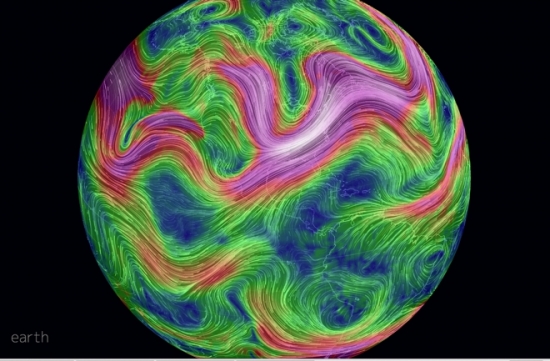 Visualization of winds at the jet stream level on January 6, showing a deep dip or trough in the jet stream above the U.S., transporting Arctic air southward.
Click image to enlarge. Credit: Earth/Cameron Beccario.

The forecast high temperature in Fairbanks, Alaska, on Monday was in the 20s Fahrenheit — warmer than many locations in Georgia and Alabama. That fits in with the so-called “Arctic Paradox” or “Warm Arctic, Cold Continents” pattern that researchers first identified several years ago. Such patterns bring comparatively mild conditions to the Arctic while places far to the south are thrown into a deep freeze.

“I do think that what has happened in the North America, including the U.S. this winter, so far fits under the paradigm of ‘warm Arctic cold continents,’ ” Judah Cohen, a climate forecaster at Atmospheric and Environmental Research in Massachussetts, said in an email.

The warmth in the Arctic made headlines in early December when the temperature hit 39°F in Prudhoe Bay, north of the Arctic Circle. That was the highest December temperature on record there since at least 1968, according to the National Weather Service.

Cohen published a study in September that found this Arctic paradox pattern has become common in years with low fall sea ice cover and rapidly advancing fall snow cover across parts of Asia, and that there is a likely link between the trends. The paper found the pattern was observed during the winter of 2012-2013, following the lowest fall sea ice extent on record in September 2012.

The Arctic has had a mild winter so far, in part because of an area of high pressure in the North Pacific Ocean that has blocked the flow of weather systems like a stop sign at an intersection, forcing the jet stream northward over western Canada, and then back down to the southeast across the U.S. That favors episodic outbreaks of cold air in the East, Cohen said, but not extended cold.

Jennifer Francis, a researcher at Rutgers University and the most prominent proponent of the hypothesis that Arctic warming is altering the jet stream around the Northern Hemisphere, told Climate Central that while the cold snap is brief in duration, it fits with patterns observed this year and in other recent years.

“The persistence of the pattern seems consistent with an amplified jet stream configuration that we expect to see occur more frequently as the Arctic continues to warm disproportionately,” Francis said in an email.

However, much of the evidence put forward thus far has shown correlations between sea ice loss and particular weather patterns, but has not revealed the direct physical connections and causation between the two, leading many mainstream climate scientists to be skeptical of the work so far.

The state of the science on the links between Arctic warming and weather extremes in the midlatitudes can be likened to a court case. Scientists have gathered reams of mainly circumstantial evidence to prove a suspect’s guilt, or in this case, the existence of an Arctic warming link. But such evidence, which comes in the form of published studies in peer reviewed scientific journals, may not be enough to convince a jury quite yet.

Regardless of the strength of the Arctic connection, global average temperature trends tell a clear and compelling story of a warming planet, which one short-lived cold streak is not going to alter.

Since 1970, winters have been warming rapidly in the majority of the lower 48 states. The five most rapidly warming states, with winter average temperatures increasing by more than 4°F, were Minnesota, North Dakota, South Dakota, Vermont, and Wisconsin, according to a 2013 Climate Central analysis. Many of those same states are bearing the brunt of the ongoing cold outbreak, but had the climate not warmed so much during the past few decades, it’s possible that this event would be even colder in those areas.

Global surface temperature departures from average during the past 30 days (through Jan. 4, 2014), showing the above-average temperatures throughout much of Europe, Asia, and the Arctic.
Credit: NOAA/ESRL.

November, the most recent month for which global data is available, was the warmest such month on record, all but guaranteeing that 2013 will go down on record as one of the top 10 warmest years, if not in the top 5. In Australia, 2013 was the continent’s hottest year on record.

Russia had its warmest November since records began there in 1891, with some parts of the country, including Siberia and the Arctic islands in the Kara Sea, seeing temperatures that were more than 14°F above the typical monthly average. In contrast, not a single region of the world was record cold for the month.

November also brought the string of consecutive above-average months on the planet to 345, with it being the 37th straight November with above-average temperatures compared to the 20th century average. That means that anyone younger than 28 has never experienced a colder-than-average month, globally speaking. The last below-average November global temperature was in November 1976, and the last below-average global temperature for any month was February 1985, according to the National Oceanic and Atmospheric Administration.

As unusual as the current cold is for the U.S., the global picture shows that January is not on course to break that 28-year warm streak, either. Even the U.S. may end up having a warmer-than-average month, if the latest outlooks prove correct.

Relateds
While Most of U.S. Froze, Parts of Alaska Set Record Highs
2013 on Track to be Seventh Warmest Year Since 1850
In Australia, 2013 Was a Scorcher for the Record Books
Study Adds to Arctic Warming, Extreme Weather Debate
Arctic Outbreak: When the North Pole Came to Ohio
Coldest Air in Decades Clearing Customs, Entering U.S.