Mid-July is typically when places from Colorado to Minnesota to New Jersey see their warmest temperatures of the year, but thanks to an incursion of cold polar air, parts of the eastern U.S. will see the mercury dip 5 to 25°F below normal this week. 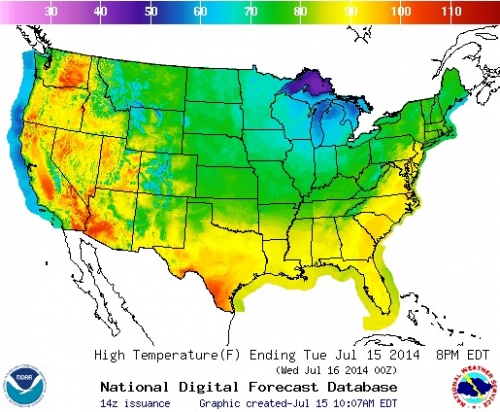 The forecasted highs (in degrees Fahrenheit) for July 15, 2014, expected after a cold air incursion into the eastern U.S.
Credit: NOAA

But as far as the National Weather Service is concerned, don’t call it a Polar Vortex. Other meteorologists are more comfortable with using the term in relation to this event.

The event, while not unprecedented, is unusual, and follows a pattern of “cold east, warm west” that has been in place over the Lower 48 for much of the year. But this cold air invasion has different roots than the “Polar Vortex” events of the winter months, according to NWS forecasters.

And though both types of events have brought unseasonably cold temperatures, and the relative cool over much of the country this year has kept 2014 in the middle of the ranks temperature-wise, a warming world has meant that the pace of record highs is well ahead of record lows across the U.S. overall in recent years. (The West has been the notable exception this year, with sustained warmer and drier-than-normal conditions, leading to an intense drought. The conditions continue there this week, as a corresponding warm area has set up on the western side of the cold air incursion.)

This cold air push got its start as two separate air masses—one over the North Pacific, one over Canada—that combined and invaded southward. The event is a tropospheric one, meaning it is taking place in the lowest layer of the Earth’s atmosphere, the one in which most weather takes place. The polar vortex events of the winter were stratospheric events: The vortex itself is an upper-level atmospheric feature of cold, low-pressure air surrounded by strong winds that circle the pole. When something causes those winds to weaken, the cold air can “leak out” and send frigid temperatures on a southward march.

The current event “is nothing like that,” said Bruce Terry, lead forecaster for the National Weather Service.

The polar vortex is “definitely up there at the pole, where it’s supposed to be,” Terry told Climate Central.

Meteorologist Jason Samenow at the Capital Weather Gang, however, argues that the clear Arctic influence on the cold incursion makes the “polar vortex” term apt.

The trough of cold air began invading the Lower 48 Monday morning. The high temperature in International Falls, Minn., was 62°F, whereas the average high for the date is 77°F. The NWS reported a record low temperature for Twin Cities International Airport of 65°F, beating out the previous record of 68°F set in 1884.

And the trough is moving slowly, gradually expanding to the south and east, so temperatures will be at least somewhat depressed over much of the eastern half of the country for a couple of days. The core of the cold will remain in the Great Lakes region and the Midwest, though. 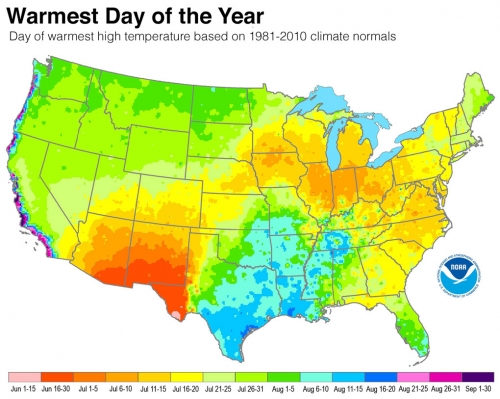 This map shows when summer temperatures reach their peak for different areas of the country based on climate data from 1981-2010.
Click image to enlarge. Credit: National Climatic Data Center

“It is an anomalous pattern,” Terry said. “It’s going to be quite chilly through the Great Lakes and the Midwest for the next couple days.”

Helping keep temperatures down in the Midwest are cloudy conditions, Terry said. “It’s overcast; they’re not getting any sun.”

Regions to the south and east will likely see sun along with the influx of cold air, meaning temperatures there won’t dip quite as drastically.

“The departures from normal get less as you go further south and east,” Terry said.

The deviations from warmer weather are also likely be shorter in duration than during the winter events, because the snow on the ground then helped the cold air linger. “In summer, you don't have that mechanism to sustain cold air near the surface,” said Bob Henson, a science writer with the National Center for Atmospheric Research in Boulder, Colo.

The influx of chillier air will bring relief to some areas that have been warm and humid in recent days, though summer overall has been fairly balmy across much of the country (with key exceptions in the Southwest). Terry attributes the lack of days-long scorchers to the fact that no high-pressure ridge has built up across the country. These ridges typically bring stable, cloudless conditions that send temperatures soaring.

In general this year, the eastern U.S. has been relatively cool. In fact, the first four months of the year were the coldest such period since 1993, though they ranked only 46th coldest in the 120-year temperature record. It is thought that global warming reduces the impact of such colder periods, as it decreases the chances of seeing record lows and increases the chances of seeing record highs.

“Of course, you'd have to do an attribution study to know whether [global warming] changed the odds of an event like this week's being more intensely cold,” Henson wrote in an email.

But not everywhere in the country is seeing the temperature drop. Warm, dry conditions have set up over the West as the yin to the cold incursion’s yang, potentially exacerbating the impacts of the serious drought in places like California. Such effects would come not from further missed rain, as it is the dry season there, but because “anything that boosts temperatures will exacerbate the evaporation that dries out soils and helps deplete reservoirs,” Henson said.

“More so than winter, this type of pattern in the summer/dry season serves as a major amplifier in that impacts can be accelerated even more so given this is the high demand season for water across the country as a whole, and in particular, in the arid West,” said Mark Svoboda, a climatologist with the National Drought Mitigation Center in Lincoln, Neb.

On the flip side, Svoboda said, the cooler conditions in the middle of the country could result in lower demands on water systems, reducing the pressure on drought-taxed resources there, at least for a couple of days.