Picture This: So Much Snow

Snow, snow and more snow seems to be the story for the Northeast right now. After a major nor’easter dumped up to 2-3 feet of snow on parts of eastern Long Island and Massachusetts early in the week, another system came through on Friday to provide a fresh coating of white, while yet another storm is expected early next week. We featured a roundup of some of the best pictures of the nor’easter earlier in the week while the storm was still raging, so we thought we’d share more amazing views that emerged after the winds had settled.

Feet of Snow in a Few Minutes

While many of the still images taken of the nor’easter showed off its incredible power, nothing beats time-lapse photography for showing the buildup of the snow. Here’s one from Boston:

Look at it pile up!

And there’s no better way to show the full extent of the snow than by satellite. In this image taken by the Suomi NPP satellite on Jan. 28, snow blankets a broad swath of the region, from the Appalachians to the tip of Long Island up to Maine: 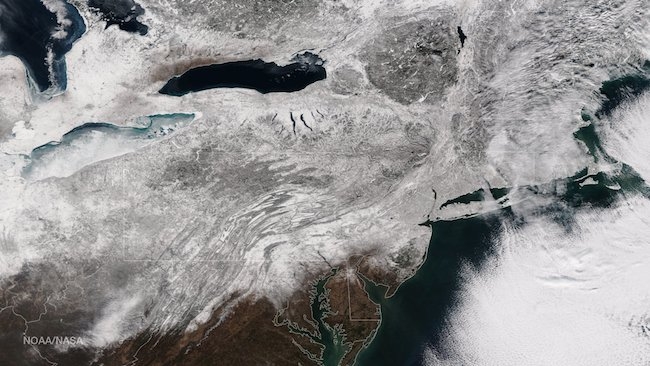 Snow blankets the Northeast on Jan. 28, 2015, after a major nor'easter storm dumped several inches to 3 feet of snow across the region.
Credit: NOAA

Up to 3 feet of snow fell in the worst-affected areas of Massachusetts.

And a second round of snow moved across some of the same areas on Friday, topping off the piles of dirty snow and sludge with fresh white flakes. The scene in New York was caught from above:

Aerial view of the new #snow cover over NYC area. Another winter storm headed this way for late Sunday into Monday.

While the snow made for a picturesque winter day at the White House in Washington, D.C.:

While many adults grumbled about messed up commutes and shoveling, kids broke out the sleds to enjoy a snow day. Dogs, too, got out to enjoy some frolicking:

Well, this one didn't seem too pleased:

I am in love with this grumpy Boston dog. http://t.co/bisCwDPi50 pic.twitter.com/zcCR4YK2fy

You May Also Like:
NASA’s $1 Billion Soil Moisture Mission Ready For Lift Off
A Country Divided by Seasons and Warming
Find Out When the Coldest Day Usually Hits Your Town
What A Warming World Means for Major Snowstorms
Watch 28 Years of Old Arctic Ice Disappear in One Minute