Picture This: Hurricanes and Wildfires from Space

Winds and fire wrought havoc this week as wildfires exploded in Northern California and Hurricane Odile became the most powerful storm to strike Baja California. The devastation of both events was caught in poignant and impactful photos. But other images captured more peaceful tableaus, including the beauty of landscapes erupting in a riot of autumnal color.

The story of hurricane season has played out quite differently in the two ocean basins that affect the U.S., the Atlantic and northeast Pacific. In part influenced by the emerging El Niño conditions in the tropical eastern Pacific, activity in the Atlantic has been somewhat suppressed, while the Pacific has seen a spate of strong hurricanes that have hit places that aren’t as accustomed to seeing them, such as Hawaii and Baja California.

The latter suffered the brunt of Hurricane Odile this week, which made landfall as a Category 3 storm near Cabo San Lucas late Sunday, local time. It was the strongest known hurricane to hit the peninsula. Winds and storm surge sank boats in marinas, swamped beachfront real estate and tore apart vulnerable structures.

First look inside the Los Cabos Airport. No flights for a while. (Credit: @jimmyverduzco): pic.twitter.com/cC8gY2rs1H #Odile

Devastating losses at the marina. So incredibly sad for all the hard working people who made a living on these ve… pic.twitter.com/cCY25Et5SK

Meanwhile, in the Atlantic, Hurricane Edouard also achieved Category 3 status on Tuesday, but it posed no threat to land and subsequently weakened. It was the first major hurricane — defined as a Category 3 or — since Hurricane Sandy briefly achieved that status in 2012. It made for an impressive sight, particularly when seen from the vantage point of the International Space Station. 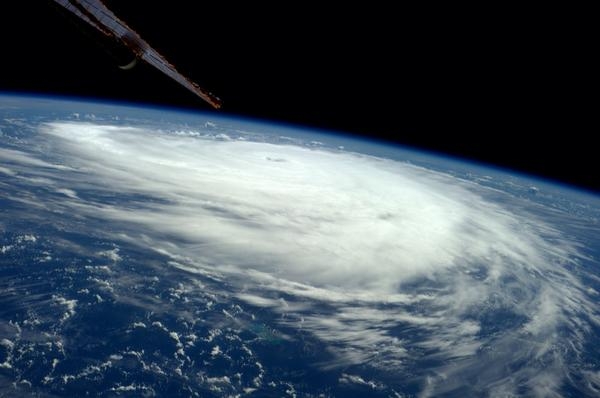 Astronaut Reid Wiseman snapped this photo of Hurricane Edouard from his perch on the International Space Station on Sept. 16, 2014.
Credit: NASA

Hurricane hunters got a closer perspective, snapping a picture from inside the hurricane’s eye as they flew through the storm to study its structure.

A look inside the eye of the first Cat 3 Atlantic hurricane in 2 years via @HRD_AOML_NOAA #Edouard pic.twitter.com/n7UUTYw7uW

Fires have been popping up across California since the winter. That's an unusual occurrence for the state, and they're being driven by relentless above-normal temperatures and a multi-year drought that ranks as one of the state’s worst. Tinder-dry vegetation provides ready fuel for flames, and concerns are heightened heading into the traditional fall wildfires season.

The massive King Fire, burning to the east of Sacramento in Eldorado National Forest, erupted on Sept. 13 and has rapidly expanded and merged with other fires. As of Friday morning, the fire covered more than 76,000 acres and was only 10 percent contained. The smoke traveled all the way to Idaho, making for a hazy sunrise in Boise…

Smoky sunrise in #Boise, #Idaho this morning as a result of the #KingFire in #California. #idwx pic.twitter.com/2dwgWhe1OZ

... and could even be seen from space. 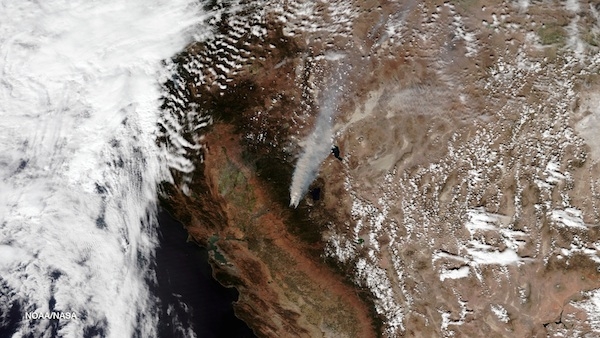 The Suomi NPP satellite caught this view of the King Fire burning in Northern California on Sept. 17, 2014.
Click image to enlarge. Credit: NOAA

Like other large wildfires, the King Fire has generated intense heat that has led to the formation of pyrocumulus clouds. The heat causes the air above the fire to rise, as fast-moving air currents bring in water vapor and ash. The water vapor condenses around the ash particles, forming clouds that resemble more standard cumulus clouds but take on a gray or brown tinge thanks to the ash.

Photographer Steve Ellsworth snapped a stunning image of the pyrocumulus clouds looming in the skies over Lake Tahoe.

While California has continued to bake in unseasonably warm temperatures, much of the rest of the country has enjoyed the first signs of fall, with cooler weather and the first trees to display the riot of colors synonymous with the season in advance of the Sept. 23 autumnal equinox.

The bright yellow leaves on these trees in Rocky Mountain National Park provide a punch of color to a breathtaking scene. 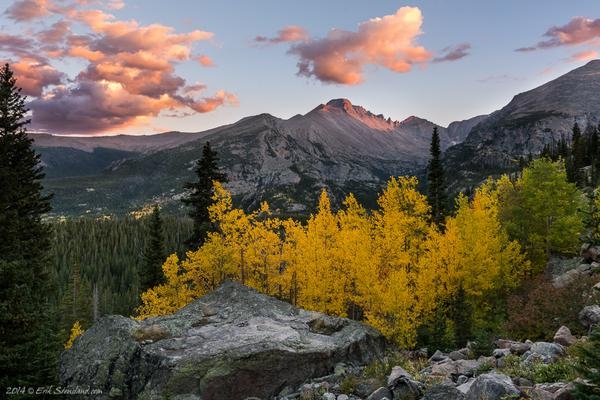