Picture This: Fire Clouds & A Slew of Pacific Storms

The weather has provided extreme bookends to the week, with a 1-in-500 year rainfall event washing out Mt. Baldy, Calif., in the middle of what is supposed to be the dry season, while a hurricane bore down on Hawaii for the first time in 22 years. The thunderstorms that unleashed the rains on California also produced lots of lightning that sparked wildfires. The hurricane, Iselle, would have been the first to directly hit the Big Island in the record books (going back to 1950), but was downgraded to a tropical storm before it made landfall on Aug. 8. The direct hit was still a rarity for the Hawaiian Islands. These and other weather events this week produced some stunning images, which we look back on here.

Yes, you read that right, and no, we didn’t just make that up.

Aerial photographer Jim “Hazy” Haseltine was returning home to base from a training mission with a group of F-15C’s from the 173rd Fighter Wing of the Oregon Air National Guard, he told Slate, when he flew over the Oregon Gulch wildfire, which had been sparked by lightning along the Oregon-California border. 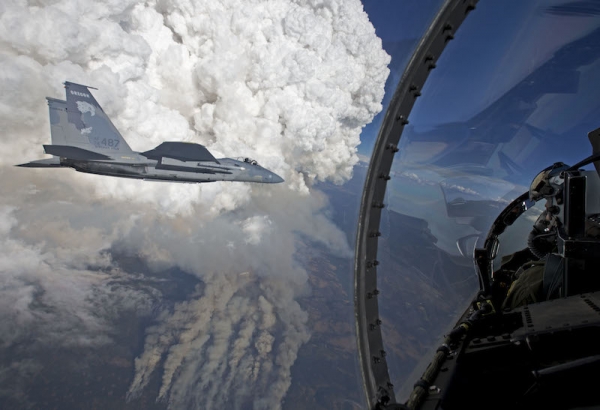 The storm produced towering pyrocumulus clouds, which form only around the intense heat generated by wildfires and volcanic eruptions. The heat causes the air above the fires to rise, and the fast-moving air currents bring water vapor and ash with them. The ash provides a surface for the water vapor to condense on, forming clouds that look like typical thunderstorm clouds, though the ash and smoke gives them a gray or brown tint that typical storm clouds lack.

Haseltine’s images show the fighter jets flying with him silhouetted against the pyrocumulus clouds in what could easily be a poster for an action-disaster movie. Move over, “Into the Storm.” 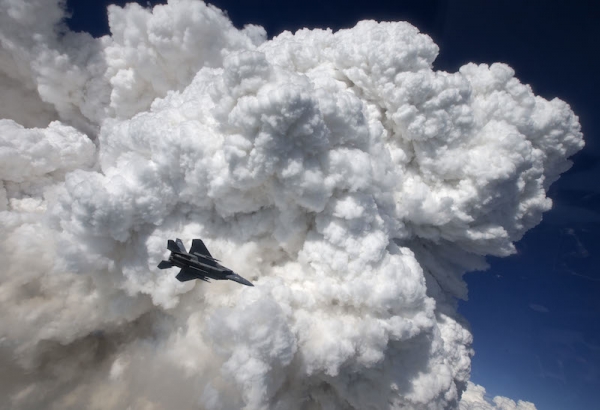 Halo Loop in a Hail Shaft

Because we apparently can’t get enough of rainbows in this space, we bring you a pretty cool type you may not have seen before.

Unsettled weather rolled through New England on Aug. 7, dropping hail in many places. One photographer caught a hail shaft (basically the column of hail dropping from a storm cloud) from afar, along with a rather lovely rainbow running across its middle near Gloucester, Mass.

Rainbows, and phenomena that look like rainbows but are called arcs, can form anytime you have sun and water droplets or ice crystal together in the sky. Rainbows form when these droplets or crystals reflect and refract the sunlight, separating its component wavelengths, which we see as different colors. The type of rainbow or arc you get depends on where the various components are in relation to each other, as well as the size of the droplets or crystals and their orientation to the incoming light.

Iselle wasn’t the only storm churning across the Pacific this week — not by a long shot. Three other storms were also plowing across the massive ocean basin, including: Hurricane Julio, which was trailing Iselle on its path to Hawaii; Hurricane/Super Typhoon Genevieve, which regenerated into a hurricane after it had devolved into a piddling tropical depression, and then crossed the International Dateline to become a typhoon; and Typhoon Halong, which was projected to hit Japan on Aug. 9.

Several satellites and other tools caught a view of all four storms lined up across the ocean, one after the other in a fairly rare setup.

The Pacific Ocean typically sees a more active season when an El Niño event is in the works, as one seems to be now, or is in place. The warmer waters that accompany the El Niño provide more fuel for burgeoning storms. That’s the opposite of the Atlantic Ocean basin, which is typically very quiet during an El Niño because the atmospheric effects of the phenomenon make for a stable and unfavorable environment for storm formation there.

While California has been suffering through a record-setting drought, at the other end of the country, Miami is on pace to tie its wettest summers on record. Climate change research has suggested that in a warming world, dry places like the Southwest will become drier, while wet places like Florida could become wetter.

Since June 1, Miami has recorded 33.6 inches of rain, Victor Murphy, the climate services program manager with the National Weather Service’s Southern Region, wrote on Twitter on Aug. 8. The normal amount by this point would be only 18 inches. The excess rain puts the city “neck and neck” with the summers of 1936 and 1966 to be the wettest on record.

University of Miami hurricane researcher Brian McNoldy got a great shot of one downpour over the downtown area on Aug. 5. 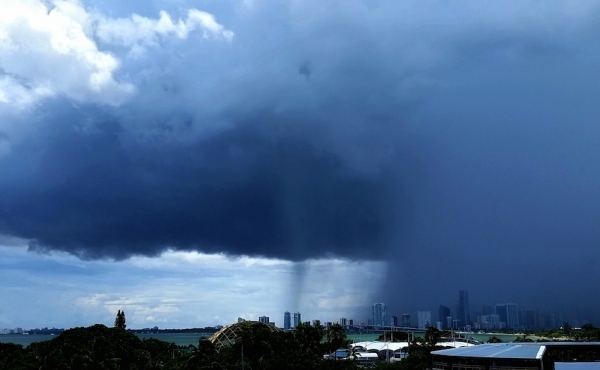 Hurricane researcher Brian McNoldy took this photo of a downpour in Miaimi on Aug. 5 from the University of Miami's Rosenstiel School (on Virginia Key), looking west across Biscayne Bay toward the downtown area.
Click image to enlarge. Credit: Brian McNoldy