These Photos of Lake Effect Snow Are Crazy

If you live in a broad swath of the country stretching from Portland down to El Paso, over to Atlanta and up to the Northeast, chances are you woke up this morning cursing the unseasonably cold weather.

Well, just be glad you don’t live in far western New York. (Unless, of course, you do. In which case, we’re sorry.) Areas just to the east of Lake Erie have been overtaken by a truly epic lake effect snowstorm that has already socked some places under 3 to 4 feet of the white stuff: 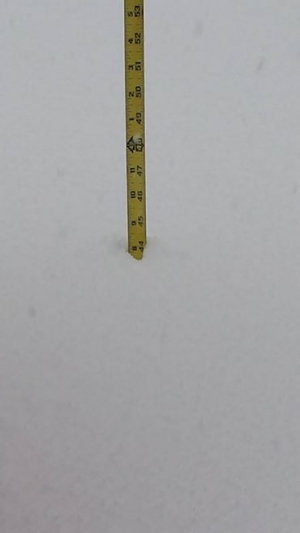 And it’s still coming down.

On Tuesday morning, the National Weather Service office in Buffalo increased its forecasted snow totals from the event to 70 inches in the worst hit areas. And no, that’s not a typo — 70 inches, as in nearly 6 feet.

Buffalo and its surrounding environs are certainly no strangers to lake effect snow, but this event is a doozy even for these snow-hardened souls, who took to Twitter and other social media to share their craziest photos, including buried cars, doorways snowed in up-to-waist level (complete with an imprint of the door) and snowblowers that just couldn’t hack it:

This might be my favorite pic from this impressive #lakeeffect snowstorm. By Mike Schnorr. Posted to @WGRZ FB page. pic.twitter.com/b4e9n5xCr3

Snowblower is like, to heck with this. RT @ashleyyy07: Too much snow for the snow blower in Alden #WGRZsnow pic.twitter.com/GoRb1l2c1w

According to NWS records, the snowiest November on record for Buffalo came in 2000 when 45.6 inches of snow fell over the course of a month. This storm is on track to smash that monthly record in a single day if the snow falls in the right spots.

The event began when Arctic air surged southward over the contiguous U.S. to the east of the Rocky Mountains for the second week in a row, breaking temperature records in some places. That frigid air swept over Lake Erie and the other Great Lakes, which are still relatively warm this early in the season, setting up a volatile lake effect situation that left a clear signature on satellite images:

Lake effect snow is the result of that cold, dry air moving over warmer water and picking up the moisture and heat, then dumping it as snow on the nearest downwind shoreline. In this case, that’s western New York. As the overall climate warms, lake effect snow has been increasing around the Great Lakes, because of less ice capping off the water. The situation Tuesday was so dynamic it even resulted in thundersnow in the Buffalo area, according to The Weather Channel.

Lake effect snow can come in bands, with one town receiving inches of snow an hour, while skies just a few miles away are clear. This contrast could be seen on both radar and in disconcertingly apocalyptic-looking photos of a wall of snow, which one meteorologist likened to a winter version of a dust storm:

#LakeEffect #snow band sharp north edge - how it has looked on radar & in photo by @KevinBuffalo / @WNYweather pic.twitter.com/MUktl2Obmz

Need a little more perspective on the power of lake effect snow? The 1981-2010 average November snowfall is 7.9 inches for Buffalo. This storm has the potential to drop nearly an order of magnitude more snow on the city.

Authorities have shut roadways in the area to all but emergency traffic, and it certainly looked from photos of stranded cars like staying home was the best (and maybe only) option:

That didn’t stop one man from trying to walk out in the drifts, which apparently didn’t go too well:

Another, Marquise Goodwin, a wide receiver for the Buffalo Bills, didn’t seem fazed by the piling snow:

This snow doesn't scare me… ��

Other residents have apparently waved the (snow) white flag: