SAN FRANCISCO — Not every year can be a record setter. But records are only one small piece of a larger puzzle that shows persistent change in the Arctic. And that change hasn’t slowed according to this year’s Arctic Report Card released at the American Geophysical Union’s Fall Meeting on Wednesday. 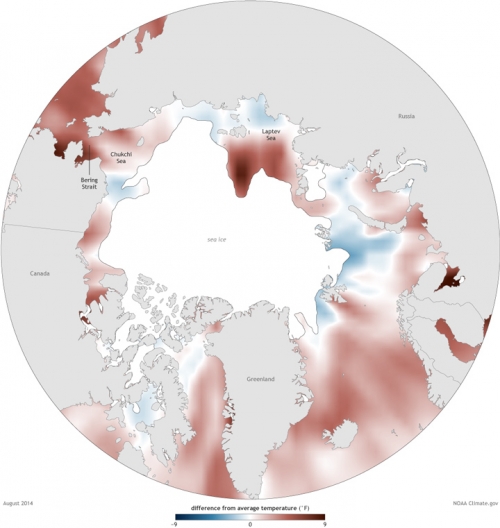 Long-term trends in rising temperatures, spiraling sea ice loss, and ecosystem shifts paint a picture of a region in transition due to climate change that is transpiring at a much faster rate than the rest of the globe.

“We continue to see the impact of a persistent warming trend on the Arctic,” Jacqueline Richter-Menge, a scientist at the Cold Regions Research and Engineering Laboratory, said. “The fact that we have that persistence (in observations) lets us see those signals become stronger.”

The Arctic has warmed twice as fast as the lower latitudes due to the buildup of heat-trapping greenhouse gases. This year’s Arctic Report Card shows the average temperature in the past year for the region ran 1.8°F above the 1981-2010 average.

That increase was driven by extreme heat in the winter when the polar vortex dipped into the continental U.S., which in turn, allowed warm air to leak into the Arctic. Temperatures skyrocketed to 18°F above normal in Alaska and up to 16°F above normal in parts of Greenland for January.

The long-term warming of the Arctic has contributed to a chain reaction of impacts on other parts of the Arctic climate system. The most notable impact is on the loss of sea ice, which hit its sixth-lowest extent on record in 2014.

While some have pointed to it as a sign of recovery compared to 2012’s record-low, the reality is that the September sea ice minimum has decreased by 13 percent per decade since 1979,  when satellite records began. Ocean waters in parts of the Arctic were also extremely warm at times this year, with temperatures up to 20°F above normal in August.

“You don’t have to reduce ice cover greatly to change the biological systems, oil and gas exploration, tourism, and national security issues,” Martin Jeffries, a science advisor at the Office of Naval Research, said.

With the U.S. taking over the chair of the Arctic Council — a group of eight governments with territory in the region — in 2015 for the next two years, Jeffries said it was a chance to show the public that the U.S. is an Arctic country and not just because of Alaska.

“The Arctic does matter to the Lower 48,” he said.

One of those areas of importance is understanding if the drop in sea ice and rising temperatures are also steering extreme weather toward the continental U.S. and other parts of the lower latitudes. Some research has tied the rapid changes in the Arctic, known as Arctic amplification, to creating a wavier jet stream that can stall weather patterns.

Temperatures anomalies in the Arctic and the globe.
Click image to enlarge. Credit: Arctic Report Card

Jim Overland, a scientist at the National Oceanic and Atmospheric Administration, said a wavy jet stream has been in place at times for each of the past five winters and the potential for an Arctic connection is there, but the jury is still out on directly attributing it to warming in the Arctic.

Other changes in the Arctic include above-average melt on Greenland’s ice sheet, although the ice sheet mass didn’t dip much due to increased snow in southeast Greenland.

Snow cover also disappeared 3-4 weeks earlier than normal in parts of the region, driven by warm temperatures. Declining snow and rising temperatures have also contributed to a 20 percent increase in plant growth across much of the tundra since 1982.

The report is the work of 63 authors in 13 countries. This year is the first time that the Arctic Report Card has identified seven key vital signs that will be updated every year moving forward, as well as a host of secondary indicators that will rotate in and out of the report every few years.

That could eventually help scientists actually assign a grade to the region, which is ironically missing from the current iteration of the report card.

“We could give the grade of incomplete (this year) due largely to the fact that it is an evolving story and really we need to continue our commitment to making observations over the long-term period,” Richter-Menge said.

You May Also Like:
Electric Cars a Mixed Bag For Health, Climate
Climate Accord Struck In Lima; Key Decisions Postponed
November in Books; 2014 On Pace for Hottest Year
Europe’s Record Heat Directly Tied to Climate Change