The Department of Defense sees climate change as an “immediate” risk and is taking steps to assess those risk and respond to them according to its newly unveiled Climate Change Adaptation Roadmap.

The document, released on Monday, is an update to the agency’s first climate roadmap released in 2012. But rather than being a slight tweak, it provides a major overhaul of how the military views the challenges that climate change poses in the near- and long-term to its training, operations, supply chains and infrastructure around the world. 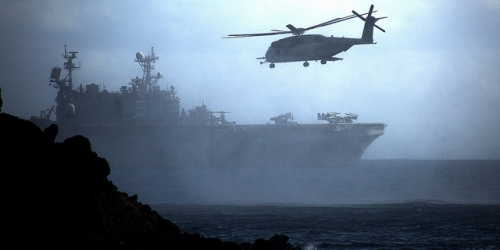 “This is the strongest language coming out of the Department of Defense we’ve seen. That represents an evolution of how they have been looking at this issue,” said Francesco Femia, co-director of the Center for Climate and Security, a nonpartisan think tank.

In his introduction to the roadmap, Secretary of Defense Chuck Hagel also referred to climate change as a “threat multiplier” that could increase the risk of disease and conflict in addition to affecting the military’s preparedness and operations.

Planning for those added risks is where Femia said the updated roadmap really breaks new ground and shows that the report likely represents concerns that are coming from the military base-level up to the White House and not just the other way around.

“The plan represents a broadening of the Department of Defense risk analysis. Climate change is not just a threat to military installations or supply lines, it’s a broader strategic security risk that can impact fundamental U.S. interests in the world,” Femia told Climate Central. “This is getting moved out of the environmental box and moving to a higher order realm of security risks.”

That means the Pentagon will have to consider not just how much seas and temperatures will rise or rainfall patterns will shift. It will also have to consider the cascading effects those changes will have on health, landscapes and society itself. Some research already points to how mosquito-borne diseases could become more prevalent, how climate change could increase the odds of conflict and how receding Arctic sea ice could open up a resource rush.

The Department of Defense has been thinking about climate change for years, with a heavy focus on how it could affect the $850 billion in infrastructure the department operates around the world as well as the long-term effects it could have.

A report earlier this year from the Government Accountability Office also found that military installations across the U.S. are already dealing with climate change impacts including rising seas, melting permafrost and more extreme precipitation. The report looked at 15 installations in the U.S. but there are more than 500 major bases worldwide and thousands of other installations, all of which face risks from climate change that could undermine readiness according to the new roadmap.

As climate projections improve, planners will have more information about how to address these multiple threats. Femia said the major hurdle for implementing plans to address them will be getting the funding needed to do so.

You May Also Like:
September Was Warmest on Record, NASA Data Shows
Where Is El Nino? And Why Do We Care?
2014 Extreme Weather: What Attribution Can Tell Us
The $9.7 Trillion Problem: Cyclones and Climate Change