The Montreal Protocol, a treaty enacted in 1987 to protect the Earth’s thinning ozone layer, has had the unintended benefit of helping to slow the rate of global warming since the mid-1990s, according to a new study published Sunday. The study, published in the journal Nature Geoscience, relies on a statistical analysis of global average temperatures as well as greenhouse gas emission trends, including chlorofluorocarbons or CFCs, which both break down ozone in the upper atmosphere and help warm the climate.

The study is unique in that it does not rely on the computer models used in most research to identify the causes of particular temperature fluctuations, which are broadly known as “climate attribution” studies, and its conclusions bolster the findings of many of the modeling studies. In tracing the emissions of greenhouse gases throughout the past century and comparing those records to global surface temperature data, the new study also showed that the two World Wars and economic depression, along with the post-World War Two economic boom, each had a unique influence on the global climate. 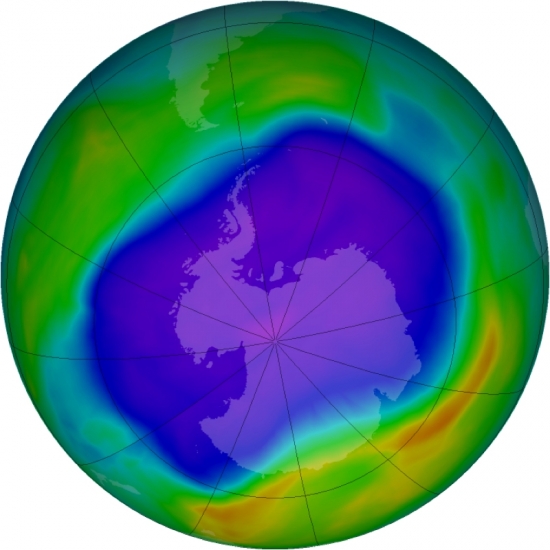 The largest ozone hole ever observed, in September 2006, shows a large area of depleted stratospheric ozone over the South Pole. A phasedown in the use of CFCs was enacted to reverse the loss of ozone, which protects the Earth from the sun's harmful ultraviolet radiation.
Credit: NASA.

During the economic depression that began in 1929, for example, greenhouse gas emissions declined, leading to a drop in the warming influence on the atmosphere, known as radiative forcing. In contrast, a jump in emissions since the 1950s led to a dramatic acceleration in global warming since the 1960s, the study found.

The study provides evidence that the Montreal Protocol was an effective climate treaty, albeit an accidental one, and it is the first to link the treaty to the recent slowdown in warming.  At the time the treaty was negotiated, CFCs were known to be greenhouse gases, but the treaty was not initially meant to address global warming, an issue that was just starting to gain public attention.

According to the study, the phase down in the use of CFCs during the 1990s into the early 21st Century, which was solely intended to reverse the loss of Earth’s protective ozone layer in the upper atmosphere, has shaved nearly 0.2°F of global warming since that time. While that may seem small, considering that the world has warmed by an average of about 1.6°F between 1901-2012, it is not a trivial amount.

“It is large enough to have contributed importantly to the (recent) slowdown,” said Francisco Estrada, a researcher at the National Autonomous University of Mexico in Mexico City and lead author of the new study. “What we show in this paper is that this slowdown in warming is part of the human intervention with the climate.”

The study also found that changes in agricultural practices in Asia, such as the introduction of different ways of cultivating rice, temporarily slowed the increase in emissions of methane, another greenhouse gas, further reducing the pace of warming during the past 15 years or so.

Put another way, the reduction in CFC emissions and slowdown in the rate of increase of methane is equivalent to cutting about 15 percent of the total radiative forcing from manmade activities since 1880, the study said.

However, the study implies that the slowdown in warming may be short-lived if greenhouse gas emissions grow more rapidly, which is already starting to happen. According to a new report from the World Meteorological Organization, after remaining level between 1999 and 2006, methane concentrations have been on the rise again, reaching a new high of about 1819 parts per billion in 2012, which is 260 percent of the pre-industrial level, the report said. That may lead to more rapid warming in the near future.

The new statistical study does not explain the entirety of the global warming slowdown since the late 1990s, but it does identify the previously hidden influence for the ozone treaty, which is already widely viewed as the most successful environmental treaty in history.

The study also comes at a sensitive time for environmental diplomacy, as the U.S. and other nations have been pushing for an amendment to the Montreal Protocol that would phase out the production and use of substitutes for CFCs that are also powerful global warming gases. These substitutes, which include hydrofluorocarbons, or HFCs, are set to skyrocket in use, particularly in the developing world. 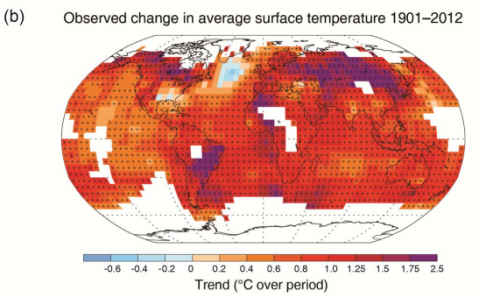 The observed change in average temperature from 1901-2012, showinng a global increase of about 1.6 degrees Fahrenheit.
Credit: U.N. IPCC.

While HFCs are not as harmful to the ozone layer as the chemicals they are replacing, they are efficient global warming gases that are hundreds to thousands of times more powerful at heating the planet than carbon dioxide, which is the main long-lived greenhouse gas. In fact, HFC-134a — the most popular HFC substitute and is used in vehicular air conditioning systems — has a global warming potential that is more than 1,400 times that of CO2.

A phasedown of HFCs would amount to avoiding more than 90 gigatonnes of CO2-equivalent through 2050, which is equal to about 2 years of current manmade greenhouse gas emissions, according to the State Department.

At the most recent Montreal Protocol negotiations in Bangkok in October, many countries supported the amendment, but they were blocked by India, which expressed concern over the cost of HFC substitutes.

Estrada told Climate Central in an interview that the new study “helps in the debate” regarding reducing HFC and HCFC emissions. “I hope it also helps with other climate negotiations . . . because this shows that international negotiations can actually achieve things, can actually be successful.”

He said that it’s “pure luck” that the Montreal Protocol ended up providing climate benefits, but that it has been more effective in reducing the rate of global warming than the Kyoto Protocol, even though the latter treaty was directly aimed at reducing greenhouse gas emissions such as CO2. “(It’s) kind of sad that the best that we’ve done for the climate has been a fluke' (that) we didn’t intend it,” Estrada said.

The next round of international negotiations toward a new climate treaty begin on Nov. 11 in Warsaw, Poland.