The ozone hole is a gash in the stratosphere, like a festering wound high above the earth’s surface. Scientists first diagnosed the problem in the mid-1980s and recommended a course of action to treat the problem. And today, NASA announced that recovery has continued, though slightly slower this year compared to years past.

“This is a good story for ozone. If you look back to 1998-2006 period, the last couple years are better than what we saw back then. We see that in size, the aerial coverage of the ozone hole and depth of ozone hole,” said Paul Newman, chief scientist for atmospheres at NASA's Goddard Space Flight Center.

This year’s ozone hole maximum topped out at 9.3 million square miles, or roughly the size of North America. That might sound bad, but it’s 2.2 million square miles smaller than the single-day record set in 2000. This year’s maximum is about on par with last year’s maximum, something Newman said is more likely due to year-to-year variability than a turn for the worse.

The ozone layer’s thickness also continues to grow since bottoming out in 1994.

At its minimum thickness this year, ozone was 114 Dobson units, up from a single-day minimum of 73 Dobson units in 1994.

Not familiar with Dobson units? How odd. In plain English, that means if you took the ozone layer from the stratosphere and brought it to the ground, this year’s minimum would measure a little more than a twenty-fifth of an inch thick or roughly the thickness of that credit card in your wallet. 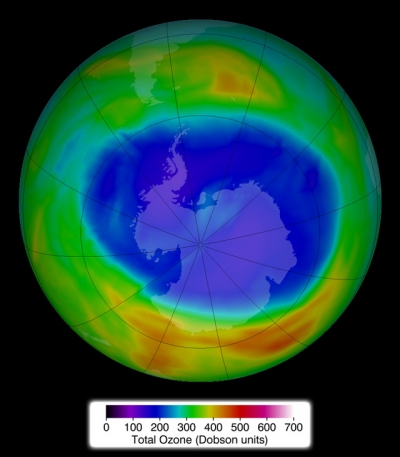 That impossibly thin layer performs an immensely important function of keeping harmful ultraviolet radiation at bay. Though the ozone hole is an issue over Antarctica, it’s impacts can spill into other parts of the stratosphere, the second layer of the earth’s atmosphere.

“When the ozone hole breaks up, it get smeared and mixed into other parts of the stratosphere. Think of it as a bucket of white paint. If you put a red dollop in the middle and stir it and everything turns pink,” Newman said.

That can increase the chances of harmful ultraviolet radiation reaching the ground over other parts of the globe, particularly the Southern Hemisphere.

Shifts in the size and thickness of the ozone hole also have an impact on the climate (though it bears repeating, the ozone hole is not equivalent with climate change). Some research has tied the ozone hole with shifts in Antarctic wind patterns and subsequent growth of sea ice in the region, though Newman said what's happening with Antarctic ice is still being actively researched. Those wind shifts have also likely masked some of the warming effects greenhouse gases have had on the rest of the planet. As the ozone hole continues to heal, temperatures could rise in the region, posing a bit of a double-edged sword.

The ozone hole was first reported by scientists in 1985 with the main cause linked to certain ozone-destroying chemicals, mostly used as refrigerants. In 1987, countries around the world created the Montreal Protocol, a plan to phase out those chemicals and restore the ozone to a clean bill of health. The plan appears to be working, though Newman said that more research is needed to determine the exact factors at play.