Overfishing and Pollution Kill Corals in a Warming World

In the wild worlds of coral reefs, seaweeds and corals are locked in mortal battles and scientists have revealed how overfishing, sewage and farm pollution can tip the balance in favor of the weeds.

Newly published findings from three years of field experiments in the ailing reefs of the Florida Keys have profound implications at a time when climate change is killing corals and threatening the very future of reefs worldwide. 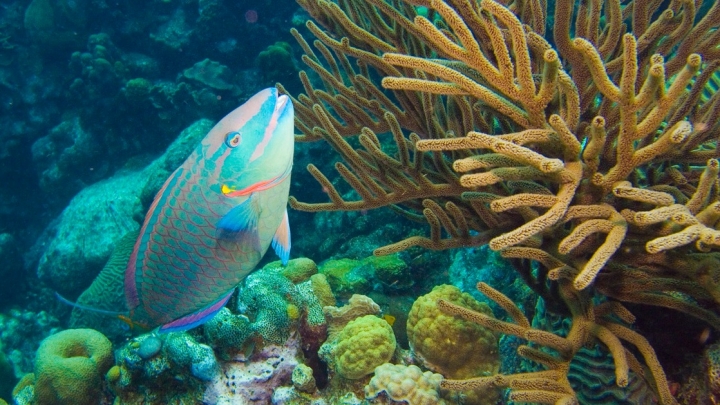 “This study gives very clear evidence that if there is overfishing or eutrophication, the corals are going to be more susceptible to increasing temperature,” said David Kline, a Scripps coral scientist who wasn’t involved with the study, which was published Tuesday in the journal Nature Communications. “That means that marine reserves and controlling and limiting pollution are important.”

More than half of the corals growing in some of the best protected reefs of the Great Barrier Reef were recently found to be dead, following the third and worst coral bleaching on record, which was caused by warm seawater. Coral mortality rates have been even higher in some other places.

Although warming waters are a global problem, the new study showed that problems under the control of national governments and coastal communities can make global warming far more dangerous for their local reefs.

In the Florida experiments, fatal impacts of pollution and overfishing on corals were worsened when water temperatures rose, such as in summer. After corals succumb and die, their colorless carcasses become covered with mats of algae. 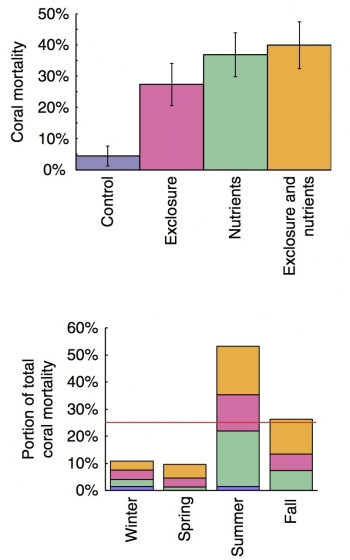 When fish were excluded or when nutrients were added, corals were more likely to die, and they were most likely to do so when water was warmest.
Credit: Zaneveld et al., Overfishing and nutrient pollution interact with temperature to disrupt coral reefs down to microbial scales, Nature Communications, 2016.

To simulate the effects of overfishing, the large team of scientists used cages to prevent parrot fish from reaching some of the Florida corals being monitored. Plant-eating fish like these graze on algae and other seaweeds, protecting corals from them.

The scientists wrote in their paper that seaweed populations “rapidly increased” after fish were kept away from the corals. That shaded out the corals, which need light to survive. Microbial analysis revealed additional problems.

“The big result was that if you excluded these herbivorous fishes that eat the seaweeds, you get really intense competition between the seaweeds and the corals,” said Deron Burkepile, a University of California, Santa Barbara ecologist involved with the research. “And that really changes the microbes that live on the corals.”

Mucus samples taken from the surface of the corals showed that the algae scrambled their microbiomes, making them more likely to harbor microbes that cause disease.

The coral microbiomes “always became more pathogenic” as algae took over, said Rebecca Vega Thurber, a microbiologist and marine disease ecologist from with Oregon State University who also worked on the research.

Vega Thurber said “you couldn’t predict” which pathogens would flourish. “That instability was what was really key. And that instability creates a vulnerability. They become vulnerable to climate change.”

To simulate the effects of sewage and farming water pollution, meanwhile, the scientists dripped garden fertilizer over some of the corals being studied.

That, too, took a heavy toll — in a way that surprised the scientists. 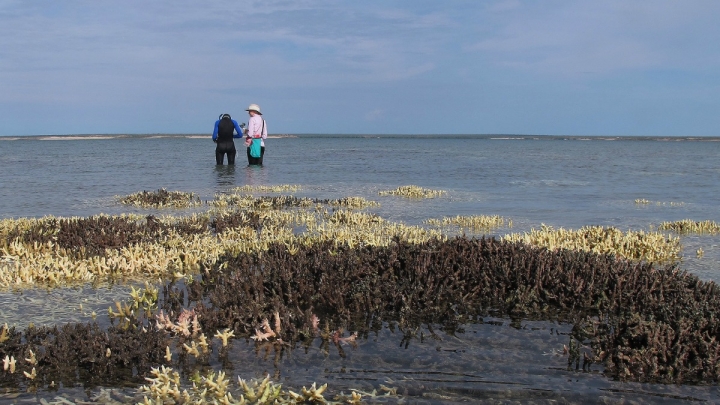 With countries like Australia facing criticism for failing to protect coral reefs from agricultural runoff and other types of nutrient pollution, the new findings showed that fish that are normally friends of the corals can be turned into inadvertent coral killers.

While parrot fish feed primarily on plants, they occasionally bite chunks out of corals, which provide them with animal proteins and some nutrients. The corals naturally heal. “Most of the time, corals are fine with that,” said Burkepile.

But the nutrient pollution appears to change the types of bacteria that grow on corals, meaning their wounds are more likely to become infected before they can recover.

“When we added in those extra nutrients, the corals that got bitten by those parrot fishes, almost two-thirds of those corals died,” Burkepile said.

Although the research showed that controlling pollution and overfishing can help corals survive in a warming world, the scientists said curbing pollution from fuel burning, farming and deforestation, which is causing water temperatures to rise, would be the best way to protect them in the long run.

“We have to start controlling carbon emissions and start cooling our planet again for coral reefs to really have a chance in the future,” Burkepile said.