Optimism for Crops in Midwest; Dire Straits in the West

When it comes to this year’s drought, it seems like good news never arrives without bad news to match. Even as drought receded from the Upper Midwest this week, conditions deepened and intensified all across the Southwest. Optimism that may emerge for crops in the Midwest from this week’s rains was tempered by the dire conditions of pastures and rangelands in the Southwest that have developed from months of a steadily growing drought.

This news comes from an update to the U.S. Drought Monitor, which was released Thursday. The update shows the drought shrinking overall – 46.07 percent of the continental U.S. is classified under drought this week, down from 47.66 last week – but the areas of extreme and exceptional drought in the South and West have grown. 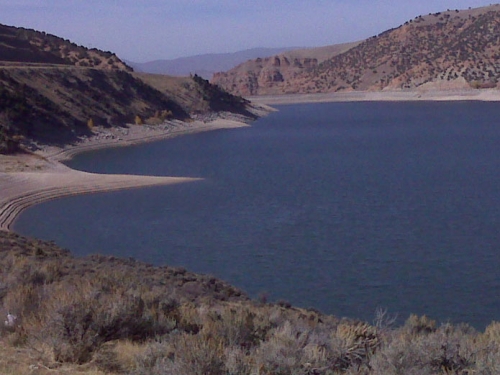 Reductions in drought occurred in the Upper Midwest and Northern High Plains, following a week of extreme weather swings. After a late-season freeze hit the region on May 12, temperatures soared into the triple digits, setting records for new daytime highs all across Iowa and Nebraska. Just a few days later, heavy showers and thunderstorms moved across the region, leading to major reductions in the coverage and intensity of the lingering drought conditions. Areas of severe and extreme drought shrank significantly all across Minnesota, Montana and the Dakotas.

That same systems of thunderstorms then passed over the southeastern Plains, and led to the elimination of drought in southeastern Oklahoma, and eased the severe drought conditions in east Texas. However, the storm system was also responsible for the outbreak of tornadoes in Oklahoma, including the one that tore across Moore on Monday.

The passing rains brought optimism for corn farmers, whose crops were decimated by the drought that began last year. The cold spring delayed planting this year, but farmers have been rushing to catch up. In the top 18 corn-growing states, farmers planted 43 percent of this year’s crop, tying a record for the amount planted a single week. If drought conditions continue to ease, there might just be a healthy corn crop this year. 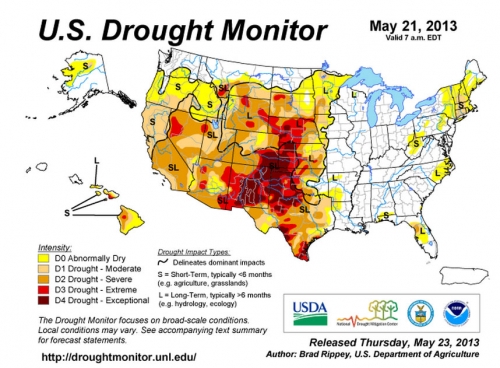 Conditions are far different out West. Less than an inch of rain fell over most of Utah, Colorado, Arizona, New Mexico and the western parts of Texas, Oklahoma and Kansas during the past seven days. As a result, drought conditions deteriorated across the region. Areas of severe drought expanded in the Four Corners area of the Southwest. The areas of extreme drought that have developed in the Texas panhandle over the past month slid into “exceptional” drought this week, adding to the growing patch of “exceptional” drought that now stretches across a half-dozen states.

And that portends bad news for western farmers and ranchers going into summer. In the West, pastures and rangeland are in dire straits. On May 19, the USDA reported that at least 40 percent of rangeland in seven of the 11 western states was rated poor or very poor. In addition, 53 percent of the nation’s cattle herds are in those seven states. The worst pasture conditions are in New Mexico (98 percent), but states like Nevada (69 percent), Nebraska (69 percent), and Arizona (63 percent) are not far behind.

The drought also continued to wreak havoc on the winter wheat crop in the southern plains (76 percent of the crop is rated poor or very poor in Texas, and just 31 percent is rated good or excellent nationwide). Reservoir levels all over the Southwest are at near-record lows, brought on by years of heavy irrigation and a decade of on-again, off-again drought.