‘Oldest Living Things in the World’ Tell a Tale of Climate

The spindly trunk of a Norway spruce reaches above the lichen-covered rocks. Nothing about the tree is remarkable aside from it being the only thing to reach more than a few feet off the ground on a windswept plateau. Yet Rachel Sussman traveled the roughly 3,500 miles from her Brooklyn studio to western Sweden to photograph it.

Its age is what drew Sussman to it. At 9,550 years old, this Norway spruce is the single oldest known tree on the planet. But it’s not just the age of the tree that matters, it’s what the image reveals.

“This 9,550-year-old tree is like a portrait of climate change,” she said. 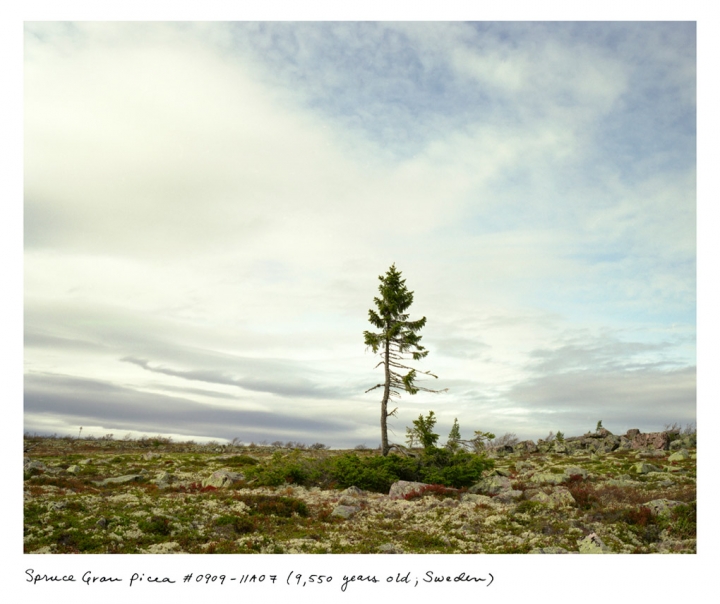 A 9,950-year-old Norway spruce.The mass of branches near the ground grew the same way for roughly 9,500 years, but the new, spindly trunk in the center is only 50 or so years old, caused by warming at the top of this mountain plateau in Western Sweden.
Click image to enlarge. Credit: Rachel Sussman

The image Sussman took graces the cover of her new book, “The Oldest Living Things in the World,” which hit bookstores today on Earth Day. The project has taken her across the globe over the past 10 years in an effort to capture images of the oldest species in the natural world. Her work shows both how they have developed and persevered over thousands of years while shedding light on how present human activities are changing those rhythms and endangering their very existence.

Sussman defined “old” as 2,000 years. The Declaration of Independence, the Mona Lisa, and the Magna Carta are all in their infancy compared to some of Sussman’s subjects. Many of them have been around for much longer, including a yucca plant in the Mojave desert in California that’s 12,000 years old and a sea grass meadow near Ibiza, Spain, that has been around for an incredible 100,000 years.

Longevity is about the only trait they have in common. Sussman’s subjects are spread over all corners of the planet, from California to Greenland to the Antarctic to the Atacama Desert in Chile. They include giant baobab trees and diminutive lichens and mosses. The 30 subjects in her book took her across thousands of miles covered by plane, taxi, helicopter, foot, Zodiac boat, and scuba diving. What kept her going through long layovers, missed contacts, and arduous treks was a belief in the power of the project to inspire people to ponder the deep issues the images raise. 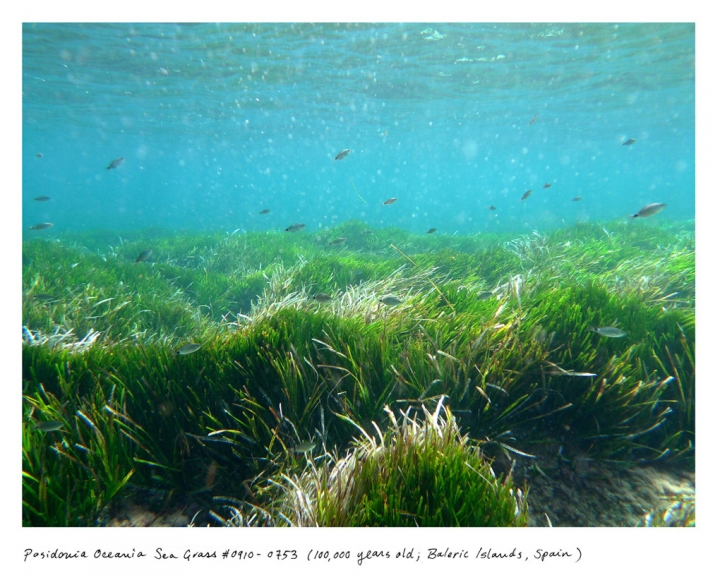 The Posidonia sea grass meadow is 100,000 years old, predating all of written human history and then some. It lives in the UNESCO-protected waterway between the islands of Ibiza and Formentera.
Click image to enlarge. Credit: Rachel Sussman

“There are only so many times you can talk about facts and figures,” she said in an interview at her Greenpoint studio. “This project is about climate change, art, science, and philosophy. It’s about allowing people to connect with things. And part of it is also just about being wowed.”

There’s certainly something wow-worthy about a 9,550-year-old spruce growing on a chilly plateau in Sweden. But the deeper climate change message can be seen in its trunk, which only shot up in the past 50 years. For the millennia prior to that, its branches grew slowly outward and crept close to the ground, an adaptation to the cold harsh winds that sweep across the mountain.

Biologists at Umea University in Umea, Sweden, who have studied this tree, which they nicknamed Old Tjikko after one of their dogs, believe that warming temperatures are one of the main reasons for the sudden upward growth. In this light, Sussman’s photo captures what climate change looks like in the early 21st century. The tree's future growth is still uncertain, though, as researchers expect regional differences in increased warming and precipitation changes will have different effects on Norway spruce across Scandinavia.

Bristlecone pines are also featured in Sussman’s book and like the spruce, they have an obvious climate change connection. 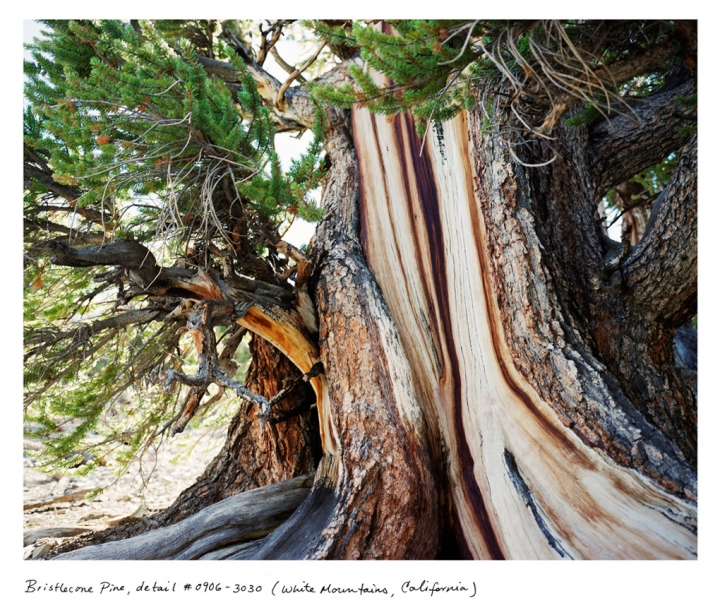 Bristlecone pines are the oldest non-clonal organisms in the world. Climate change is increasing their growth rate and threatening their habitat.
Click image to enlarge. Credit: Rachel Sussman

The pines grow in pockets in high mountains of the western U.S. and the oldest ones are around 5,000 years old. Bristlecones grow very slowly and take on a gnarled and knotty appearance that seemingly befits their age. Even their needles can last up to 40 years.

Like many of Sussman’s subjects, theirs is a story of survival by taking the slow road. Scientists have been using tree ring samples taken from these trees for years to gain a better understanding of past climates. The samples reveal that in the past 50 years, bristlecones have been growing about 30 percent faster than at any other time in the past 3,700 years. According to a 2009 study of the tree rings, the growth is “unmatched in millennia and is suggestive of dramatic environmental changes, most likely linked to increases in temperature.” It’s possible that the increased rate of growth could have unintended consequences and could weaken the tree's natural defenses that aid in its longevity.

Warmer temperatures are also disrupting other parts of the pines’ ecosystem. The most notable impact is the spread of mountain bark beetles into the high elevation zone the pines inhabit. The bitter cold acted as a barrier that protected the pines from beetles, but as temperatures have warmed, bark beetles have been spreading to the pines’ habitat.

For some of Sussman’s subjects, local human actions can be a more present danger. A 3,500-year-old cypress Sussman had photographed for the project met a sudden end in January 2012 when a group of people inadvertently set it on fire. Habitat loss due to deforestation, local air and water pollution, and the introduction of invasive species can all snuff out the long strands of time these species represent. 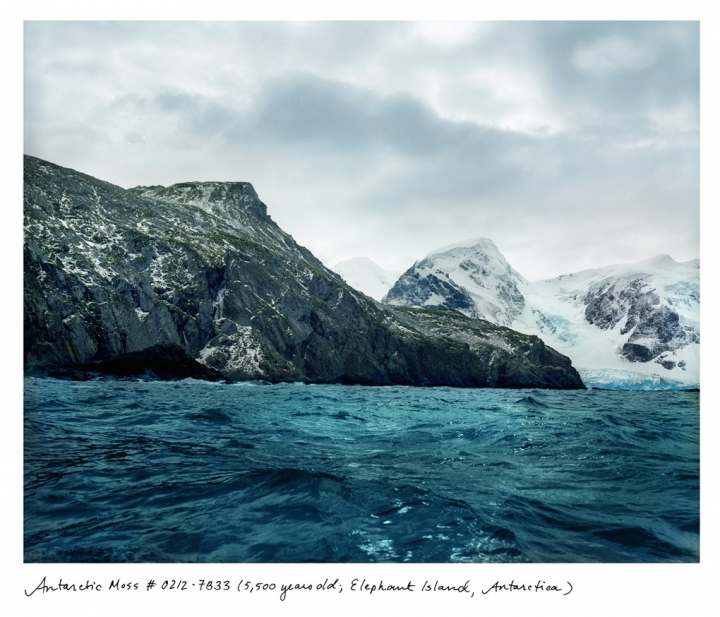 A 5,500-year-old moss bank lives on a cliff face right around the corner from where the Shackleton Expedition was marooned 100 years ago on Elephant Island, Antarctica. The last known visitors reached the moss in 1987.
Click image to enlarge. Credit: Rachel Sussman

The reality is climate change is likely to affect many of the species in Sussman’s book, but it’s not always clear exactly how. A patch of 5,500-year-old moss was discovered in Antarctica in 1987 and was so off the beaten path that nobody had likely visited it since. Its location is just around the corner from the landing spot of a more famous Elephant Island visitor, Ernerst Shackleton who was marooned there in 1915.

Yet Sussman wanted to find the moss and photograph it for her collection. Located somewhere on Elephant Island, Sussman said her odds of landing on the island and finding it were in the “single digits” in a New York Times blog post. Yet in February 2012, she found herself dropping from the decks of the sleek National Geographic Explorer into a Zodiac then skimming white knuckle over the frigid Southern Ocean waters toward the island. She became the first person to visit the moss in a quarter century yet could only spend 25 minutes photographing it before returning to ship. It's unlikely anyone will visit the moss again in the near future so understanding the impacts of climate change on it are likely to remain vague at best.

What we can say is that current greenhouse gas emissions have the planet on a trajectory to warm by as much as 9°F over the next century. The last time the Earth saw such rapid warming was around 55 million years ago, long before Sussman’s subjects laid down their roots. This century is likely to represent a break with the dozens of centuries of adaptations they’ve accumulated unless greenhouse gas emissions are slowed.

In that light, it might be easy to view Sussman’s work as an elegy, but that’s not her goal.

“It lets people see these as global symbols, as symbolic of the planet we live on,” she said. “(This is an) act of environmental conscience, but it’s not prescriptive.”

The prescriptive part is up to viewers and how they interpret and react to these symbols.