Old Masters’ Paintings Hide Clues to a Past Climate

By Lindsey Konkel, The Daily Climate

Deep red sunsets offer more than just a stunning backdrop for Old Masters' paintings: They can tell how dirty the air was when the painter picked up the brush. 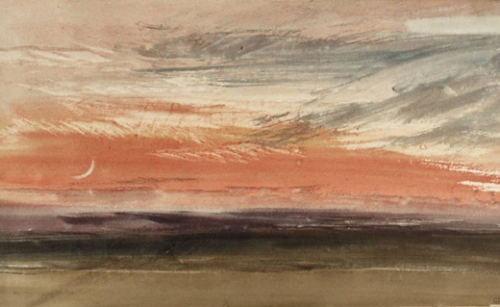 The degree of red in the skies depicted in historic paintings offers a proxy for pollution levels in the Earth's past atmosphere, according to a study published Tuesday. What's more, artists' sunsets have gradually gotten redder over the past 150 years, likely reflecting increased manmade pollution.

Colorful red sunsets may make for an attractive scene but are usually a result of particulates scattering the setting sun's rays. The deeper the red in the painting, the more pollution in the sky at the time, researchers say. Paintings done after volcanic eruptions, for example, have much redder skies.

“Nature speaks to the hearts and souls of the artists,” wrote the researchers. And art can help science:  “Paintings may provide reliable estimates on aerosols in the atmosphere at times before instrumental measurements,” Christos Zerefos, lead study author and professor of atmospheric physics at the Academy of Athens in Greece, said in an email.

Small particles, called aerosols, suspended in the atmosphere scatter sunlight so that sunsets appear more reddish. Aerosols can come from natural sources such as volcanic eruptions, forest fires or dust storms, or from manmade sources such as soot from car and truck engines.

German artist Caspar David Friedrich's 1818 painting “Woman before the Setting Sun” places the silhouette of a woman with outstretched hands under a deep ochre sky – a likely scene, the researchers say, given the 1815 eruption of Indonesia's Tambora volcano. That eruption scattered particles high into the atmosphere that produced bright red and orange sunsets throughout Europe for three years.

The effects of aerosols on Earth's climate are complicated. They can have a major impact on climate when they scatter light, cooling the planet in the case of the eruption of Mount Pinatubo in the Philippines in 1991.

Or they can absorb heat and, particularly with soot from diesel and coal smoke, hasten snow- and ice-melt.

In the study, published in the journal Atmospheric Chemistry and Physics, researchers from Greece and Germany analyzed 124 sunsets painted by European artists between 1500 and 2000. During that period, more than 50 large volcanic eruptions occurred across the globe. Zerefos and colleagues found that reddish hues in sunsets spiked during periods of volcanic activity.

They also found that depictions of sunsets have gotten redder from the Industrial Revolution onwards, even during periods of no volcanic activity. Artists, they suggest, are inadvertently capturing increases in pollution during the past 150 years.

“Aerosols have influenced Earth's temperature records. By correlating colors in paintings with aerosol optical depth, this study helps to validate historical temperature reconstructions,” said A.R. Ravishankara, professor of chemistry and atmospheric science at Colorado State University who was not involved in the study. 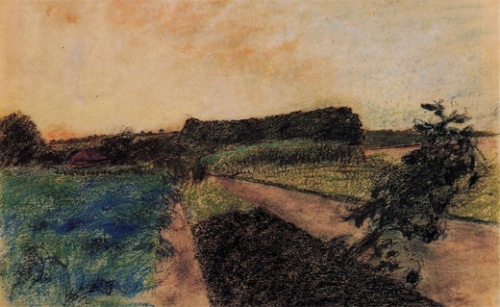 Landscape on the Orne, by Edgar Degas circa 1884.
Credit: The Athenaeum

To corroborate their findings, the researchers commissioned an artist to paint a series of sunsets from the Greek island of Hydra during and after a 2010 storm in Africa's Sahara Desert whipped up dust particles into the atmosphere and carried them over the Mediterranean. More pollution in the atmosphere correlated with more warm colors in the artist's paintings, they found.

“Early artists created an inadvertent record of climate change. That began to change around the mid-20th century when artists deliberately started picturing the explosion of the human footprint,” said William L. Fox, director of the Center for Art + Environment at the Nevada Museum of Art.

While brilliant sunsets may be one potential “upside” to smog, the harms clearly outweigh the benefits, added Ravishankara. “Do you want vibrant colors or better quality of air to breathe?”