Anyone living in Oklahoma planning to power their home using a rooftop solar panel will soon be charged a fee for the right to do that while still being connected to the local power grid.

Oklahoma Gov. Mary Fallin signed the “solar surcharge” bill into law on Monday, permitting utilities to charge an extra fee to any customer using distributed power generation, such as rooftop solar or a small wind turbine. 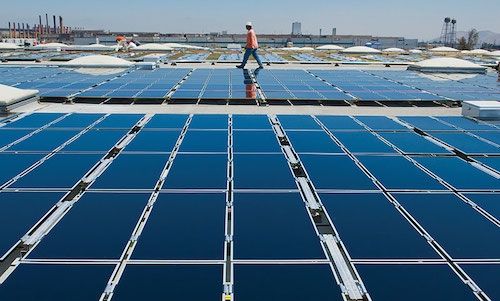 Distributed generation is seen in many parts of the country as a way for cities and homeowners to modernize their power system and become more resilient in the face of extreme weather, brought about in part by climate change. Rooftop solar and wind turbines generate clean energy to help to keep homes’ lights on when the power grid fails.

Oklahoma’s new law states that it is aiming to prevent the majority of utility customers from “subsidizing” those with solar panels on their homes who offset the cost of electricity and grid maintenance costs by generating their own power and feeding it onto the grid and receiving credit for the power they generate.

The practice of utility customers providing home-generated power to the grid and receiving credits for the power they produce is called “net metering,” and is legal in most states. But, it is something the electric power industry considers a threat to traditional utilities, which use centralized power sources that distribute electricity to customers via the power grid.

“Right now, a distributed generation customer is really paying less for the maintenance of the infrastructure than our other customers,” despite the up-front costs of installing solar panels on a roof, said Kathleen O’Shea, spokeswoman for Oklahoma Gas and Electric, or OGE, one of the state’s largest utilities.

“As solar prices come down and this becomes more popular, we want to make sure everybody who’s using the grid is paying their fair share,” she said, adding that it’s unfair for the utility’s traditional customers — roughly 799,600 of them — to foot the bill for grid maintenance when several hundred people end up saving money by using their own solar panels to provide power to the utility while not paying the grid maintenance surcharge.

“It’s kind of like, let’s get this done now before we are suddenly having 20,000 customers,” O’Shea said.

While OGE and other utilities say it's unfair that wind and solar owners aren't being charged for grid maintenance, those owners aren't getting compensated for the excess clean power they put into the grid for everyone else to use. And it doesn't take into account the upfront costs of installing solar panels or wind turbines themselves.

Here's how it works if you're an Oklahoma OGE customer today, according to OGE's net energy billing schedule: If you own a wind turbine in your yard, the power you produce is metered and feeds into the grid. OGE will give you a power credit on your next monthly bill based on the kilowatt hours of wind power you've supplied to the grid. If your home uses fewer kilowatt hours of electricity than the amount of electricity produced by your wind turbine, OGE bills you for the electricity it provides to you. If your turbine generates more kilowatt hours than your home consumes, OGE will only give you credit for the power you consume and provide no compensation for the excess electricity you've provided to OGE free of charge.

Oklahoma regulators will eventually create a separate utility customer class for people using rooftop solar or small wind turbines so they can be charged separately from traditional customers. Anyone using solar or wind at home before the new law takes effect this fall will be grandfathered in and won’t be charged the new fee. 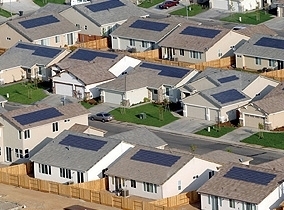 “This legislation is discounting the value of distributed power,” said Whitney Pearson, associate field organizer for the Oklahoma chapter of the Sierra Club. “In peak periods like summer months, solar helps reduce demand on the grid when utilities worry most about meeting customer needs.”

She said she believes large utility companies are afraid that solar and wind power threaten their business model, so they’ve turned to the state Legislature to discourage property owners from installing their own power generation.

O’Shea said she is unsure what role distributed generation should play in providing electricity to Oklahoma residents in the future, but she said she’s sure rooftop solar and wind will be a “big thing for all the electric industry.”

“At this point, we’re all still trying to figure out how and when,” O’Shea said. “I do know that it’s out there, it’s coming. It’s not something we even want to try and stop.”