The climate hazards of shale oil development in the U.S. and Canada are indisputable: Producing and burning shale oil emit large amounts of greenhouse gases that fuel climate change.

Shale oil's other hazards, however, have begun to capture far more attention. That's because recent train derailments have made painfully clear the dangers of just getting that oil to refineries.

First, it was an oil train derailment in Lac-Mégantic, Québec, on July 6 that was visible from space and killed 47 people. Another train derailed and exploded in Aliceville, Ala., on Nov. 8. And another went off the rails in Casselton, N.D., on Dec. 30. The latest was in Plaster Rock, New Brunswick, on Jan. 7.

They have produced frightening images — most recently, the fiery mushroom cloud rising above the wrecked BNSF Railway train in Casselton carrying North Dakota Bakken shale crude — likely to symbolize the risks associated with fracking, and producing and transporting crude oil in the U.S. and Canada.

But with crude oil production in the Bakken shale booming and the U.S. State Department still considering approval of the Keystone XL Pipeline, which would bring both Bakken oil and Canadian tar sands oil to refineries in Texas, rail will likely continue to be a mainstay of crude oil shipping throughout North America. Today, a lack of oil pipelines in North Dakota and Alberta forces the industry to ship most of the Bakken and Canadian tar sands crude by rail.

Crude oil production from both the Bakken shale and the Canadian tar sands also comes with huge climate implications. Crude from both sources is extremely energy intensive to produce. Extracting crude oil from the North Dakota prairie involves hydraulic fracturing, or fracking, which is associated with an undetermined, but possibly high level of methane emissions in addition to the carbon dioxide produced from burning it.

Today, the crude oil production boom in the Bakken shale region of western North Dakota and eastern Montana, which was expected to hit 1 million barrels of crude oil production per day in December, is helping to fuel an “astronomical” spike in crude oil shipping by rail, said Anthony Hatch, an independent rail analyst based in New York City.

Railroads transported roughly 5,000 rail cars of petroleum products in 2006. Since then, oil shipping has risen to about 500,000 cars per year, he said.

Though accidents on the tracks can be explosive and fatal, major crude oil train derailments are fairly rare. Data from the American Association of Railroads, a trade group, show that more than 99 percent of hazardous shipments on freight trains reach their destination without spilling or exploding. Train accidents involving hazardous material releases declined 91 percent between 1980 and 2010, the group says.

Though the Keystone XL Pipeline is expected to ship much of the oil produced in the Bakken shale to Texas if the U.S. State Department approves it, rail will remain part of the backbone of crude oil shipping regardless, said former U.S. diplomat Steve Kelly, a visiting professor of public policy and Canadian studies at Duke University.

“First, North Dakota isn’t served with enough pipelines to move its rapidly increasing supply of crude, so some rail transport will be needed for the foreseeable future,” he said, adding that the energy industry is increasingly pessimistic that Keystone XL will ever be approved and are making alternate plans to get their crude to market, primarily using rail. 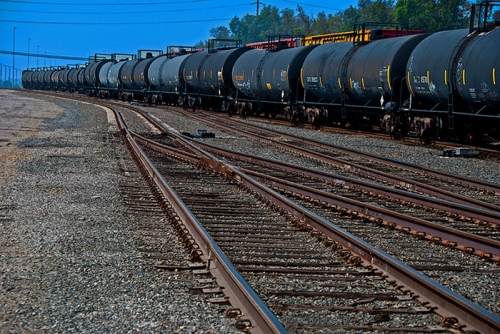 “A pipeline goes where it goes,” he said. “Using rail lines, buyers and sellers can move crude where they want it, when they want it. To some extent, this compensates for the higher cost of rail shipment over pipelines.”

The Keystone XL Pipeline is controversial partly because the Canadian synthetic crude oil and diluted bitumen the pipeline will carry from the Alberta tar sands to Texas have a huge carbon footprint and impact on the climate. Carbon emissions from burning oil from the Canadian tar sands could be up to 20 percent higher than for the average transportation fuel distributed in the U.S., according to a 2013 Congressional Research Service report.

Approval of the Keystone XL will provide increased pipeline capacity for Bakken crude, taking pressure off the rail systems, said Warren Mabee, associate director of the Queens Institute of Energy and Environmental Policy at Queens University in Kingston, Ontario.

“However, Canada is in a position where growth in oil sands production has outstripped development of transport infrastructure, which means that for the foreseeable future, we will still have large volumes of oil (conventional and bitumen) moving by train,” Mabee said. “Increased production from the Bakken field will also compete for pipe space and will keep the amounts of oil moving by rail high south of the (U.S.-Canada) border.”

“Every day, 5 percent of the (freight rail) volume is hazardous materials significantly more hazardous than crude oil,” he said. “They carry things like chlorine.”

The rail and energy industries are adamant that they’re doing what it takes to prevent future crude oil disasters.

American Petroleum Institute spokesman Brian Straessle said the energy industry is working with regulators and the rail industry to ensure oil shipping is as safe as possible.

“When the investigation into the Casselton derailment is complete and we fully understand what happened, as we always do, we will learn what we can to drive even more safety improvements,” said Steven Forsberg, spokesman for BNSF, the railroad involved in the explosive crash in North Dakota on Dec. 30. “Rail is the safest mode of land transportation for freight in general and is one of the safest ways to transport crude oil and hazardous materials. It is much safer to move hazardous materials by rail than by roads.”

As the federal government investigates the cause of the Casselton disaster and why Bakken crude oil appears to be more explosive than crude oil from elsewhere, industry watchers say they’re confident the recent spate of rail disasters will result in more stringent regulations governing the shipping of crude oil, possibly in both the U.S. and Canada.

“The issue with oil spills in the past has been local pollution, not fires and explosions,” Kelly said. “Whether this is due to the much-lower viscosity of Bakken tight oil, or due to additives, I don’t know. But if these trains are loaded time bombs, somebody is going to call for tighter controls.”

Before the U.S. Department of Transportation issued a warning about the volatility of Bakken crude, Canadian authorities declared Bakken crude oil an “unusually hazardous product” because of its volatility, and have required that shipments of the crude be classified among the most hazardous goods, Mabee said.

Canadians are less concerned about rail accidents than about the proposed shipping of tar sands oil to the country's West Coast, where it would be loaded into tankers and shipped overseas, said Michael Byers, Canada research chair in global politics and international law at the University of British Columbia in Vancouver.

Canadian oil shipments will continue to grow regardless of the fate of the Keystone XL Pipeline, and concerns about their climate and environmental impact will grow with them, Mabee said.

“The environmental consequences are significant — the oil sands production continues to be one of our problem areas in terms of emissions, and there are long-standing concerns over the oil sand sites themselves as well as the corridors for transport,” he said. “But I don’t think that the approval or cancellation of Keystone will change our production significantly.”