The Atlantic hurricane season usually hits its peak of stormy activity in early September, with more storms typically spinning up in that month than any other month of the six-month hurricane season. 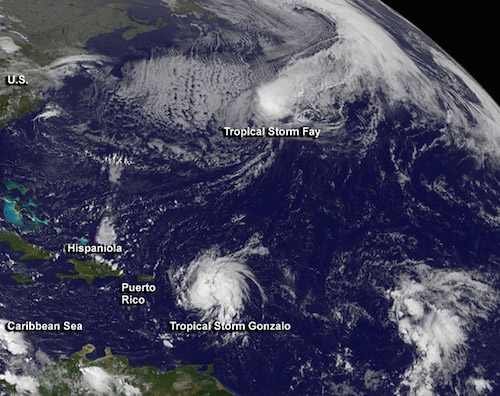 Tropical Storm Fay sits to the northeast of Bermuda in this image taken by NASA's GOES-East satellite on Oct. 13, 2014, as then-Tropical Storm Gonzalo swirled over the Lesser Antilles.
Credit: NASA

But after a couple storms early in the month, the basin went quiet for the rest of this September, even though that is the time when oceans reach their warmest temperatures, providing prime hurricane fuel. In recent days, though, hurricane activity has rebounded, with Hurricane Gonzalo currently headed toward a potential Category 4 peak strength just days after another tropical storm, Fay, reached hurricane status.

The abrupt one-two formation of these two Atlantic storms has happened during a time when the season is usually rapidly tailing off, and during what has generally been a quiet season, as was forecasted by the National Oceanic and Atmospheric Administration. Gonzalo is only the seventh tropical storm of the Atlantic season, meaning that one quarter of this season’s storms have formed within just the last week.

What accounts for the sudden uptick? “A lot of it’s due to the Madden-Julian Oscillation,” said Eric Blake, a hurricane specialist with the National Hurricane Center in Miami.

And what’s the Madden-Julian Oscillation, you may ask? Essentially it’s a wave of enhanced and then suppressed thunderstorm activity that works its way eastward across the tropics over about 30 to 50 days. (This same phenomenon is also playing a role in the tropical storm that could hit Hawaii, but more on that in a minute.)

During the climatological peak of the hurricane season, the basin was in “the quiet part of that wave,” Blake told Climate Central. Those suppressive conditions were superimposed on an atmospheric setup already hostile to storm formation.

“In general the climate conditions have not been that favorable at all” for hurricanes to form, Blake said. Part of this has been due to the burgeoning El Niño, that even though it has yet to fully emerge is creating more stable, subsiding air over the Atlantic and increasing the wind shear that can rip apart a budding storm.

So a sort-of El Niño plus a suppressive MJO phase equaled a quiet September.

But now, the enhanced phase of the MJO has come into the area, and it’s been a particularly strong one, Blake said.

“We’ve seen this type of thing happen before, it’s just rare,” he said.

The boost from the MJO has helped give storms a friendlier atmospheric environment in which to form, while ocean temperatures are still warm enough. 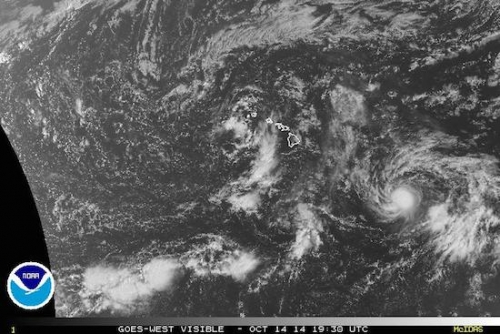 Tropical Storm Ana spins over the Central Pacific to the southeast of Hawaii on Oct. 14, 2014.
Credit: NOAA

“It’s still October, and October's a pretty busy month for hurricanes, and the Atlantic’s still plenty warm,” Blake said, though he added that the busiest October pales in comparison to the busiest September.

The nurturing environment is allowing Hurricane Gonzalo to really ramp up — it is expected to reach Category 3 status later on Tuesday, making it a major hurricane, and possibly Category 4 strength sometime from Wednesday to Thursday. (While Fay reached hurricane status, it did so for only a few hours on Oct. 12, though its rains lashed Bermuda.)

The storm being watched on the other side of the country, Tropical Storm Ana, is actually part of the same MJO-aided environment, essentially at the tail end of the wave, Blake said. Ana is also expected to strengthen, becoming a hurricane later this week and potentially impacting Hawaii. Ana would be the second storm to hit the Big Island this year if it does so, after Iselle slammed into the island in early August.

The favorable conditions in the Atlantic could last for another week or two, Blake said, and regardless, “we’re not done with hurricane season yet.” The season, which starts on June 1, doesn’t officially end until Nov. 30, and storms can form after that date.

Forecasters expected the 2014 Atlantic hurricane season to be a below-average one, though, and so far “the expectations have basically been met,” Blake said.