The Rise of El Niño in 1 Swell Image 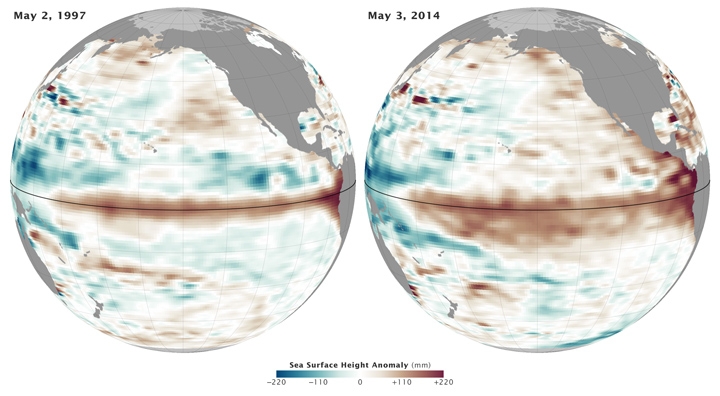 El Niño gawkers, rejoice. A new set of imagery provides an unmistakable view of the El Niño conditions that appear to be developing.

On Tuesday, NASA’s Earth Observatory released a map showing ocean heights in the tropical Pacific in early May compared to May 1997, the year an El Niño formed against which all other El Niños are measured. That year’s El Niño helped fuel extreme weather around the globe and contributed to 1998 being one of the warmest years in recorded history.

NASA’s image shows that while El Niño conditions haven’t yet formed, this year is following a trajectory similar to 1997.

El Niño is generally defined by an abnormal tongue of hot water stretching from the coast of South America into the Pacific Ocean. Currently, ocean surface temperatures in that region have been slowly warming, but they aren't close to El Niño levels yet.

The related measure of ocean height provides another way to look at El Niño and the conditions that precede it, and NASA’s satellites have captured a rise of water in the eastern Pacific. The map above shows areas where the ocean is higher than normal in reddish brown and lower than normal in green. The maximum rise is only about an inch off the coast of Central and South America, but that tiny tweak is a hint of bigger things underway.

The cause of the rise is that pool of very warm water working its way up from beneath the surface (or, less likely, Godzilla). Warm water is more voluminous than colder water, which causes oceans to rise. The swelling pool of water in that region is a telltale indicator that generally precedes El Niño.

Don’t get caught up in the El Niñopocalypse just yet. For all the signs an El Niño is on the horizon, it’s still too early to know just how strong this one could be or even if it will form. Scientists from the International Research Institute for Climate and Society issued a forecast on Thursday that shows the odds of El Niño being in place by this fall at 75 percent. While that’s high, it’s by no means a given.

Most models used to generate their forecast also indicate if El Niño does develop, it will be weak-to-moderate in strength. That comes with a caveat, though.

“Forecast are still uncertain, and a strong event cannot be ruled out,” IRI wrote in its forecast release.

In other words, don't freak out but don't toss out your El Niño preparedness kit just yet.