LONDON – Climate change could be about to alter life in the sea, according to new research in Nature Geoscience.

Researchers at the University of Southern California have been experimenting with common microbes, hoping to predict which will flourish in a warmer and more carbon dioxide-rich atmosphere.

The microbes are two genera of cyanobacteria. These tiny creatures – blue-green algae responsible for huge occasional “blooms” in the sea – are life’s bottom line: they fix nitrogen from the atmosphere and they photosynthesize atmospheric carbon to release oxygen, so they deliver staples for survival both for all plants and for all animals.

These microbes are everywhere. U.S. researchers recently charted the predicted change in cyanobacteria populations in the arid soils of the North American continent over the next century: now this second team has begun to look at life in the sea. 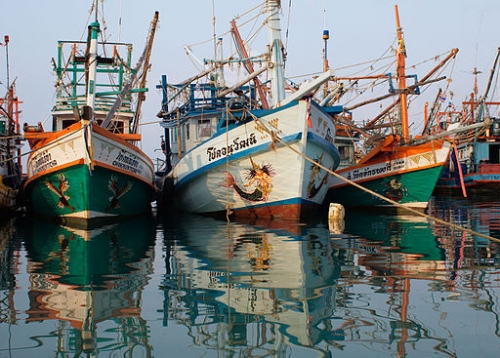 Fishing boats in Thailand. How will rising CO2 in the oceans affect their future?
Credit: apes_abroad via Wikimedia Commons

David Hutchins and colleagues studies two groups of nitrogen fixers; Trichodesmium and Crocosphaera: the first forms vast and often visible colonies, the second is harder to see, but is found everywhere.

They tested seven strains of the two microbes, from different locations in both the Pacific and the Atlantic Oceans, under laboratory conditions in artificial atmospheres that mimicked the predicted carbon dioxide concentrations under various climate scenarios.

The researchers found that as carbon dioxide levels rose, nitrogen-fixing productivity rose too, by up to 125 percent. But the responses varied according to the strain under test: some did better under pre-industrial conditions; some flourished as they neared the levels predicted for a “greenhouse” world.

The research demonstrates what any evolutionary biologist would have predicted: that environmental conditions “select” for particular species with the appropriate adaptations, and that as conditions change, so do populations. What it means in practical terms for the rest of the planet is less certain.

This is basic research which exploits the university’s large “library” of marine microorganisms, and establishes a baseline of data that will give some guide to ocean productivity in the future, but quite how it will affect the marine food chain – and oceans cover 70 percent of the planet, so it is a big question – is still to be established.

“Our findings show that CO2 has the potential to control the biodiversity of these keystone organisms in ocean biology, and our fossil fuel emissions are probably responsible for changing the types of nitrogen fixers that are growing in the ocean,” said Professor Hutchins. “And we’re not entirely certain how that will change the ocean of tomorrow.”