After David Goethel set out on his 44-foot trawler on a calm New England day last week, he caught a third of his cod quota for the year in about 10 minutes. In 2010, Goethel was allowed to land about 60,000 pounds of cod. This year, following a population crash linked to warming waters, his limit was set at a meager 3,700 pounds.

Oceans are sucking down most of the heat trapped by greenhouse gases, but the rate of warming has been especially high during the last decade in the Gulf of Maine, which is north of Rhode Island. The changes are driving down populations of commercially valuable cod in the waterway and ushering warmer water species into it.

New research using a next-generation computer model developed by the National Oceanic and Atmospheric Administration reveals that warming rates in the fishing hotspot could be three times the global averages during the decades ahead. 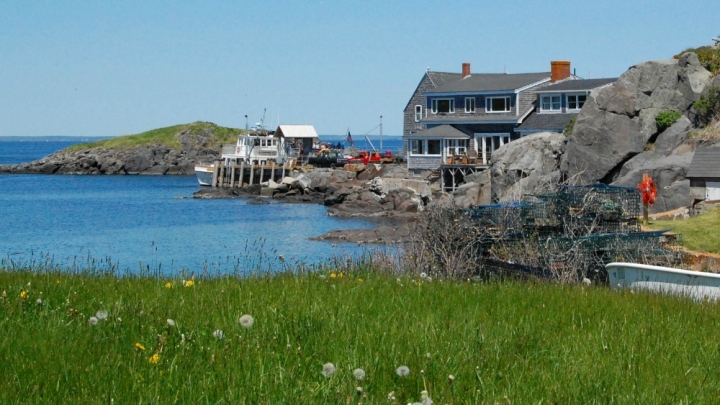 The waters of the Gulf of Maine are projected to continue warming more quickly than the rest of the ocean.
Credit: InAweofGod'sCreation/flickr

“There’s still a lot of cod around, but they’re in different places than where you’d expect,” said Goethel, who has been fishing for the cold water species in the Gulf of Maine since 1967. Last week’s outing saw him nearly max out his small cod quota for the fishing year, which begins and ends in the spring. So the 62-year-old says he will mostly stay home now or target lobsters, skate and monkfish. “I’ve seen really dramatic changes in my lifetime.”

Not only are oceans getting warmer worldwide, but global warming is draining the vigor from a giant ocean conveyor belt known as the Atlantic Meridional Overturning Circulation, or AMOC. The new modeling results show that a weakening of the conveyor belt will see warm tropical and cool Arctic currents both pushed further north of the gulf’s mouth.

The changes projected by NOAA’s model were published last week in the Journal of Geophysical Research: Oceans. They suggest there will be a “real transformation of this ecosystem,” said Andrew Pershing, a Gulf of Maine Research Institute scientist.

Changes projected in the Gulf of Maine as carbon dioxide levels increase in the atmosphere.
Credit: NOAA

Pershing has studied temperature changes underway in the waterway, linking them to what scientists have described as the “collapse” of the cod fishery. He was not involved with the new research.

“It’s really challenging when you think about managing the fisheries,” Pershing said. “We’re going to have to start to look forward, and not be managing for the past.”

Warming waters are expected to continue to reduce populations of cod and northern shrimp in the gulf, Pershing said, and to expand those of squid, black sea bass and hake. Lobster populations are also being affected, rising in some areas and falling in others.

The new high-resolution model, a prototype branded the NOAA GFDL CM2.6, helped researchers overcome longtime difficulties in simulating how currents interact in the northwestern Atlantic ocean. That helped the scientists understand the role of circulation changes in gulf warming rates.

Regarding the causes of rapid gulf warming, “what we’re surmising is that it’s coming down to AMOC,” said Vincent Saba, a NOAA fisheries scientist who led the new research. “It’s a very complex region.”

Saba said cod in the gulf are “highly sensitive to temperature change,” and that they “will be much more severely impacted if our projections become a reality.”

Research published last March in Nature Climate Change revealed that fresh water pouring into the sea from the melting Greenland ice sheet is slowing the AMOC to levels not experienced in more than a millennium.

Penn State meteorology professor Michael Mann, who helped produce last year’s AMOC study but wasn’t involved with the new NOAA research, said the findings of the papers “mirror” one another.

“I think it’s plausible that the Gulf of Maine will warm faster than the globe, because of the double whammy of rising ocean surface temperatures due to greenhouse warming, and the additional dynamical response of the AMOC,” Mann said.