Here’s Where Ocean Acidification Will Hit the U.S. Hardest

U.S. coastal communities better start preparing for ocean acidification now, especially if we want scallops, oysters and other shellfish to keep appearing on our dinnerplates.

That’s the message of a new study that shows that shellfisheries across the U.S. are more vulnerable to climate change’s less considered counterpart than previously thought. That vulnerability is due to more than changing ocean chemistry. Social and economic factors, local and more distant pollution and natural ocean processes could conspire to make ocean acidification a problem sooner rather than later. 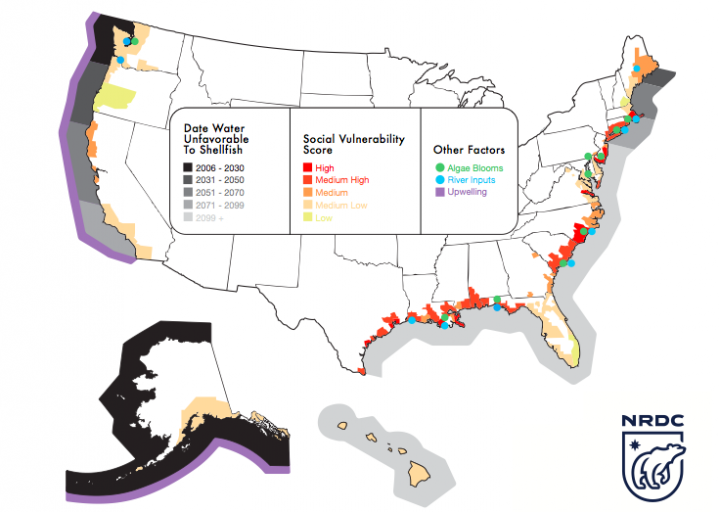 The chemical process of ocean acidification starts with the extra carbon dioxide humans are adding to the air. About 25 percent of it is sucked up by the ocean where it dissolves and contributes to making the ocean more acidic and less friendly to carbonate, a compound that shellfish and coral need to grow.

But the new study published in Nature Climate Change on Monday makes it clear that while ocean acidification may make conditions tougher on shellfish, how much coastal communities rely on those shellfish and how ready they are to deal with changes makes a big difference in how ocean acidification plays out on land. With more than $1 billion in revenue to U.S. coastal communities from mollusks, which the study focuses on, just how prepared those communities are could have huge financial ramifications.

“The conventional wisdom has been to think of vulnerability to ocean acidification only in terms of ocean chemistry. We wanted to fold in a few other dimensions, particularly socioeconomic dimensions, to fill out that picture,” Lisa Suatoni, a senior scientist for Natural Resources Defense Council who contributed to the new study, said. “Doing that, you see many more communities are vulnerable to ocean acidification than previously thought.” 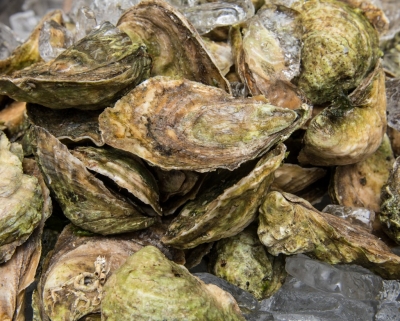 Of the 23 coastal regions in the U.S. identified by Suatoni and her colleagues, 16 of them will face ocean acidification levels unfavorable for shellfish. Overlaying social factors, levels of agricultural runoff, local pollution and upwelling, a natural ocean process that brings more corrosive deep ocean water to the surface, helps tease out regional differences in vulnerability.

In the Pacific Northwest, vulnerability is on the lower side despite high acidification rates coupled with heavy runoff and upwelling. Suatoni said that reflects the strong policies already in place because ocean acidification contributed to an oyster hatchery crisis that hit the region about 10 years ago. By 2008, harvests at one local hatchery declined by about 80 percent because acidic waters and a lack of carbonate essentially made it impossible for baby oysters to form their shells.

“They only have two days to build that shell. If they don’t build their shell, they starve,” Suatoni said.

In response to the issue, which threatened the region’s $111 million industry, scientists, state governments and hatcheries implemented an early warning system that gives hatcheries a heads up on when a wave of more acidic water is headed their way. That allows them to close intake valves or treat the water to ensure there’s enough carbonate for oysters to survive.

On the other side of country, fisheries in Massachusetts face lower acidification rates but higher vulnerability. Southern Massachusetts brings in more than $300 million in mollusks annually, accounting for the vast majority of the region’s fisheries revenue. 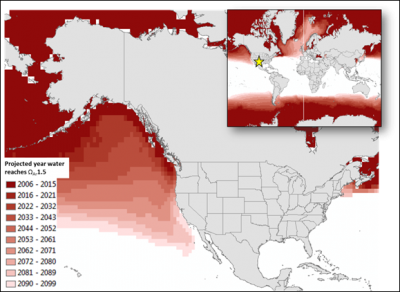 “Massachusetts and Maine are places that are just screaming for problems,” Suatoni said. “New Bedford, is the highest earning fishing port in the country. Eighty-five percent of landings are coming from one species: scallops. They’re really vulnerable.”

Even areas with low acidification rates such as the Gulf Coast are still highly vulnerable because of undiverse economies and harmful algae blooms that can exacerbate acidification’s impacts. By identifying those vulnerabilities now, New Bedford and other ports can consider what steps they need to take to shore up vulnerability now rather than waiting for a crisis to hit.

“Developing these types of studies that bring the results into a greater community context is extremely valuable to policymakers that need to make decisions for their areas,” Jeremy Mathis, director of ocean and environmental research at Pacific Marine Environmental Lab, said.

“Now is the time to start planning. We don’t want to wait until there is a disruption. These documents provide that incentive for communities to start developing adaptation strategies now that will hopefully provide for them in the future.”

You May Also Like:
Carbon Pricing Pays the Way for Cleaner Energy
Freeze Frame: Drone Captures Niagara Falls on Ice
Dry or Snowy? Winter Weather Splits the U.S.
2015 Picks Up Where 2014 Record Heat Left Off