President Obama made a prominent mention of climate change in his fifth State of the Union address on Tuesday night, as he has in his other such speeches as well as his unofficial State of the Union speech before a Joint Session of Congress in 2009. 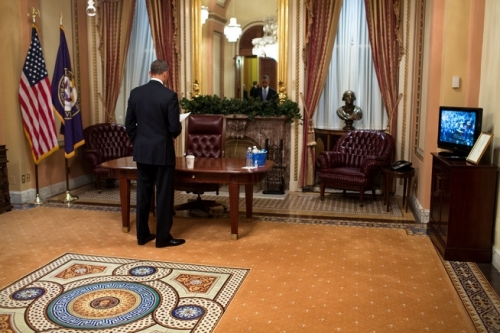 On Tuesday, Obama once again declared that manmade climate change is a reality, and noted that some of its potential impacts are already being felt across the country.

“Over the past 8 years, the United States has reduced our total carbon pollution more than any other nation on Earth,” Obama said. “But we have to act with more urgency — because a changing climate is already harming western communities struggling with drought, and coastal cities dealing with floods.”

The President then defended the EPA's moves to regulate greenhouse gas emissions from new and existing coal-fired power plants. These rules, only some of which have already been proposed, are being contested in court by utilities and powerful lobbying groups, such as the U.S. Chamber of Commerce, which contend that it would unfairly harm the coal industry and raise energy costs.

The urgency of acting on climate change, Obama said, is “why I directed my administration to work with states, utilities, and others to set new standards on the amount of carbon pollution our power plants are allowed to dump into the air.

Later in the speech, Obama said, “Climate change is a fact. And when our children’s children look us in the eye and ask if we did all we could to leave them a safer, more stable world, with new sources of energy, I want us to be able to say yes, we did.”

Early on in his presidency, Obama used the State of the Union addresses as an opportunity to urge Congress to act on climate change. “I ask this Congress to send me legislation that places a market-based cap on carbon pollution and drives the production of more renewable energy in America,” he said in 2009. But when this effort failed the following year, his State of the Union speeches shifted toward emphasizing executive actions that he can take to bypass Congress. “The differences in this chamber may be too deep right now to pass a comprehensive plan to fight climate change,” Obama said in his 2012 State of the Union.

In addition, Obama has long framed climate change within the context of energy independence, placing an emphasis on the need to take an “all of the above” approach to domestic energy development, which includes expanding domestic oil and natural gas production.

The most time the President has devoted to climate science in a State of the Union speech came in 2013, when he took on the topic of the connections between extreme weather events and manmade climate change. “Heat waves, droughts, wildfires, floods — all are now more frequent and more intense,” Obama said. We can choose to believe that Superstorm Sandy, and the most severe drought in decades, and the worst wildfires some states have ever seen were all just a freak coincidence. Or we can choose to believe in the overwhelming judgment of science — and act before it’s too late.”

Related Content
Obama Administration Takes Action on Climate Resilience
Obama: Will Act on Climate, With or Without Congress
Breaking Down Key Features of Obama's Climate Plan