EDITOR'S NOTE: This story was updated to include more details from President Obama's climate speech at Georgetown University on Tuesday.

In a landmark day for U.S. climate science and policy, the Obama administration announceed on Tuesday a broad range of policies aimed at addressing global warming, including for the first time directing the Environmental Protection Agency to limit emissions of manmade greenhouse gases from both existing and proposed coal-fired power plants.

The president announced the “Climate Action Plan” during a speech at Georgetown University on a hot and muggy afternoon — his first address devoted solely to climate change. The setting fit the topic as the heat repeatedly caused the President to wipe his brow as he gave his 47-minute address. The speech followed several prominent speeches in which he mentioned the need to address the issue, most recently in Berlin last week.

The proposals, none of which require congressional approval, address everything from how federal agencies should take climate change risks into account when funding construction projects, to the need to slash emissions of global warming gases in addition to carbon dioxide (CO2). They amount to a sweeping climate plan, which includes measures to help the country adapt to near-term challenges, including more frequent and severe weather events, and the growing vulnerability of coastal locations to sea level rise and storm surge.

The President cited recent extreme weather events as a key reason for action, saying: “Droughts and fires and floods, they go back to ancient times. But we also know that in a world that’s warmer than it used to be, all weather events are affected by a warming planet. The fact that sea level in New York, in New York Harbor, are now a foot higher than a century ago — that didn’t cause Hurricane Sandy, but it certainly contributed to the destruction that left large parts of our mightiest city dark and underwater.”

The centerpiece of the administration’s proposal is the president’s request for the EPA to begin the rulemaking process for limiting greenhouse gas emissions from more than 1,000 existing coal-fired power plants. The EPA is already in the process of enacting rules governing emissions from new coal-fired power plants. In 2007, the Supreme Court paved the way for the EPA to regulate carbon dioxide, the most important long-lived greenhouse gas, under the Clean Air Act.

The new EPA proposal is likely to face court challenges from industry, since it will impose additional costs on electric utilities. And the process of devising, finalizing, and defending the rules in court may ultimately last well beyond the rest of Obama’s second term.

“We know that we have to get to work quickly in order to not only propose, but also finalize the rules,” said a senior White House official during a conference call with reporters on Monday.

“Climate change is no longer a distant threat,” the official said, noting that 2012 was the hottest year on record in the continental U.S., when one-third of all Americans experienced 10 days or more of 100-degree heat. The White House official also cited rising food prices due to drought, the fact that the 12 hottest years on record globally have all come in the past 15 years, and the growth in asthma cases related to air pollution as examples of why action is needed.

“In my State of the Union address, I urged Congress to come up with a bipartisan, market-based solution to climate change, like the one that Republican and Democratic senators worked on together a few years ago.  And I still want to see that happen,” Obama said. “But this is a challenge that does not pause for partisan gridlock.”

The President also had harsh words for climate skeptics who doubt the reality and severity of climate change. “Nobody has a monopoly on what is a very hard problem, but I don’t have much patience for anyone who denies that this challenge is real,” he said.

“We don’t have time for a meeting of the Flat Earth Society. Sticking your head in the sand might make you feel safer, but it’s not going to protect you from the coming storm.”

No plan to address the U.S. contribution to global warming could be effective without addressing emissions from the power sector. About 87 percent of all manmade emissions of greenhouse gases in the U.S. are energy-related, according to a White House report sent to Congress in March, and existing coal power plants are responsible for 34 percent of annual energy-related U.S. greenhouse gas emissions.

The proposed measures would put the U.S. on course to meet its near-term emissions reduction targets set in the Copenhagen Climate Accord in 2009, in which President Obama pledged to reduce its greenhouse gas emissions by 17 percent below 2005 levels by 2020.

The president’s speech on Tuesday came in the midst of a transformation in the domestic energy industry, with a doubling in the use of wind, solar, and geothermal energy during the president’s first term, and the rise of natural gas at the expense of dirtier coal-fired power plants. The Obama administration proposed to once again double domestic renewable energy production, this time by 2020, including by siting renewable energy infrastructure, such as wind turbines and solar panels, on public lands and buildings.

During the past five years, energy-related greenhouse gas emissions have fallen, allowing for some progress to be made toward meeting the Copenhagen Accord target. The White House report to Congress found that the biggest reason for the decline in energy-related emissions was the economic downturn that began in 2007, and that as the economy gains steam, energy-related emissions will increase again unless other policies are put in place to limit them. And in fact, the U.S. saw emissions rise more than 7 percent in the first quarter of this year as utilities started using more coal when natural gas prices increased.

The switch from coal to natural gas and renewables, as well as energy efficiency improvements, have played key roles in driving energy-related emissions lower in recent years. In 2012, net oil imports fell to their lowest level in 20 years, and the U.S. became the world’s leading natural gas producer. 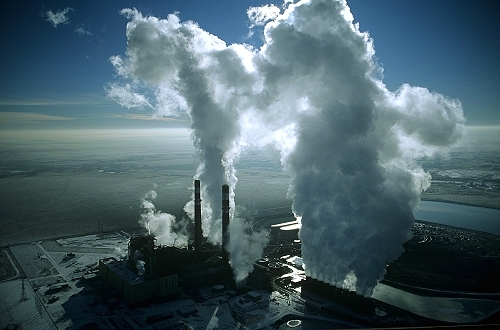 “This is a moment that’s been 20 years in the making . . . and most of the past 20 years unfortunately has not been very well spent,” said David Hawkins of the Natural Resources Defense Council (NRDC), an environmental advocacy group. The NRDC released a report earlier this year that found that limiting emissions from coal-fired power plants would cost the industry about $4 billion in compliance costs, but would provide $25 billion to $60 billion in net benefits, including through improved public health and reduced costs from long-term climate change.

In addition to taking action to reduce greenhouse gas emissions, the Obama administration also announced several measures aimed at preparing the country for the impacts of global warming.

For example, the action plan calls on federal agencies, including the Departments of Transporation and Housing and Urban Development, to ensure that any new projects built with taxpayer dollars are able to withstand increasing risks of inland floods and, at the coast, sea level rise. Parts of the coastal U.S. have already seen more than a foot of sea level rise during the past century, and some models project another 3 feet of sea level rise by 2100.

Another climate adaptation initiative includes the formation of a task force of state and local officials to work with the federal government to make it easier for communities to invest in more resilient infrastructure, and amend or eliminate federal programs that provide incentives that increase vulnerability to weather and climate extremes. This may involve reforms to federal loan programs and disaster assistance funding. Already, the EPA is planning to integrate climate change considerations into some of its clean water funds and brownfields recovery programs.

The plan also includes provisions to help farmers prepare for and withstand climate change-related disruptions, including precipitation extremes, through the support of seven “regional climate hubs” in the Agriculture Department to provide climate information and related support to farmers.

In 2012, farmers in the Great Plains and Midwest endured one of the most intense droughts since the Dust Bowl-era, only to see flooding rains come a year later.

The Obama administration's action plan includes an “open climate data initiative” that would make climate data more readily available and applicable to the public and local officials, including the development of new sea level rise mapping tools that would allow people to better visualize the potential impacts of climate change on their lives. (A report from Climate Central in early 2012 produced just such a tool, called Surging Seas.)

The White House also announced plans to build on some of its notable energy and climate-related successes, such as the most stringent motor vehicle fuel economy standards in U.S. history. Those standards require passenger vehicles to have an average performance equivalent of 54.5 miles per gallon by 2025, which the White House claims will eliminate 6 billion metric tons of carbon pollution – more than the U.S. emits in an entire year.

The administration plans to work to enact post-2018 fuel economy standards for heavy duty trucks, buses, and vans, by working with the auto industry.

In addition, the White House is working with other nations, including China, to reduce emissions of non-CO2 greenhouse gases, such as hydrofluorocarbons, or HFCs, which are used as refrigerants but are powerful global-warming agents. The impact of phasing out HFCs by 2050 would be equivalent to the elimination of two years’ worth of greenhouse gas emissions from all sources, the White House said in a fact sheet accompanying its climate plan.

At the international level, the president announced an end to U.S. government support for public financing of new coal plants overseas, except for facilities deploying technology to capture and bury greenhouse gas emissions, or in poor countries where no other economically feasible alternative exists. For decades, the U.S. and multilateral development banks, such as the World Bank, have funded the construction of large, heavily polluting coal plants in developing countries in order to expand the availability of cheap and reliable electricity, despite the costs to the climate.

The President included a prominent mention of the controversial Keystone XL Pipeline, which would transport tar sands oil from Alberta to refineries along the Gulf Coast. The project is awaiting a recommendation from the State Department, which must weigh in since the pipeline crosses an international border.

Obama said he will take greenhouse gas emissions into account in the final decision on the pipeline.

“Allowing the Keystone pipeline to be built requires a finding that doing so would be in our nation’s interest,” Obama said. “And our national interest will be served only if this project does not significantly exacerbate the problem of carbon pollution. The net effects of the pipeline’s impact on our climate will be absolutely critical to determining whether this project is allowed to go forward.”

Obama's Keystone statements were greeted with cautious optimism by anti-pipeline advocates, many of whom noted that it still leaves the White House with significant room to manuever in making a final determination.

Related Content
Campaign For Climate Resilience Spreads Across U.S.
$110 Billion Price Tag for Extreme Weather Events in 2012
Methane Leaks May Negate Climate Benefits of Natural Gas
Will Natural Gas Save Us From Climate Change
Obama: Will Act on Climate, With Or Without Congress
New Push to Limit 'Super Greenhouse' Gases