A lot of shale gas is going to stay locked under New York State, maybe as much as 9 trillion cubic feet of the stuff.

That’s because New York just became the first energy-rich state to ban the method of high-volume hydraulic fracturing, or fracking, used to extract natural gas found in underground shale formations. The ban came at about the same time that the Canadian provinces of Quebec and New Brunswick officials said they’d prevent shale gas development, too. 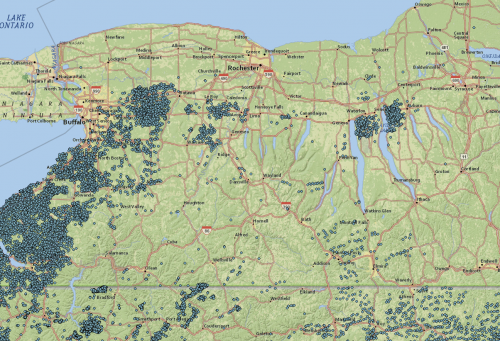 Those regions banned fracking solely for health reasons. But experts agree one of the broader ramifications of this week’s actions may be on the climate.

Those experts, however, are divided on what the implications of the ban are. Natural gas produced from shale is likely to help reduce U.S. reliance on coal-fired power plants for electricity generation even as research shows that relying on natural gas to wean the country away from coal releases large amounts of methane into the atmosphere and could be an impediment to renewables development.

“The most obvious climate change question is: Will abundant natural gas and cheap natural gas lead to the phase out of coal-fired power plants or slow the adoption of renewable electricity, and that dynamic, more than anything else, will determine the greenhouse gas consequences,” said Rob Jackson, professor of environmental and earth system science at Stanford University, whose previous research has focused on methane emissions from natural gas development.

“The decision to leave the fossil fuel in the ground clearly affects cumulative emissions and long-term climate change,” Jackson said.

In one camp are those who say banning high-volume fracking could slow America’s draw-down of coal-fired power plants to reduce CO2 emissions. Without a cheap, abundant alternative energy source, coal will remain America’s biggest fuel for power plants, they say. In the other camp are those who say the public health and climate risks of extracting shale gas are too great because leaking methane drives climate change, and scientists don’t know enough about how fracking affects drinking water, air quality and public health.

Shale gas development in Pennsylvania and elsewhere has been found to leak large amounts of methane, one of the biggest climate risks associated with fracking and one that New York won’t have to contend with as much with the ban in place.

Terry Engelder, geosciences professor at Penn State University, is among those in the first camp. Engelder says New York’s natural gas might best be used to shut down coal-fired power plants in Pennsylvania rather than stay in the ground.

“There are many who think that taking out the coal-fired power plants with a combination of solar, wind, nuclear and gas-fired turbines (as a back-up for wind and solar) may be the most direct first step in the process of arresting global warming,” he said, calling methane a “bridge fuel” as long as leaks can be minimized.

In the other camp are scientists like Anthony Ingraffea, a Cornell University civil and environmental engineering professor who says the climate and other risks associated with shale gas development are too great for it to be a bridge fuel.

Much of western New York sits atop the natural gas-rich Marcellus shale, the same formation that has made neighboring Pennsylvania one of the country’s largest natural gas producers because of high-volume hydraulic fracturing operations. The Marcellus shale, stretching from Tennessee to New York, is estimated to contain about 84 trillion cubic feet of recoverable shale gas, up to 9 trillion of which is in the Empire State.

Though New York’s share of Marcellus shale gas is relatively small compared to surrounding states, extracting and burning it would release a significant amount of greenhouse gas emissions, Ingraffea said.

Experts disagree about the long-term impact of New York’s ban on high-volume fracking, but whatever the effect, New York’s decision could be influential both domestically and internationally.

Cohon said that while though the most significant aspect of the ban is that the state does not believe there is enough scientific information to determine how shale gas development affects human health, the decision to implement a fracking ban is too narrow. 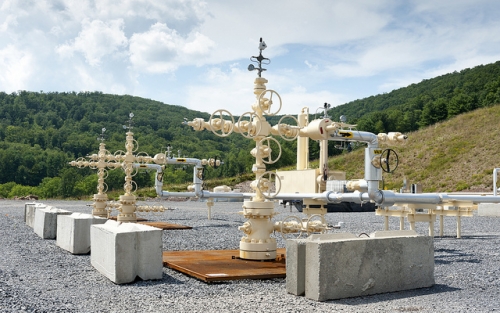 A shale gas well in Pennsylvania.
Credit: Beyond Coal and Gas Image Library/flickr

The state should have considered shale gas development in the broader context of its total costs and benefits, and the environmental impacts of energy use in New York, not just in the context of it being unpleasant to live next to a shale gas well, he said.

Jackson said the New York ban is likely to signal to other countries that they should proceed with shale gas fracking cautiously, if at all.

“Others, like Mexico and Colombia, are starting to think about rules and regulations,” Jackson said. “Those kinds of countries may slow down and a few of them may stop (fracking) the way France decided to stop.”

For the foreseeable future, it’s unlikely other U.S. shale oil and gas-producing states, such as Texas and North Dakota will follow New York’s lead.

Those states won’t stop shale oil and gas development anytime soon, but the New York ban is likely to embolden the energy industry’s critics in those states, possibly leading cities and towns to explore bans of their own, Jackson said.

New York’s ban could have an effect on scientific research, too.

The state is influential in federal research decisions, and it’s possible the ban could encourage the energy industry to fund more scientific research on fracking’s impacts, Ken Carlson, a Colorado State University civil and environmental engineering professor who studies the impacts of shale gas development, said.

Ingraffea said that now that New York is basing a policy decision on science, it legitimizes scientists who were worried their careers or their credentials would be undermined by scrutinizing oil and gas development.

“It’s a very positive result for science,” he said.