The GOES-R satellite was one of the most eagerly anticipated satellites in recent memory. The National Oceanic and Atmospheric Administration launched it in November 2016 with the promise to revolutionize weather forecasting in the U.S.

After years of construction, a harrowing rocket launch and delicate maneuvering to put it in position 22,300 miles above the earth, the most advanced satellite NOAA has ever put in orbit has sent back its first pictures. They were worth the wait. 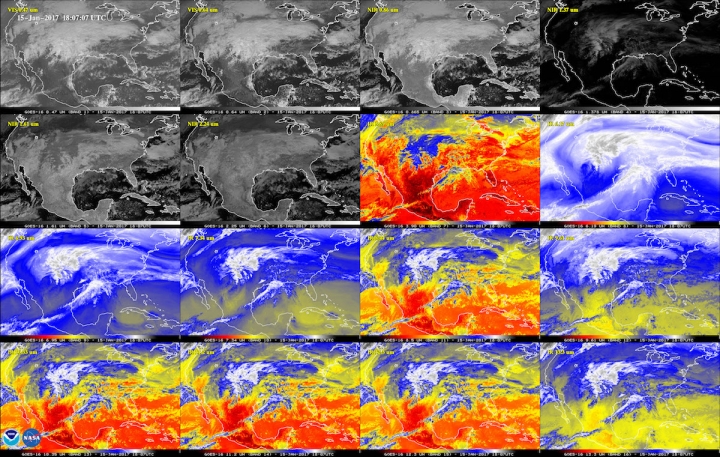 A 16-panel image shows the U.S. in the two visible, four near-infrared and 10 infrared channels aboard GOES-16. These channels help forecasters distinguish between differences in the atmosphere.
Click image to enlarge. Credit: NOAA

In a press release, NOAA said the images are the start of an age of “high-definition from the heavens.” And for scientists, the images really are heaven-sent. They provide a wealth of new information and data that could help dramatically improve weather forecasts.

One image displays the prowess of GOES-16  — the name for GOES-R now that it’s in orbit — in detecting different wavelengths of light. That will help researchers distinguish between different components of the atmosphere such as clouds and water vapor as well as particles from smoke, ice and volcanic ash.

Another image shows the moon over a cloudy earth captured on Jan. 15, underscoring the crisp and clear imagery that GOES-16 will be returning full time in November 2017. 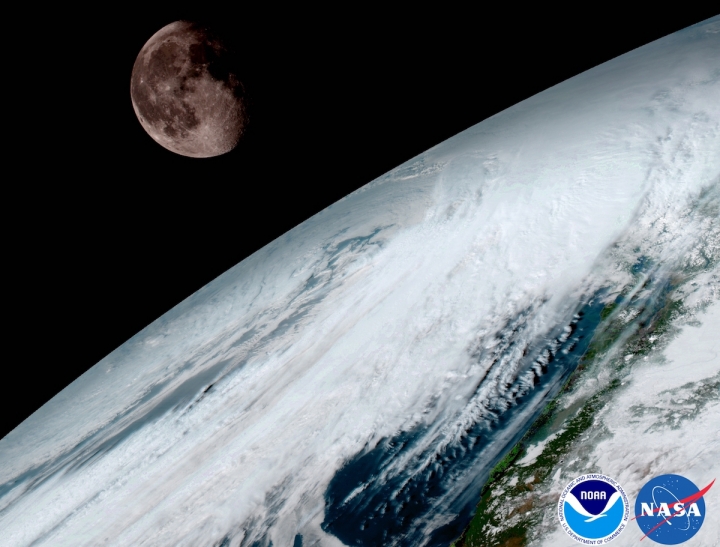 The moon over earth. GOES-16 will use the moon for calibration purposes.
Click image to enlarge. Credit: NOAA

And finally, there’s a full earth composite taken from GOES-16’s geostationary spot above the planet.

GOES-16 provides one of the most granular views of the planet. Compared to its predecessors currently in orbit, GOES-16 returns images that are four times higher resolution and are captured in a fifth of the time.

The sensors on board also return data that provide a clearer view of winds at different heights of the atmosphere. It’s the second high-resolution satellite in orbit (the other is Japan’s Himawari-8) and NOAA will put a third in orbit sometime in 2018.

The more nuanced view of the atmosphere could help scientists improve forecasts and more closely monitor extreme weather events. GOES-16 launched a month after Hurricane Matthew. If the satellite had been operational then, it would have given researchers an extra tool to track and forecast the storm, particularly in places like Haiti where weather stations are incredibly sparse.

Sunday’s deadly tornado outbreak in the Southeast is another area where GOES-16’s advanced imaging capabilities could provide real and potentially life-saving benefits.

Climate scientists will also reap benefits from GOES-16 imagery. Being able to better track how the atmosphere functions now will help them answer what happens to it in the future as the planet continues to warm.