As the weather system that spawned the deadly Moore tornado moves eastward, the main weather satellite used for observing and forecasting conditions across eastern North America and the Atlantic Ocean has gone offline. It's the second malfunction since September 2012, when a technical glitch was fixed by engineers working from the ground.

According to the National Oceanic and Atmospheric Administration (NOAA), which operates the nation’s fleet of weather satellites, the satellite, known as GOES-13, initially malfunctioned at 11:40 p.m. eastern time on Tuesday. An initial recovery procedure was unsuccessful at restoring it to operation. 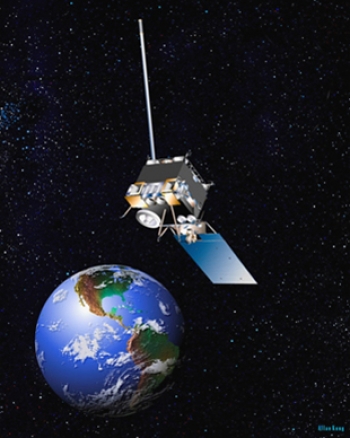 A NOAA rending of a GOES satellite.
Credit: NOAA.

According to a blog post from the University of Wisconsin’s Space Science and Engineering Center, the error centers around a mechanism that helps the satellite detects its orientation, or attitude, which is known as the “Star Tracker.” “The Star Tracker is not functioning, which means the satellite cannot find the Earth,” the blog post said.

The outage of this geostationary satellite — so named because the spacecraft stays in a fixed orbit above the equator — does not mean that forecasters have lost all of their weather imagery and data for the Atlantic Ocean and the East Coast. NOAA immediately put backup operations into place, and other satellites, including polar-orbiting satellites, can compensate for some of the lost data.

As occurred during the outage in September, NOAA first placed a satellite that covers the West Coast into “full disk scan” mode, which will allow it to take pictures of eastern areas once every half hour. NOAA is now maneuvering its backup GOES satellite into service to take over for the troubled GOES-13 as of Thursday morning.

Launched in 2006 but not put into service until 2010, GOES-13 should have several more years in service before it reaches the end of its design lifespan.

One of the biggest impacts from the brief degradation in satellite coverage could be felt in the area of computer modeling, since satellites are one of the main data sources for weather models. That could have an impact on the reliability of hurricane forecasts, in particular. Fortunately, there are no active tropical storms or hurricanes in the Atlantic, and the storm system moving from the Plains toward the East Coast is weakening.

The satellite outage, even if it only leads to a temporary interruption of routine weather data, offers another preview of what’s to come in a few years due to delays in the development of the next generation of polar-orbiting satellites. The delays mean that the polar satellite program won't have the redundancy that is present in the GOES program.

Polar-orbiting satellites continuously scan the planet from north to south, and instruments aboard these satellites are used for many applications in addition to weather forecasting, such as monitoring volcanic eruptions, gathering sea-surface temperature data, and locating emergency beacons from aviators or mariners in distress. NOAA has warned that a gap in polar satellite coverage could significantly degrade forecast accuracy, even retroactively forecasting Hurricane Sandy with and without the satellite data, to show how forecasts would have suffered.

NOAA has warned that starting in 2017 there will likely be at least a year-long gap between the newest polar orbiting satellite’s design lifetime and the scheduled launch date of its replacement.

That would mean the U.S. would be reliant on just one polar-orbiting satellite, rather than the two that have long been in service. NOAA ran up billions in cost overruns for the next generation of polar-orbiting weather satellites, and delays and congressional budget issues have put that program, known as the Joint Polar Satellite System (JPSS), years behind schedule.

“Gaps are opening in both our operational and research satellites,” J. Marshall Shepherd, director of the atmospheric sciences program at the University of Georgia a president of the American Meteorological Society, told Time.com. “If one of them goes out, it’s not like simply replacing a burned-out light bulb. These things take years to build and launch.”

When the GOES-13 satellite malfunctioned in September 2012, NOAA spokesman John Leslie downplayed the significance of the problem. “To put it into perspective, this is a technical anomaly, which is not unusual during the life of any satellite mission. NOAA continues to work with its partner, NASA, on the development and launch of the next-generation JPSS and GOES-R satellites,” he said.

NOAA has not yet responded to requests for comment on the latest technical difficulties.