NOAA Is Still Lacking an Administrator to Lead Agency

We’re 12 weeks into the Trump administration and there’s a glut of nominations President Trump has yet to put forward. Many are crucial to having a functioning government and setting the priorities for their agencies.

In the climate world, there’s perhaps no more important position to fill than the head of the National Oceanic and Atmospheric Administration. The administrator oversees a wide portfolio of climate research, weather forecasting and ocean protection and a $5.6 billion budget.

Yet the position sits vacant. It’s a major break compared to President Barack Obama, who announced that he was nominating Jane Lubchenco as his NOAA administrator a month before he was inaugurated. 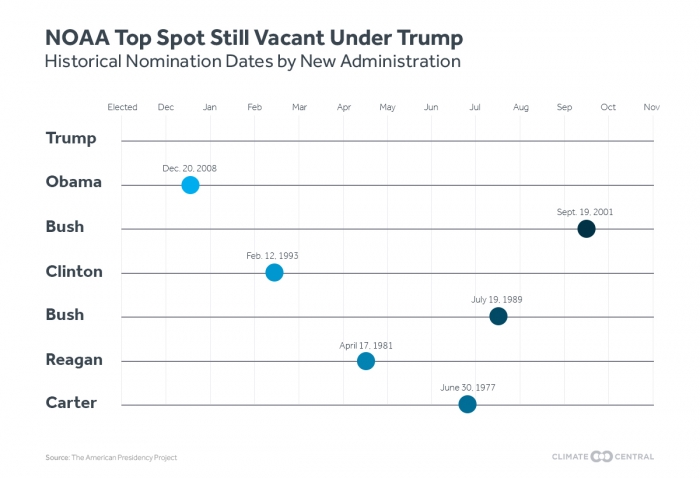 Trump has also fallen behind President Bill Clinton, who nominated James Baker to lead NOAA on Feb. 19, and he’s about to fall behind President Ronald Reagan, who submitted his nomination for John Knauss on April 17. But not every president has moved quickly to fill this role. George W. Bush took until Sept. 19 to announce his nominee.

NOAA currently has an acting administrator, Benjamin Friedman, who has kept things running. Weather alerts are still going out, the global average temperature is still being calculated and ocean data is still being crunched for El Niño forecasts. But without a permanent leader in place, the agency is essentially treading water.

“Acting officials are by nature of the position temporary and therefore aren’t able to drive long-term strategy,” David Eagles, the director of the Center for Presidential Transition at the Partnership for Public Service, said. “It is important to fill these positions with nominees as quickly as possible to accomplish policy priorities.”

At NOAA, the priorities are manifold given the role that climate, weather and the ocean play in every American’s life. The Trump administration will have no shortage of thorny issues to tackle on each of these fronts.

In weather forecasting, NOAA faces a growing gap in weather modeling compared to its European counterparts. The administration is actively working to undo climate regulations, but that doesn’t change the country’s need to prepare for the impacts. The billions of dollars in assets at risk from sea level rise are just one of the areas where NOAA has a major role to play in both monitoring changes and helping communities prepare.

Changing drought patterns across the U.S. at the start of each decade through 2095.
Credit: College of DuPage

Nominating an administrator would go a long ways toward making it clear how the Trump administration plans to address these and other challenges the U.S. faces. It will also put someone in charge of arguing for or against the 17 percent budget cut proposed in the administration’s skinny budget.

“If no administrator is nominated, the White House is signaling a fundamental lack of interest in the missions NOAA is charged with,” David Titley, who runs Penn State’s Center for Solutions to Weather and Climate Risk, said. “Safe, effective, and efficient weather prediction, ocean surveys, navigational charts and aids such as tidal predictions and fisheries are all NOAA core missions that protect every American and power our economy.”

The names that have been floated to head the agency include Scott Rayder, a senior advisor at the University Corporation for Atmospheric Research, Barry Myers, head of Accuweather, and Jonathan White, president and chief executive of the Consortium for Ocean Leadership. Each would bring a different set of skills and expertise to NOAA, making it hard to read the tea leaves for what the Trump administration is planning.

NASA, which also does high-profile climate work, is similarly operating without a head administrator and deputy administrator. Both positions require Senate confirmation.

The heads of the Environmental Protection Agency and departments of Energy and State all have leaders, but Trump has yet to put forward nominees for any of the positions that the Senate will have to confirm, save for Rick Perry’s deputy at Energy. The State Department’s climate and energy nominees are also non-existent as are a number of positions at the Department of Energy. All told, there are more than three dozen appointments dealing with climate and energy that remain vacant or staffed by acting personnel.

The two cabinet-level positions that Trump filled in the climate and energy sphere have views that fall well outside the science community. They have both denied or sidestepped the established science that humans are the main cause of climate change.

Steve Bannon, one of Trump’s chief strategists, has said that each cabinet nominee was selected to drive “deconstruction of the regulatory state.” On climate, the administration has signed a wide-ranging executive order to rollback Obama-era rules and more broadly it has failed to lay out a coherent path forward on climate and energy.

Whoever is nominated to run NOAA and fill the other host of positions will go a long way to clarifying how the administration will proceed. At the same time, not nominating anyone also speaks volumes.