An important weather satellite that went out of service on May 22 is expected to be brought back online Thursday, said the National Oceanic and Atmospheric Administration (NOAA). The satellite shut itself down after suffering from an unknown, sudden disturbance that caused it to change its orientation relative to the Earth, and engineers have worked to troubleshoot the source of the error and restart the spacecraft. 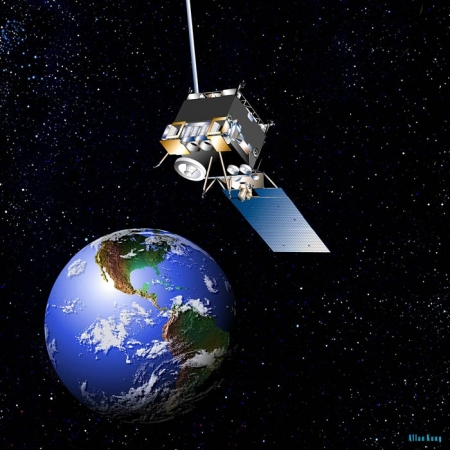 The return to service comes just as a tropical storm may be brewing in the Gulf of Mexico. The satellite, known as GOES-13, is a geostationary weather satellite. It is designed to stay in a fixed orbit at an altitude of about 22,300 miles above the equator, moving at a speed that matches the Earth’s rotation. This allows it to keep constant tabs on the weather taking place across a particular slice of the planet. In the case of GOES-13, the satellite has long been assigned to covering the “GOES East” sector, providing meteorologists with valuable imagery and data on the weather in the eastern U.S. and the North Atlantic Ocean.

Additionally, NOAA operates polar-orbiting satellites that fly 540 miles above Earth's surface, circling near the North and South poles. The data from those satellites are especially vital for making medium- and long-range weather forecasts.

According to a satellite status update posted online, NOAA said the satellite will resume operations as GOES-13 on Thursday. While rebooting the satellite, engineers are also conducting a procedure to bring one of the satellite's key instruments back online in a more reliable way, since the satellite's sounding unit was providing slightly degraded data shortly before the satellite went out last month.

The sounding unit helps provide measurements of atmospheric temperature, winds, and moisture across large areas of the eastern U.S. and Atlantic Ocean, and that data is fed into computer models used for forecasting the weather. The sounding unit on the same satellite malfunctioned in September 2012, but it was repaired using a similar procedure.

As of May 31, NOAA had not found the cause of the satellite's disruption. The agency said it was considering all possibilities, including a collision with a micrometeoroid, or space junk.

“It doesn’t appear that there was any damage or any problem with any of the instruments on board,” Capt. Debora Barr, acting deputy director of NOAA's Office of Satellite and Product Operations in Suitland, Md., told Climate Central on May 31. “We can’t find anything wrong with it,” Barr said of the satellite.

To ensure that weather forecasts don’t suffer while GOES-13 is out of service, NOAA maneuvered a backup satellite, known as GOES-14, into place to cover most of the area covered by GOES-13. The plan is for GOES-14 to return to backup status once it is clear that GOES-13 is fully functional.

The satellite outage has once again provided scientists with a preview of what’s to come during the next several years as lengthy gaps in satellite coverage become more likely.

NOAA’s policy has been to keep two GOES satellites in orbit at all times, along with one backup. However, the first satellite in the next-generation as GOES spacecraft won’t be launched until the fall of 2015. Across-the-board budget cuts to federal programs, known as the sequester, may cause the launch date of the first GOES-R satellite to slip, which could result in a period without any redundancy in deployed satellites, as the current satellites begin exceed their design lifetime.

NOAA ran up billions in cost overruns for the next generation of polar-orbiting weather satellites, and delays and congressional budget issues have put that program, known as the Joint Polar Satellite System (JPSS), years behind schedule.

The lengthy delays in NOAA’s satellite programs have led to efforts to open the weather satellite sector to additional privatization. A draft House bill would allow the government to purchase weather data from privately operated weather satellites, which would be a significant change from the current system in which the government procures the satellites from private companies, such as the aerospace giant Boeing, and then operates the spacecraft itself, freely distributing the data to the public.