2013 wasn't even close to the warmest or wettest year on record, but it was a year that split the U.S. with extremes — wet in the east and dry in the west. That's the picture the National Oceanic and Atmospheric Administration painted with its review of 2013 weather across the country, an annual report published Wednesday.

Unlike 2012, which was the hottest year on record and spawned extreme events across the country, last year was only on the slightly warmer and wetter side of history. 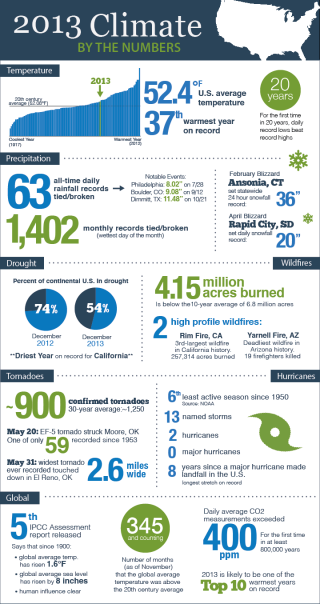 Major climate milestones in the U.S. for 2013.
Click here for a full size version.

Overall, 2013 ranks as the 37th warmest year in the record books for the continental U.S., tied with 1980. The year was also the 21st wettest for the country. But there was a sharp dividing line in terms of the haves and have nots when it comes to who got rain.

States east of the Mississippi River received a good soaking over the course of the year. The Southeast was particularly wet with Georgia having its second wettest year on record and six other states in the region having one of their top 10 wettest years. Individual cities including Asheville, N.C., Macon, Ga., and Knoxville, Tenn. each set records for their wettest year since record keeping began.

“A lot of the above normal precipitation in Southeast was associated with a persistent storm track across the U.S.,” said Jake Crouch, a climate analyst with the NOAA National Climatic Data Center. “It was not necessarily an unusual feature, it was just a persistent feature.”

Large parts of the Great Plains also had wetter than average conditions, which helped ease drought that crippled the region in 2012, causing an estimated $30 billion in damage and losses across the country. Over the course of the year, the U.S. Drought Monitor showed that the percentage of the country in drought shrank from 61.1 percent at the beginning of the year to 31 percent by the end of it.

Overall, NOAA's numbers show that during the July and again in September over a quarter of the country experienced very wet conditions, which NOAA describes as having rainfall in the 90th percentile.

Drought relief stopped west of Utah, though, and intensified across parts of Nevada, California, and Oregon. California suffered its driest year in history, recording only 7.38 inches of precipitation across the state. That’s 15.13 inches below average and beat the previous record set in 1898 by 2.42 inches. By the end of the year, 27.6 percent of the state was in severe drought or worse.

A map showing how precipitation for 2013 ranked for each state.
Credit: NOAA National Climatic Data Center

“A lot of dryness in California was due to a persistent ridge (of high pressure) over the western U.S.,” Crouch said. “Sea surface temperatures in the North Pacific were above average in 2013 and they can be related to this ridge.”

Ridges are areas of high pressure that tend to steer storms away from an area. In the case of California, the ridge of high pressure formed during the time period when California receives most of its rainfall from mid-autumn through late spring.

“Once we got into mid-spring with California having a really deficient wet season, by March or April, we knew the next few months were essentially off the table for recovery of drought,” NCDC climatologist Deke Arndt said.

The same pattern that kept California dry ended up steering a number of storm systems to Alaska and was in part why the state recorded its third wettest year in 90 years of record keeping.

Arndt said that the sharp division in precipitation extremes is indicative of what to expect in a changing climate. He said observations have borne that out so far along with fewer cold snaps and more extreme heat waves.

The other division within the country was costly extreme events. NOAA estimates that there were seven disasters in 2013 with losses totalling $1 billion dollars or more. Those events include five tornado and severe weather outbreaks, the Colorado floods, and, despite improvements, drought across the western U.S.

All seven disasters affected areas far-removed from the coast. That’s a sharp change from the past two years, when four major coastal storms caused nearly $80 billion in combined losses. 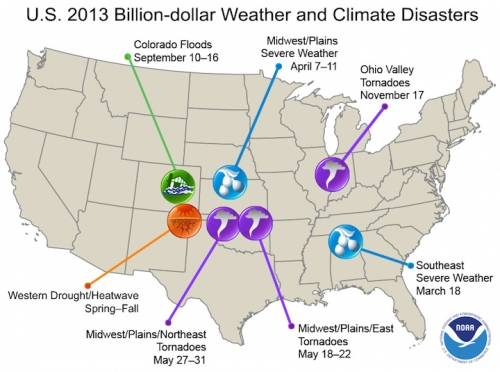 A map showing how the location of the seven weather disasters in the U.S. that caused $1 billion or more in losses in 2013.
Credit: NOAA National Climatic Data Center

Tornadoes accounted for a large portion of the damage in 2013 despite it being a relatively quiet year for the number of tornadoes formed. Arndt said that when the final numbers are tallied, there will have been around 900 tornadoes recorded in 2013, which would make this one of the quietest years for tornadoes since the late 1980s.

Despite the overall number of tornadoes being down, some of the major tornado outbreaks that did occur hit heavily-populated areas, which accounted for their large costs and loss of life. That includes two notable outbreaks in May that spawned the El Reno tornado, which at 2.6 miles across was the widest tornado ever recorded, and the Moore, Okla. tornado, which rated as EF-5, the strongest rating. A relatively rare November outbreak in the Ohio River Valley was also on the list.

Arndt stressed that the U.S. number released on Wednesday were part of a bigger climate picture.

“What happens in the United States in a given year is only a piece of a global year,” he said. “This is one year in one country.”

NOAA will release its international numbers next week.