Despite a quiet start to August, the National Oceanic and Atmospheric Administration is still forecasting a very active Atlantic hurricane season, the agency said Thursday. The updated outlook calls for a 70 percent chance of an above-average season, with 13 to 19 named storms with top winds of at least 39 mph, including 6 to 9 hurricanes, with top winds of 74 mph or higher. 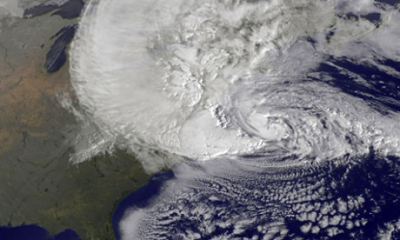 2012's Hurricane Sandy, although not technically a hurricane at landfall, became the second-costliest hurricane on record after 2005's Hurricane Katrina.
Credit: NOAA.

Of the hurricanes, NOAA projects that 3 to 5 storms could become major hurricanes of Category 3 or higher on the Saffir-Simpson scale, with winds of at least 111 mph.

The early part of the hurricane season has been an active one, with four named storms to date — Andrea, Barry, Chantal, and Dorian. Two of the four named storms formed in the deep tropical Atlantic, which is more typical of where mid-to-late season storms tend to originate, and that can be a sign of an unusually active season to come, NOAA said.

“Our confidence for an above-normal season is still high because the predicted atmospheric and oceanic conditions that are favorable for storm development have materialized,” said Gerry Bell, lead seasonal hurricane forecaster at NOAA’s Climate Prediction Center, in a press release.

The statistical peak of the Atlantic hurricane season is approaching in mid-August through October.

In recent weeks, a large region of dry and dusty air that emerged from Africa’s Sahara desert acted to inhibit tropical storm or hurricane formation throughout the tropical Atlantic, but conditions are projected to soon become more favorable for storms to form.


A NOAA computer model animation showing the recent movement of African dust across the Atlantic Basin.

The Atlantic has been in an active phase of hurricane activity since 1995, which has been at least partly attributed to natural climate variability. The conditions now in place include above-average Atlantic sea surface temperatures, and a stronger rainy season in West Africa, which can help initiate groups of thunderstorms that go on to become tropical storms and hurricanes in the Atlantic.

While the U.S. has been struck by several damaging storms in recent years — including Hurricane Sandy, which was the second-most expensive hurricane on record although it was not technically a hurricane at landfall — the country has not been struck by a major hurricane in nearly eight years, a record timespan. Major hurricanes inflict the most damage, and meteorologists and emergency management officials have expressed concern that the major hurricane gap may have lulled many coastal residents into a sense of complacency.

“The peak of the hurricane season is almost upon us and it’s important to remain prepared for hurricanes through November,” said Joe Nimmich, FEMA Associate Administrator for Response and Recovery, in a press release.