On Friday, the meteorology community was riding a major high as stunningly high-definition images came in from the nation’s newest and much-anticipated earth observation satellite. The high came crashing down that evening, though, as the first hints of significant cuts to the budget of the National Oceanic and Atmospheric Administration began to emerge.

“Any weakening of our technological, scientific, and human capabilities related to weather and climate places American lives and property at risk,” Marshall Shepherd, director of the atmospheric science program at the University of Georgia and a former president of the American Meteorological Society, said in a Forbes blog post.

The proposal “is opposite to the ‘leave it better than you found it’ philosophy. This is take the money while you can, and let someone else in the future put Humpty Dumpty (aka NOAA) together again,” David Titley, director of the Center for Solutions to Weather and Climate Risk at Penn State and a retired rear admiral in the Navy, said in an email.

The budget proposal is part of the Trump administration’s larger effort to beef up military spending by $54 billion and pay for that increase with cuts to other agencies. It has also proposed cutting the Environmental Protection Agency’s $8.2 billion budget by 25 percent.

The largest cuts in the “passback” document, part of the White House budget proposal process, were slated for the Office of Oceanic and Atmospheric Research (26 percent of current funding, or $126 million) and the satellite data division (22 percent, or $513 million), the Washington Post reported.

Several smaller programs, such as external research funding and work in coastal resilience, which provides funds for coastal communities to guard against storm surge and rising seas, would be eliminated entirely.

These proposals do not represent a final budget, as Congress ultimately decides on appropriations to agencies, but they have left many forecasters and climate scientists deeply concerned.

Individuals from across the weather and climate enterprise, from academic researchers to those who work in the insurance industry, took to Twitter on Friday night after the news broke, to express their alarm and concerns for the impacts such cuts could have. 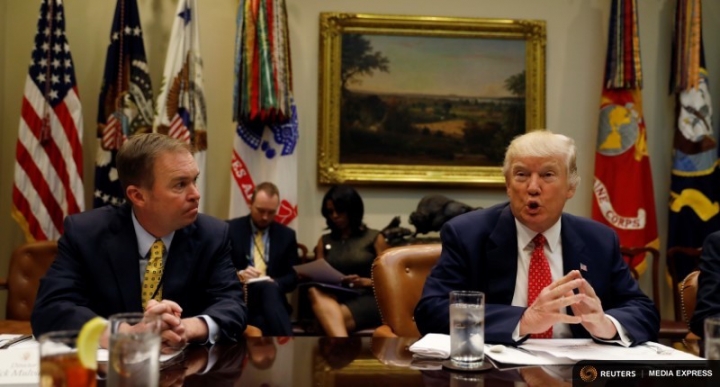 President Trump and Mick Mulvaney, director of the Office of Management and Budget, at a “strategic initiatives” meeting at the White House. Credit: Kevin Lamarque/Reuters

“I simply could not do my job without NOAA data. It is invaluable to the insurance industry for proper risk management,” Bryan Wood, an insurance industry meteorologist, tweeted. “Any reduction to NOAA's free-to-use services could lead to a rise in prices in any number of consumer-facing industries.”

“As a *private sector* meteorologist, I depend heavily on availability of data like this to do my job in *energy,*” Matt Lanza, an energy industry meteorologist, tweeted.

The OAR and satellite divisions are critical for maintaining and advancing forecasting and modeling capabilities in both the weather and climate spheres, experts said, and any cuts will curtail those capabilities well into the future.

Polar orbiting satellites, which aide in longer-term forecasting, are already facing problematic gaps, as funding shortfalls and planning delays have resulted in a delay in the launch of replacement satellites.

The Government Accountability Office included the polar satellite program and a potential coverage gap on its 2017 high risk list due to the challenges it already faces. The new budget zeroes out funding for the Polar Follow On program, which is developing the next polar satellites.

Modeling capabilities could also be impacted. For several years, some meteorologists and climate researchers have remarked that the U.S. is already behind European weather and climate modelling efforts, run by the European Centre for Medium-Range Weather Forecasts, which is investing more than $50 million in a new building to house a new, next-generation supercomputer.

“OAR is key to improving forecasting and modeling, and cuts to it will set back improvements to prediction and modeling that would have helped keep Americans safer from weather hazards. The Europeans get it, and they're doing what they can to be leaders,” Gabriel Vecchi, a climate scientist at Princeton University and a former climate modeler at NOAA’s Geophysical Fluid Dynamics Laboratory, part of the OAR, said.

OAR also houses the bulk of the communications team that runs climate.gov, the main conduit for the federal government to share information about climate research. Perhaps more importantly, the office runs grant programs for research at local universities focused on applied research that links climate information directly with state and city planners. The expertise those grantees provide is critical to helping local climate adaptation efforts.

“The Executive Office and Congress need to understand that basic human services are at stake as the pendulum swings in budget debates,” said Adam Parris, a former grant manager at OAR and current head of the Science and Resilience Institute at Jamaica Bay.

That includes people living in small towns and major metropolitan areas. Philip Orton, an oceanographer at Stevens Institute for Technology, leads a NOAA-funded program in the Northeast that focuses on the region’s major cities. He said their research “is now improving the basis on which multi-billion-dollar flood protection decisions are being made,” particularly New York’s $20 billion flood plan.

“NOAA funding sensibly enables scientists to evaluate how flood risks are growing and evaluate potential adaptation options that will save money,” he said.

Satellites, such as the new high-definition GOES-16 that meteorologists spent the week celebrating, provide most of the data that feed weather forecasts. Without sustained funding and development, new satellites won’t be ready to replace aging ones, a process Shepherd likened to needing to periodically replace the batteries in household smoke detectors.

This # GOES16 loop of the storms in Louisiana on 2/7, shows how ABI's 16 bands will help forecasters! Learn more at https://t.co/lHNz5Li6yt pic.twitter.com/kVGsf46iHi

Satellites help contribute to a weather forecast that provides an estimated $109 benefit to every household in the U.S. (which adds up to $11.4 billion), according to a 2009 assessment. NOAA satellites and real-time weather data also provide an estimated $700 million in benefits to the private weather industry reliant on federal data.

Weather and climate data kept by NOAA has also been shown to be of significant value to the re-insurance industry, which provides insurance to insurers, providing protection from major losses sustained during tornadoes, hurricanes and other extreme weather.

The impacts of any cuts today will resonate for years to come.

“There are very few cuts here that the public is going to feel quickly,” Titley said. “The satellite cut (if not restored) impacts observations in the late 2020s.”

The same satellites that feed weather models also inform climate research, because sustained, long-term observations of the planet’s atmosphere, oceans and other systems are crucial to capturing trends and to understanding any changes that are occurring.

“This data is vital for understanding how our weather and climate are changing,” Shepherd wrote.

And “any observations you don’t make, you can’t go back and make that again,” Vecchi said in an interview at his office last week before the cuts were announced. This is a problem climate scientists deal with now, since satellite observations only began in the 1970s.

Some saw the cuts to the research division in particular as retaliation for the climate research they do. For example, at its first hearing of the new Congress, the House Science Committee chairman, Lamar Smith (R-Texas), criticized a paper conducted by NOAA scientists that found there had been no “hiatus” in global warming, accusing the authors of malfeasance and using science to advance a political agenda, though no wrongdoing has been shown.

“I see this as the undeclared war on climate research (and maybe climate monitoring),” Titley said.

#GOES16 loop from yesterday. I could stare at this all day. pic.twitter.com/ECltOMffDa

“Make no mistake — the proposed policies are designed to deal a body blow to climate science, and associated climate policy, that will be felt long after this administration leaves the White House,” Kim Cobb, a coral expert at Georgia Tech who receives some NOAA funding, said in an email.

What cuts will ultimately materialize will depend on the long budget negotiations between the administration and Congress, where there is likely more support for NOAA and in particular for improving weather forecasting.

Several House Republicans, including Smith, have endorsed the Weather Research and Innovation Forecasting Act of 2017, which, like other bills Titley has seen, seems to intend to add modest funding to NWS, the OAR, and satellite division (though with an emphasis on focusing on weather over climate).

“As I have been reading through the bills, I never got a sense that Congress' intent was to cut these components of NOAA by 5-25 percent,” he said. “The next few weeks will be very interesting to see which coalitions can be put together and how many Republicans would join such a coalition. I would be very surprised if the final budget has these type of cuts, but NOAA could easily be cut 10 percent-plus in the final budget.”

For his part, Vecchi said, “I hope that reason prevails in DC and the nation's leadership in prediction and developing environmental understanding isn't sold off.”

You May Also Like:
EPA Withdraws Request for Methane Data
Trump Wants to ‘Zero Out’ EPA Programs
The Vast Majority of the U.S. Had a Crazy Warm Winter
European Climate Action Faces Crucial Moment