No Drought Relief in Sight For Desiccated West

For anyone living east of the Mississippi River, where major tornado outbreaks, torrential rainfall and flooding have been the headlines of the past week, it’s hard to imagine that 40 percent of the U.S. is experiencing some level of abnormally dry conditions, many of them extreme.

Though the overall spread of dry conditions across the U.S. has diminished slightly over recent weeks, and about 15 percent over the past year, the drought hotspots in the West remain desiccated. 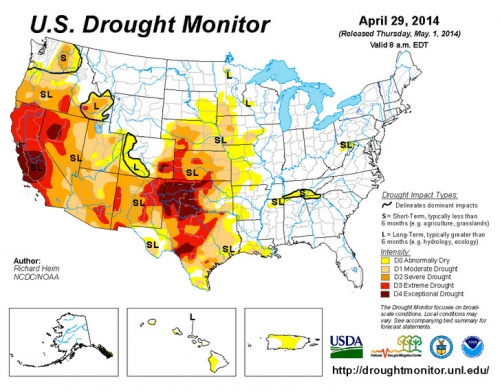 The driest places today are the places that have been dry for 2 or 3 years or longer: California, northwest Nevada and the southern Great Plains of the Texas and Oklahoma panhandles, northeast New Mexico and along the Colorado-Kansas border.

In other words, drought is bringing the dust back to the Dust Bowl territory of the 1930s.

For those places, dealing with the threat of water scarcity, the specter of severe wildfires, and farmlands that are struggling to produce crops has become a way of life.

About 75 percent of Texas is so drought stricken that the U.S. Dept. of Agriculture declared 240 of the state’s 252 counties a drought disaster area last month. The worst of it is in the northern third of the state, where Dallas is experiencing its third driest year on record so far and dust storms have been sweeping across the Panhandle.

Farther north in eastern Colorado’s Arkansas River Valley, storms of tumbleweeds have been blocking roadways, irrigation canals and access to homes and schools, forcing local county officials to spend hundreds of thousands of dollars clearing the mountains of tumbleweeds from highways and overpasses.

While Pensacola, Fla., got deluged with up to 15 inches of rain in 24 hours, and drought seems as distant as the dry Lake Tahoe area ski slopes, Californians are celebrating recent rainfall that has dampened the state’s drought enough so that only three towns are close to running out of water, down from 17 just a few months ago.

The Southeast has been inundated by a steady stream of moisture from the Gulf of Mexico, but the Southwest is still dealing with effects of a winter — normally the region’s wet season — deprived of most of its moisture thanks to a persistent blocking ridge of high pressure.

California —  100 percent of it — remains under drought conditions, according to the U.S. Drought Monitor released Thursday. Lasting relief isn’t expected to come until the fall  — if it comes at all — and for now, reservoir levels remain low and wildland fire potential remains high throughout coastal California and the Sierra Nevada range.

Wildfire potential is also high in other drought-stricken areas of the West Coast through the summer, especially Northern California, central Oregon and northern Nevada.

The May 1 national wildland fire outlook for the summer season shows drought-ravaged southern New Mexico and Arizona to have a high scorch potential through the end of June when the summer monsoon rains are expected to kick in and improve wildfire conditions there. 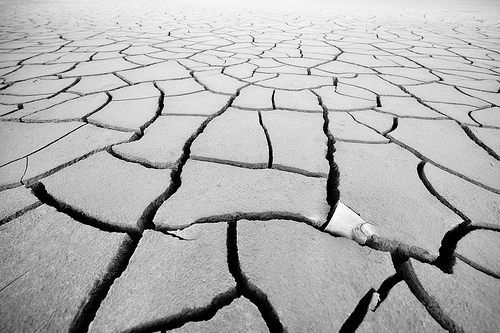 A University of Utah study published in April shows that while the number of large wildfires is increasing across the West, there isn’t always a direct connection between drought and wildfires because forest management and other factors play a role in how and when wildfires burn.

For now, the only drought relief in sight anywhere in the West is in the Four Corners states, where the summer monsoons are expected to bring above-normal precipitation for Colorado, New Mexico, Arizona and Utah, according to the National Climate Prediction Center’s three-month outlook issued in late April.

Temperatures throughout the entire southern tier of the U.S. — especially in Southern California — are expected to be above normal through August, just prolonging the pain the drought has already brought to the region.

So, the drought on the West Coast is here to stay, and relief is likely to depend on the possible development of an El Niño in the Pacific. If that happens, relief could come when the snow season begins late this year.

And even if next winter is a wet one, that doesn’t necessarily mean the West’s drought disappears.

You May Also Like
Extreme Rainfall Events Like Pensacola’s On the Rise
Epic Rains Deluge Florida Panhandle & Parts of Alabama
April Becomes 1st Month With CO2 Levels Above 400 PPM
Despite Spate of Tornadoes, 2014 on Track for Low Total