Why Hasn’t A Major Hurricane Hit the U.S. in 9 Years?

Another Atlantic hurricane season has come to a close, and with it comes the continuation of a remarkable streak: The U.S. hasn’t seen a major hurricane make landfall within its borders in nine years. The last to do so was Hurricane Wilma, which hit Florida as a Category 3 hurricane on Oct. 24, 2005. 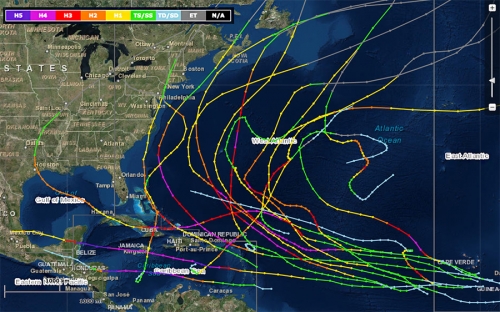 The tracks of all hurricanes that reached major hurricane status (Category 3 or higher) in the Atlantic Ocean basin from the 2006 through 2013 hurricane seasons.
Click image to enlarge. Credit: NOAA

Yes, Sandy ripped over the East Coast to the tune of $70 billion in damage in 2012, but it was technically an extratropical system by the time it slammed into New Jersey, with wind speeds equivalent to a Category 1 hurricane. Major hurricanes are those of Category 3 or higher, a ranking based only on wind speeds.

The drought of major hurricane hits is unmatched according to records stretching back to the 1950s. And its reason is a mystery.

Experts chalk it up to chance, rather than any identifiable climate pattern or the effect of global warming. After all, major hurricanes have raked Mexico and many Caribbean countries in that nine-year interval. Even Sandy was a major hurricane when it hit Cuba.

“Other people have been bearing the brunt,” Gerry Bell, the lead seasonal hurricane forecaster for the National Oceanic and Atmospheric Administration (NOAA), said. “We’ve just been fortunate.”

A hurricane’s development and path are determined by many factors, including the immediate weather patterns present when a hurricane forms. Those are responsible for at least some of the recent lull, Bell said.

“One of the factors that we’ve been seeing for about five years now is a stronger upper level trough (or low pressure area) over the U.S., and that has helped redirect them out to sea,” he said.

In contrast, the incredibly active and devastating 2005 season had a ridge, or high pressure system, over the same region. “That’s when you get these very long westward tracks,” that can impact the U.S., Bell said.

The problem is those patterns are not easily predictable. So while forecasters can deduce the number of storms expected at the beginning of a hurricane season, they are not able to predict where they will hit. 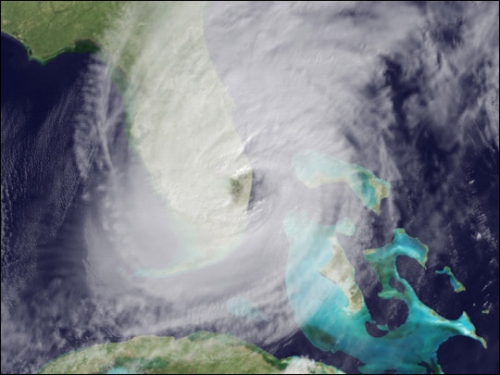 Hurricane Wilma seen by satellite as it crossed Florida in October 2005. Wilma was a Category 3 storm when it made landfall in the state and is the last major hurricane to hit the U.S. since that time.
Credit: NOAA/NASA

Why we’ve had this pattern over at least some of the past nine years, and why the lull has lasted so long isn’t a question scientists can really answer right now.

“I think it’s interesting that it’s gone on this long, but I think that it’s probably some kind of variability,” Gabriel Vecchi, a climate researcher at NOAA’s Geophysical Fluid Dynamics Laboratory in Princeton, N.J., said “It’s just the weather we happen to have gotten.”

Vecchi said that while there is very little in the way of explanation, not much points to climate change as a reason.

“I would be surprised if we found if this was due to greenhouse gases,” he said.

But even if warming had nothing to do with the recent lull in major hurricane landfalls, that doesn’t mean it might not affect hurricane tracks in the future. And climate scientists can say a lot more about the future effects of warming than about what role warming might be playing in current events.

Vecchi helped conduct a modeling study that looked at how warming might affect hurricane tracks, specifically in the Atlantic Ocean basin. What he and his colleagues found was a shift of storm tracks toward the eastern part of the basin (the same shift is seen with El Niños, he said) because of changes to particular atmospheric patterns that affect the storms, such as the Bermuda High, a semi-permanent high pressure area off the East Coast of the U.S..

Computer models aren’t the only evidence of this shift. Vecchi and his GFDL colleague Tom Knutson have also looked at the observational record and found a similar eastward shift over the past 50 years, even when changes in how hurricanes are observed and reported are taken into account.

“So there seems to be some evidence in observations and some model studies that maybe storms would shift eastward in the Atlantic as the planet warms,” Vecchi said. 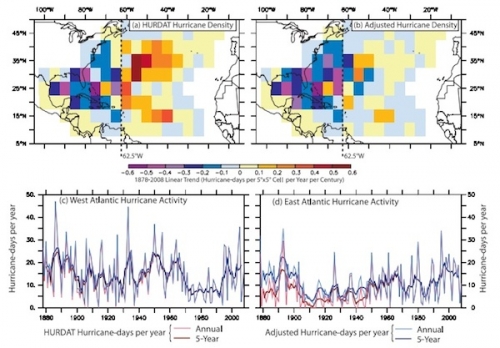 The blue and purple square in the above figure represent a decrease in hurricanes and the red and orange squares an increase. The graph below that shows the apparent decline in hurricanes in the western Atlantic and the increase in the eastern Atlantic.
Click image to enlarge. Credit: Journal of Climate, Vecchi and Knutson

Other work has come to conflicting conclusions. A study by Jennifer Francis of Rutgers University has suggested that the reduction of Arctic sea ice and the amplified warming at the North Pole could lead to more “blocking situations” like the one that sent Sandy on its westward turn into the U.S. Blocking patterns happen when the kinks in the jet stream get “stuck” for several days or weeks.

But that idea is a contentious one in climate circles. And other research, including work by Adam Sobel, a hurricane modeler at Columbia University’s Lamont-Doherty Earth Observatory, has suggested that warming will lead to the opposite situation, with fewer blocking events and more southerly hurricane tracks.

Even if the research were conclusive, however, it provides little guidance over the short term. Climate trends happen over long time frames, and are not terribly useful in figuring out if the hurricane-less streak will end next year or in the next decade. And they don’t mean the U.S. is safe from hurricane strikes now.

Vecchi said he and his friends were recently marveling at how just 10 years ago they were wondering if devastating impacts like those from Katrina and Rita were going to be the new normal. And then the streak began. The lesson? “Let’s not be so short-sighted,” Vecchi said.

You May Also Like:
Warm Water Invasion Is Fueling Striking Antarctic Ice Melt
WMO Warns Lima Delegates 2014 May Be Hottest Year
How Winters Are Changing Throughout the U.S.
Deadly Heat in Europe 10x More Likely Than Decade Ago
NOAA: Climate Change Did Not Cause Calif. Drought