Researchers have found a “mega canyon” in Greenland tucked under a mile and a half of ice that could rival the size and depth of Arizona’s Grand Canyon. While the discovery won’t become a major tourist attraction, it does provide insight into how meltwater courses its way underneath the world’s second-largest ice sheet, and how that might affect ice shelves and glaciers at its periphery. Melting ice from Greenland and Antarctica is now the dominant contributor to global sea level rise, which is expected to accelerate in coming decades.

The bedrock that Greenland’s ice sheet sits on has generally been thought to be flat. However, the new discovery, laid out in the latest issue of the journal Science, shows it may be far more complex than previously thought. “There was a hint something was there but this gives us rich imagery,” said Robin Bell, who heads the polar geophysics group at Columbia's Lamont-Doherty Earth Observatory, and was not associated with the study. 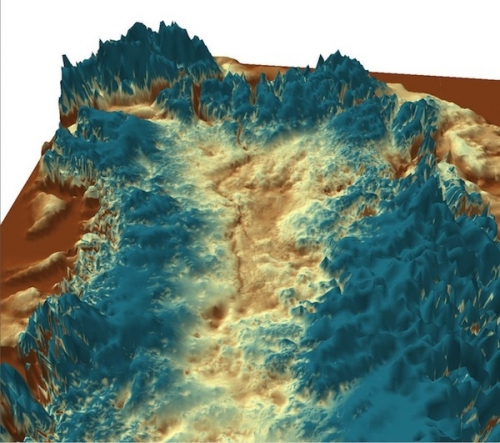 A three dimensional view of the subglacial canyon looking northeast. Researchers used NASA IceBridge data to visualize the canyon buried under a mile and a half of ice.
Credit: Jonathan Bamber/Bristol University.

Using data from NASA’s Operation IceBridge, which uses a special type of radar to peer underneath the ice's surface, the new research found a canyon that stretches for at least 465 miles from Greenland’s interior to its northwest coast. Parts of the canyon are a half mile deep and over 6 miles wide. In comparison, the Grand Canyon is 277 miles long and at its deepest point is over a mile deep and 18 miles wide.

The researchers who found it have dubbed it a “paleofluvial megacanyon,” indicating that it was formed by a river well before Greenland’s ice sheet covered it up some 3.5 million years ago.

But the canyon is more than just an awe-inspiring discovery. According to Jonathan Bamber, professor of physical geography at Bristol University, U.K., the canyon effectively funnels water from Greenland’s interior to the ocean. He stressed that the melting processes under the ice have little connection with climate change.

However, as it nears the periphery, that water can affect the periphery of the ice sheet, particularly the shelves that stretch out into the ocean. There, ice has been slipping into the ocean and melting faster in recent decades.

One dramatic example is the Petermann ice shelf, which sits near the mouth of the canyon. The ice shelf made headlines in 2010 when it shed an iceberg four times the size of Manhattan and again in 2012 when it shed another iceberg half that size.

In 2008, researchers found channels in the bottom of the Petermann ice shelf, which weakened the ice and turned out to be harbingers of the events to come. Their findings suggested that warmer ocean water caused the channels. However, the new study suggests the mega canyon may be playing a role here as well.

“We argue that an important contribution to these undershelf channels is that there’s a large amount of subglacial channels,” Bamber said.

Bell likened the process to beating eggs, where the water flowing down the canyon acts as a “whisk,” mixing up warmer ocean water under the ice shelf and deepening the cavities more rapidly.

Increased ice melt from this, as well as other surface melting due to increasing air temperatures could make Greenland a major contributor to sea level rise by the end of the 21st century. The melting of Greenland’s glaciers has also added a large boost of freshwater to the North Atlantic which could alter ocean currents and the ocean’s ability to take up carbon dioxide.