New York City Mayor Michael Bloomberg announced a far-reaching $19.5 billion plan on Tuesday to boost the city’s capacity to withstand future extreme weather events, including events comparable to Hurricane Sandy, or worse. The proposal calls for everything from constructing “adaptable floodwalls,” storm-surge barriers and dune systems, to revising building codes throughout the city. 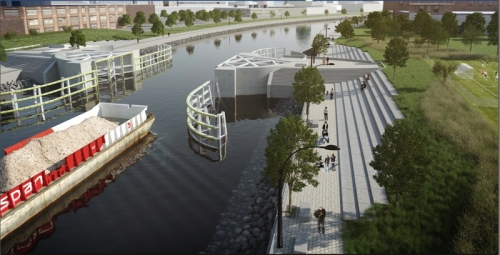 Underlying the portfolio of measures, which amount to the most comprehensive climate resilience program of any city worldwide, are a recognition that climate change is increasing the risks of damaging storm-surge events in New York by rising sea levels, and that climate change is also likely to worsen heat waves, heavy precipitation events, and other extremes.

The plan, which was outlined in a 430-page report, contains more than 250 recommendations, many of which Bloomberg said will be implemented immediately. Bloomberg made the announcement at the Brooklyn Navy Yard, which was heavily damaged during the storm, and reminded his audience that his administration only has 203 days left in office.

The plan itself, known as the Special Initiative for Rebuilding and Resiliency, is the result of a six-month process that involved consultations with state and federal agencies, community organizations, citizens and the New York City Panel on Climate Change. That panel released its updated climate projections for the city on Monday.

The new data from the climate science panel shows that sea levels could rise at a faster rate than was thought just four years ago, with up to 11 inches of sea level rise by the 2020s, and an upper-level estimate of more than 2.5 feet of sea level rise by the 2050s. The climate science panel also found that the city could have three times as many days at or above 90°F by the 2050s. Heat is the No. 1 weather-related killer in the U.S., according to the National Weather Service.

The city’s proposals, if they are all enacted, would cost upwards of $19.5 billion. Hurricane Sandy alone caused an estimated $19 billion in damage and economic losses to the city, according to City Hall.

Bloomberg said the investments are necessary to prevent increasingly expensive and damaging storms, noting that a Sandy-like storm could cost $90 billion by mid-century as sea levels rise in response to melting glaciers and warming seas. Sea level rise exacerbates storm-surge flooding by giving storms a higher launching pad for the surge and waves to ride on top of. The storm surge from Hurricane Sandy at The Battery in Lower Manhattan was the highest ever recorded at that location.

To pay for the initiative, Bloomberg said $15 billion has already been provided through previously allocated city capital spending and federal disaster relief measures. That leaves a gap of $4.5 billion, which the mayor said he intends to seek from the federal government.  “We'll press the Federal government to cover as much of the remaining costs as possible,” he said.

Newly released flood maps from the Federal Emergency Management Agency have put hundreds of thousands more New Yorkers in the 100-year floodplain compared to the maps that were in effect when Hurricane Sandy struck. “We expect that by mid-century up to one-quarter of all of New York City's land area, where 800,000 residents live today, will be in the floodplain. If we do nothing, more than 40 miles of our waterfront could see flooding on a regular basis, just during normal high tide,” Bloomberg said. 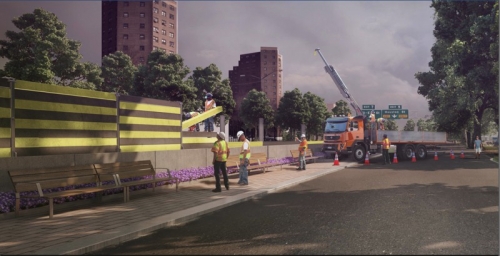 “We can do nothing and expose ourselves to an increasing frequency of Sandy-like storms that do more and more damage, or we can abandon the waterfront. Or, we can make the investments necessary to build a stronger, more resilient New York — investments that will pay for themselves many times over in the years to come,” Bloomberg said.

“I strongly believe we have to prepare for what the scientists say is a likely scenario. Whether you believe climate change is real or not is beside the point — we can't run the risk.”

On Staten Island, which suffered the highest death toll (19 killed) of the city’s five boroughs, the city plans to build 15- to 20-foot tall levees, floodwalls, and other protective devices along the island’s eastern shore. Those would provide more protection for areas such as Midland Beach, near where many of the deaths occurred.

The city’s plans call for integrated flood protection systems that would prevent similar surge-related flooding during storms while allowing access to the waterfront during calmer weather. Such systems function much like building blocks, with some permanent infrastructure installed and other temporary measures that could be added before a storm strikes. The report called for these systems to be put in place in parts of the Bronx and on the lower east side of Manhattan, where Hurricane Sandy sent the East River over its banks, forcing the hasty evacuation of two major hospitals.

Other coastal barriers that would be constructed under the plan include dune systems in Staten Island and the Rockaway Peninsula, which was another area that was dealt an especially severe blow by Sandy.

The proposal also called for a number of studies by the city and the Army Corps of Engineers, including a study of the construction of a large commercial and real estate development that would be built on top of a levee along the East River shoreline, tentatively named “Seaport City.” It would be modeled after Battery Park City, a recent development on Manhattan’s southwestern edge, which did not flood because it was built on elevated land.

No harbor-wide surge barrier, and no retreat

The plan does not call for studying or constructing a storm-surge barrier at the entrance to New York Harbor, which has been proposed by a number of researchers and engineers as a way to ensure adequate flood protection, but would cost several billion dollars. Bloomberg said it was not under consideration.

“Even though a giant barrier across our entire harbor is not practical, or affordable, smaller surge barriers are feasible — and they could have prevented a lot of the flooding we saw during Sandy,” Bloomberg said.

The mayor also rejected outright the notion that some of the most vulnerable neighborhoods would need to be ceded to the rising sea. That stance puts him in opposition to New York Governor Andrew Cuomo (D), who has established a state-run buyback program for willing homeowners to sell their damaged property in some of the state’s hardest hit and most vulnerable neighborhoods, rather than rebuilding. 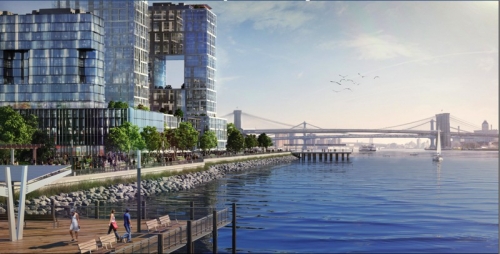 “To illustrate the futility of retreat, consider that within FEMA's new 100-year flood maps there are more than 500 million square feet of New York City buildings — equivalent to the entire city of Minneapolis. These communities are home to almost 400,000 people and more than 270,000 jobs,” Bloomberg said.

“They are not going anywhere, and we cannot and will not abandon them. It's up to us to make these communities stronger and safer. And that goes for all communities that could be impacted by a storm, not just those hit hard by Sandy.”

Some scientists said the mayor may be making a mistake by avoiding open discussions of retreat, and that he may want to reconsider his opposition to the harbor entrance surge barrier, as well.

Radley Horton, a climate researcher at Columbia University and a member of the city climate panel’s technical team, said that while New York is taking ambitious steps to cope with climate challenge, some parts of the city may prove too difficult to defend in the long run against rising seas and potentially stronger storms.

“There’s no avoiding the fact that retreat, in select locations at least, is increasingly going to be part of the discussion,” Horton said.

Malcolm Bowman, a professor of physical oceanography at SUNY Stony Brook, has long been an advocate of the harbor surge barrier. In an interview, he said the city should request that the Army Corps of Engineers study the idea, and he took issue with Bloomberg’s stance. “I think he’s wrong,” Bowman said. “I don’t know why he has that view, because he has an engineering background.

“The engineering is not rocket science. It’s well-established in Europe,” Bowman said, citing the Netherlands and Russia as examples of countries that have successfully implemented such large-scale barriers. In the U.S., smaller-scale harbor barriers have been constructed in Stamford, Conn., Providence, R.I., and New Bedford, Mass.

New York's plan is more than just barriers and levees

The city’s climate resilience plan goes far beyond dealing with the thorny questions of how to bolster coastal defenses. It also includes a $1.2 billion loan or grant program to help building owners to complete flood resiliency projects, including elevating critical building equipment. The city has previously announced the spending of a federally provided $530 million to rebuild and retrofit properties damaged by Hurricane Sandy.

The city is also proposing to develop a system that would allow homeowners to undertake flood mitigation measures in order to qualify for reduced flood insurance premiums. Under current federal guidelines, flood insurance premiums can only be reduced if buildings are elevated, which is not feasible in most cases in New York City.

Another focus of the plan concerns the privately owned utilities that serve the city. During Hurricane Sandy, a swath of Manhattan lost power when a Con Edison substation was swamped with floodwaters, and the new proposal calls for utility companies to ensure they are preparing for climate change-related impacts. According to a fact sheet accompanying the proposal, 53 percent of the city’s power plants are currently in the 100-year floodplain. By the 2050s, however, that would rise to 97 percent.

The plan also calls for the establishment of storm resiliency requirements for telecommunications companies.