A new study for the first time found links between the rapid loss of snow and sea ice cover in the Arctic and a recent spate of exceptional extreme heat events in North America, Europe, and Asia. The study adds to the evidence showing that the free-fall in summer sea ice extent and even sharper decline in spring snow cover in the Northern Hemisphere is reverberating throughout the atmosphere, making extreme events more likely to occur. 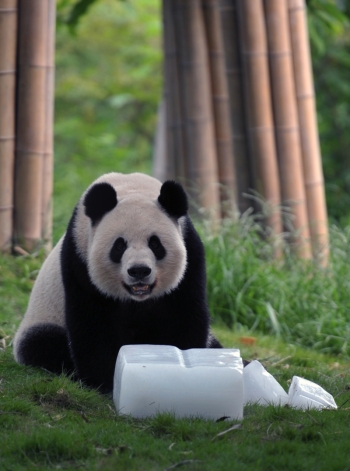 A giant panda was playing with ice cubes in Chengdu, China to cool off from the summer heat in August 2011.
Credit: Zhongjun Liu

While the study adds to the body of evidence pointing to the outsized role the Arctic is playing in shaping weather patterns, it won't end the debate within the scientific community over whether and how what is happening in the Far North could be having such far-reaching impacts.

There is virtually no controversy among climate scientists and meteorologists that massive changes have occurred in the Arctic environment during the past three decades, and that those changes are largely due to manmade greenhouse gas emissions.

Since the 1980s, Arctic sea ice extent has dropped at a rate of about 8 percent per decade during September, which is when the sea ice cover reaches its annual minimum. A record minimum was set in 2012. For a size comparison, consider that the area of summer sea ice lost since the 1980s would cover about 40 percent of the continental U.S., the study said.

Spring snow cover extent loss during June has dropped even more precipitously than sea ice cover, the study found, at a rate of about 18 percent per decade since 1979.

The reasons why the Arctic is warming so quickly — a phenomenon known as Arctic amplification — has to do with factors that are unique to the Arctic environment, involving feedbacks between sea ice, snow, water vapor and clouds. As the area warms in response to manmade greenhouse gases, melting ice and snow allow exposed land and water to absorb more of the Sun’s heat, which melts more ice and snow, and so on. A relatively small amount of initial warming can be greatly magnified in the Far North.

It is also widely agreed that the world has seen a spate of extreme heat events in recent years, such as the 2011 Texas heat wave and drought and the deadly 2010 heat wave in Russia, and that global warming made some of these events more likely to occur and more severe.

But scientific consensus breaks down when it comes to the issue of whether Arctic warming is altering weather patterns in the northern midlatitudes, stacking the deck in favor of extreme weather events.

On one side of the issue are some meteorologists and climate scientists who in their studies have found correlations between the vanishing Arctic sea ice and snow cover (collectively known as the cryosphere) and weather patterns that can lead to extreme weather events.

On the other side are other climate scientists and meteorologists who, while convinced that manmade climate change is having profound impacts on the planet, don’t yet see clear physical science evidence showing that Arctic warming is changing the already chaotic nature of weather patterns, and leading to extreme weather events.

James Overland, a researcher at the National Oceanic and Atmospheric Administration (NOAA), said the split in the scientific community is an unusual one.

“The skeptics (of the link between Arctic warming and extreme weather events) actually tend to be some of the real top midlatitude dynamics climate scientists,” Overland said in an interview.  “They’re looking at the chaos of the long-wave atmospheric pattern and it’s really hard to see why modest additional forcing in the Arctic can overwhelm all the energy that’s in that chaotic pattern.”

It’s all in the jet stream

The case for a connection between Arctic warming and summertime extreme weather events rests on the Arctic’s crucial role as a pacesetter and shapemaker of the jet stream, the powerful ribbon of upper level winds that steer weather systems from west to east across the Northern Hemisphere.

Because the temperature contrast between the frigid Arctic and the milder mid-latitudes is what drives the powerful jet stream winds that guide weather systems, what happens in the Arctic is bound to have some sort of influence on the world’s weather.

The new study, along with other previously published research, showed that the decline in sea ice and snow cover has slowed the west-to-easterly component of the jet stream, thereby enhancing the north-to-south waviness of the jet, which leads to the creation of more stagnant or “blocked” weather patterns. In addition, the new study found an association between sea ice and snow cover decline and a northward shift in the jet stream, which allows more warm air to move into the U.S. and Europe during the summer.

Paradoxically, other studies, including work by the same team of researchers, has shown that Arctic warming can actually enhance cold weather extremes in the U.S. and Europe during the winter.

Jennifer Francis, a meteorologist at Rutgers University, co-author of the new study, and the most prominent proponent of the hypothesis that Arctic warming is leading to more extreme weather events, told Climate Central that this study adds further evidence to the growing body of research supporting her team’s conclusions.

“While an observational study cannot pin down the mechanistic cause of the response, our results show a strong relationship between ice and snow losses during summer with heat waves in mid-latitude continents where billions of people are affected,” Francis said in an email conversation. 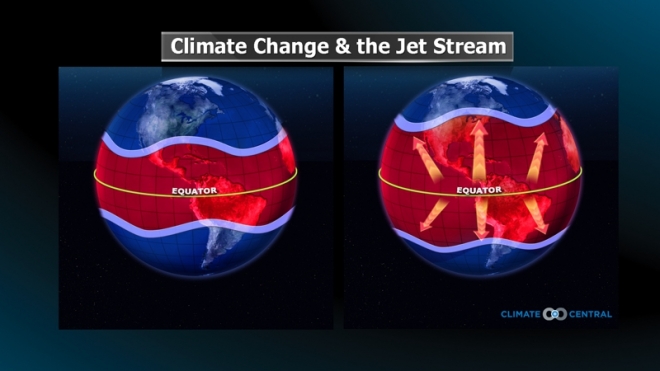 Observations show a northward shift in the jet stream is related to the smaller temperature difference between the equator and the poles.
Click image to enlarge. Credit: Climate Central.

But the lack of statistically significant results and, more important, the absence of evidence pointing to a smoking gun — a physical mechanism in the climate system that ties Arctic changes to extreme events — has left many top climate researchers unconvinced that rapid Arctic warming is a major player in causing extreme weather events outside of the Arctic itself.

The result, some of these scientists told Climate Central, is a series of hypotheses that have not yet been fully tested.

“I would have more confidence in the linkage being ‘real’ if there was a well-understood and proven mechanism to support the correlations,” James Screen, a climate researcher at the University of Exeter in the U.K., said in an email. “The arguments presented are plausible, but in my opinion the evidence presented is far from conclusive (to put it mildly).”

Kevin Trenberth, a senior scientist at the National Center for Atmospheric Research in Boulder, Colo., said the new study and others like it have failed to show statistically significant results. Additionally, he said they lack the physical evidence of what are known as “dynamical links,” — physical ties within elements of the Earth’s climate system, such as the upper oceans and lower atmosphere — between Arctic warming and extreme events.

“There is no plausible physical mechanism or analysis of how the atmosphere is forced to behave in this manner,” Trenberth said in an email.

Further adding to the divide within the climate science community is the fact that many of the climate models that Trenberth and others often use do not show the sorts of changes in the jet stream that the new study and others like it have pointed to, including the more frequently stagnated or “blocked” weather patterns that Francis cited. In fact, many of the newest generation of climate models show that atmospheric blocking will become less common in the North Atlantic than it is now. 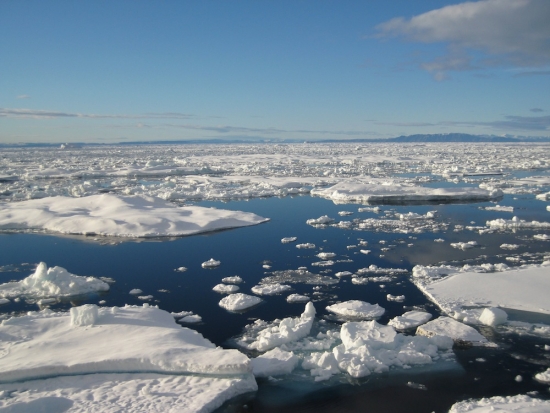 Judah Cohen, lead seasonal weather forecaster at AER, a weather and climate consulting firm, said the possibility that Arctic climate change is leading to more extreme weather patterns has initiated a flurry of new studies. “I can tell you that I am busier now reviewing journal papers than I have ever been in my career and they are all on sea ice” he said in an email. “I think this will be a dominant area of research and discourse for years to come.”

For her part, Francis is continuing to keep a wary eye on the weather map, convinced that the evidence for Arctic-induced weather extremes will continue to mount.

“As we continue to emit ever-increasing amounts of greenhouse gases into the atmosphere and as the Arctic continues to warm faster than mid-latitudes, we will see the case for the linkage strengthen,” Francis said. “I expect that with every year we will see a clearer response of weather patterns in all four seasons, and new modeling experiments will help elucidate the links in the chain, as well.”