NASA’s latest satellite has opened its eyes for the first time and the images it has beamed back to scientists on Earth provide a new view of the globe’s rainfall. They also offer a sneak peek into how the satellite could help provide more detailed imagery and analysis of hurricanes, nor’easters and other strong storms as they form around the planet.

In late February, NASA launched the Global Precipitation Monitoring (GPM) Core Observatory, the lynchpin in a collection of international satellites that will enhance scientists’ view of global precipitation.

The first images released this week showed the intimate details of an extra-tropical cyclone, a storm that forms similar to this week’s nor’easter, churning in the north Pacific Ocean on March 10. The GPM’s sensors are able to identify 13 types of precipitation in liquid and frozen forms. It’s the first satellite designed to detect snow and light rain from space, both of which were seen in the March 10 storm. 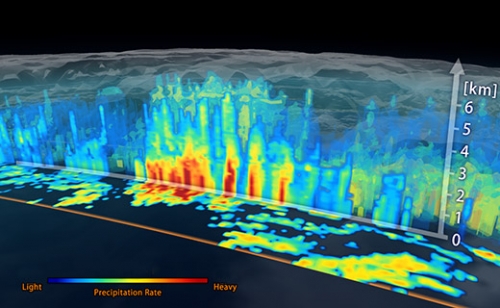 A 3-D look inside an extra-tropical cyclone observed off the coast of Japan on March 10.
Credit: JAXA/NASA

The satellite doesn’t just provide information about the type of precipitation falling to the ground, but also gives scientists a 3-D look. That view helps further refine rainfall measurements.

The new satellite has the potential to be a gold mine of information. GPM is already expected to be a major asset in advance of the North Atlantic hurricane season, which starts June 1. The detailed views of hurricanes it could provide may help scientists improve forecasts, and allow emergency managers to better plan for storms.

In a world where climate change is likely to increase the number of heavy downpours, improving precipitation forecasts will be increasingly important. All regions in the U.S. are already showing an increase in extreme precipitation events, particularly in the Northeast where heavy rain has increased 74 percent from 1958-2011.

You May Also Like
Catch the Breeze: Wind Farms Blast Across U.S.
March Snowstorms 'Uncommon, but not Rare'
2013 Is 6th Warmest Year; Climate Change Contributes
A Cold U.S. Winter for Sure, but 8th Warmest Globally