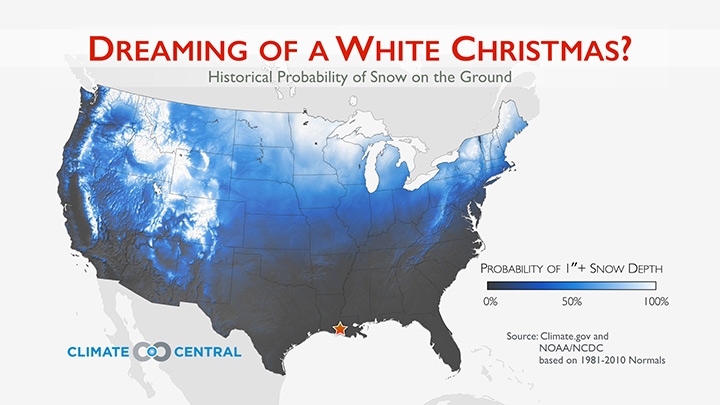 A map showing the odds of a white Christmas in the continental U.S. based on the National Climatic Data Center's climate normals for 1981-2010.

If you want to celebrate a white Christmas in the continental U.S., play the odds and head to Duluth, Minn. On the other hand, Miami is one of your best bets if snow isn't your style according to data from the National Climatic Data Center.

The map above shows which locations across the U.S. historically have the best and worst chances for a white Christmas. NCDC defines a white Christmas as having at least an inch of snow on the ground on Christmas Day. The odds are calculated based on the U.S. climate normals.

A snowstorm this weekend is likely to keep Duluth along with a large portion of the Upper Midwest on track for snow on the ground when presents are opened. While Duluth is the city with the highest probability of having a white Christmas in the Lower 48, other, more remote areas are also just as likely to have snow cover. The lofty heights of the Rockies are one of those areas. With winter snowpack near normal to-date for much of the range, the odds are also extremely good for a white Christmas this year.

Most areas in the Northeast tends to have around a 50/50 chance. This year's Christmas is likely to fall on the brown side for southern half of the region with a warm front this weekend shriveling up the snowpack south of Vermont and no storms are in sight to replenish it.

The only areas that have the potential for a “surprise” white Christmas this year is Kansas and the panhandle of Texas. That part of the Southern Plains generally have an 11-25 percent chance of a white Christmas. Snow is likely to fall there this weekend and temperatures could remain cold enough to preserve it on the ground until Christmas day.

An analysis of all long-term weather stations in the U.S. found that snowfall decreased at 57 percent of them from 1930-2007. Some of it is due to drying, but other research suggests that for most areas in the west and central part of the country, it’s due to more snow falling as rain from 1949-2005. That studied defined winter as the period of November-March.

Meteorological winter, which runs from December-February, is also the fastest-warming season in the contiguous U.S. The country has warmed 0.61°F per decade since 1970 due in part to human-induced climate change.