Stability in the rapidly changing Arctic is a rarity. Yet for years researchers believed the glaciers in the frigid northeast section of Greenland, which connect to the interior of the country’s massive ice sheet, were resilient to the effects of climate change that have affected so much of the Arctic.

But new data published Sunday in Nature Climate Change reveals that over the past decade, the region has started rapidly losing ice due to a rise in air and ocean temperatures caused in part by climate change. The increased melt raises grave concerns that sea level rise could accelerate even faster than projected, threatening even more coastal communities worldwide. 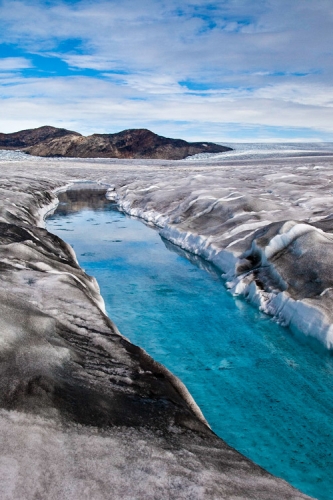 “North Greenland is very cold and dry, and believed to be a very stable area,” said Shfaqat Khan, a senior researcher at the Technical University of Denmark who led the new study. “It is surprisingly to see ice loss in one of the coldest regions on the planet.”

The stability of the region is particularly important because it has much deeper ties to the interior ice sheet than other glaciers on the island. If the entire ice sheet were to melt— which would take thousands of years in most climate change scenarios—sea levels would rise up to 23 feet, catastrophically altering coastlines around the world.

Sea levels have risen 8 inches globally since the start of the 1900s, and current projections show that figure could rise another 3 feet by the end of this century.

Some recent research has suggested that Greenland’s ice loss may slow, but not all researchers agree. Jason Box, a glaciologist at the Geological Survey of Denmark and Greenland, said the new study presented a novel analysis of the region and that other factors such as soot could contribute to even more rapid melt in Greenland and other parts of the Arctic.

“These new measurements show that the sleeping giant is awakening and suggest—given likely continued Arctic warming—that it’s not going back to bed,” Box said in an email.

Greenland houses 680,000 cubic miles of ice in its ice sheet, which stretches up to 3 miles thick in some places and covers roughly three-quarters of the island. Glaciers stretch from this frozen mass in all directions, eventually meeting the sea. In the past 20 years, some of these glaciers, particularly in the southeast and northwest, have dumped ever increasing amounts of ice into the ocean. That water has accounted for more than 15 percent of global sea level rise over that period.

Since the mid-1960s, climate change has helped drive average air temperatures up about 3.6°F across the Arctic, more than double the increase compared to midlatitudes. The rise in air temperatures has fueled a tumultuous decline in sea ice, which has also helped warm the region’s ocean waters. Around parts of Greenland, ocean surface temperatures rose 1.8°-3.6°F between 1990-2011.

While the northwest and southeast section of Greenland have dramatically lost ice, researchers believed the northeast section was holding its ground. From 1978-2003, that was true, but ice loss has accelerated rapidly since mid-2003.

The Zachariae glacier has long acted as a sentinel on the northeast coast of the island, keeping ocean waters at bay from a 370-mile long stream of ice that stretches into the heart of Greenland’s massive ice sheet.

But a series of unusually warm summers around 2003 started to trigger glacial melt. At the same time, a spike in ocean surface temperatures also helped melt sea ice that normally acts as a buttress for the Zachariae and other glaciers in northeast Greenland. Without reinforcement, the glaciers suddenly started to draw down more ice from on high and retreat faster.

That fueled a feedback loop by allowing the anomalously warm ocean water to flow under the glaciers, helping them slide further to the sea. The Zachariae glacier is particularly susceptible to this process because the land under it slopes downward for miles inland, potentially inviting more ocean water to slide under it and further destabilize the glacier. 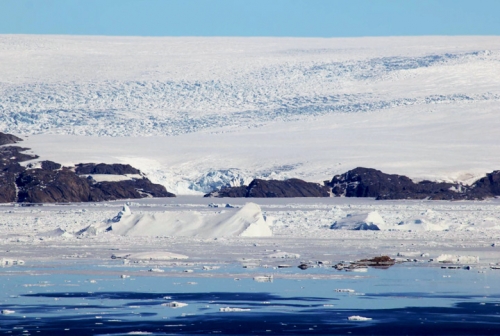 By 2012, the snout of the Zachariae glacier had receded more than 12.4 miles from its 2003 position. In comparison, the Jakobshavn glacier, located in southwest Greenland and long considered one of the fastest-changing glaciers on the island, has retreated 21.7 miles over the past 150 years.

Sea ice concentrations have climbed in recent years, yet the glaciers in the region are still losing mass faster than at any time in the past decade. The most dramatic form of ice loss comes during calving events, when large chunks of ice break off their ends and drift out to sea. Khan said glaciers in this and other parts of Greenland experience calving events 4-6 times a year.

The most famous event in Greenland occurred in August 2010 when an iceberg four times the size of Manhattan ripped away from Petermann glacier on the northwest side of the island. Another major chunk of ice also fell of the same glacier in July 2012.

While calving events garner headlines, Khan said understanding the underlying processes that lead to calving are much more important in determining the fate of glaciers around Greenland, but particularly Zachariae and other glaciers in the northeast.

“We really want to know what is going on beneath the glaciers,” he said. “This is the area where it may become unstable, causing retreat, thinning and huge dynamic ice loss.

“The northeast drainage area is twice that of Jakobshavn. Thus, here we have an area that could be Greenland’s largest contributor to sea level rise in a few years.”