From Japan to Brazil to a place truly out of this world, stormy weather grabbed the headlines this week — well, aside from the LeBron James news — and made for some truly stunning photos. Scroll down for our choices of the most amazing weather shots from the week, including grandeur of Typhoon Neoguri, the beautiful calm after the storm in the U.S. capital, and a storm with a really weird shape.

Neoguri was the top weather story of the week, as it churned across the northwest Pacific toward Japan’s southern Ryuku Islands.

It reached super typhoon status (equivalent to a strong Category 4 or a Category 5 hurricane in the Atlantic) before dry air cut into it and caused it to weaken. The storm brushed the island of Okinawa before curving northward toward the main Japanese islands.

Even as a much weaker storm, it caused considerable damage as torrential rains caused landslides that wiped out structures.

As with Arthur last week, some of the most jaw-dropping images of the storm came from orbit. Astronaut Reid Wiseman snapped a close-up photo of the eye of the typhoon and a jagged “cut” radiating outward from it. And the Suomi NPP satellite took an impressive nighttime shot of the storm as Neoguri made its way toward the island of Kyushu. 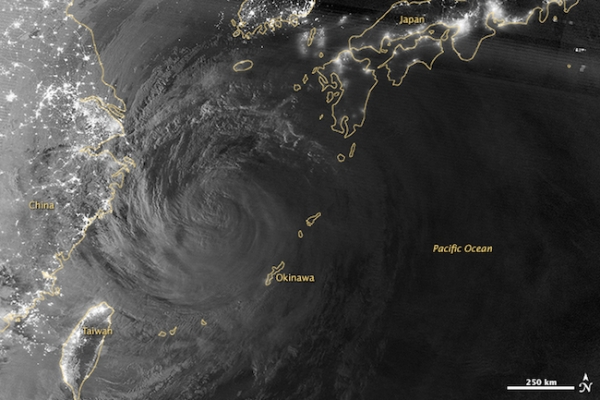 NASA's Suomi NPP satellite took this image of Typhoon Neoguri at night on July 8 after it has brushed Okinawa and as it headed toward Kyushu.
Click image to enlarge. Credit: NASA

Japan wasn’t the only place that faced looming storms this week. CBC reporter David Amber took a snap of dark storm clouds hanging over the beach at Rio de Janeiro’s famed Copacabana beach as fans gathered to watch the Brazil-Germany semifinal match of the World Cup. Perhaps the gathering clouds were an omen of the home team’s upcoming performance?

From @DavidAmber: Thousands on Copacabana Beach in Rio enjoying the calm before the storm. Literally. #BRAvsGER pic.twitter.com/ArmkWOpXdt

Government officials surveying the damage took many moving images of the destruction wrought by the EF2 tornado. The two other tornadoes produced by the storms were rated EF1.

National weather service officially declared last night's storm a tornado — some of the damage left in its path pic.twitter.com/h8eGDSLAwD 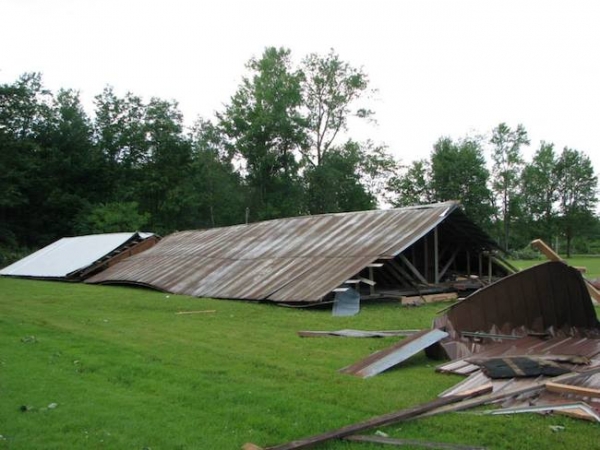 A line of thunderstorms related to the ones that swept across New York moved through Washington, D.C., producing plenty of heavy rain, thunder, and lightning, along with gusts of winds that brought down trees around the area.

As the skies cleared and the sun was able to shine through, it caught the last smattering of raindrops and produced a double rainbow across the nation’s capital.

“The glowing rainbows were unusually vibrant and long-lived, completing a pair of unblemished arcs across the sky.” Jason Samenow wrote at the Capital Weather Gang blog at the Washington Post.

This polar vortex isn’t anything like the one that occasionally brings chilly conditions to Earth’s mid-latitudes. For one thing, it’s a hexagon. How weird is that?!

The hexagon is a jet stream, like the ones that circle around Earth’s polar regions, only it could fit two Earth’s inside it. The six-sided expanse of 200-mph winds encircles a storm at Saturn’s north pole that has been raging for decades and perhaps even centuries, according to NASA experts with the Cassini spacecraft team. The spacecraft has been observing the gas giant since 2004. It has started to get a better look at the polar feature as Saturn nears its summer solstice, which will take place in 2017. A new photo of the storm was released by NASA on July 7.

The hexagon can maintain its shape, scientists think, because Saturn lacks the landforms that create friction and interrupt the jet stream on Earth. 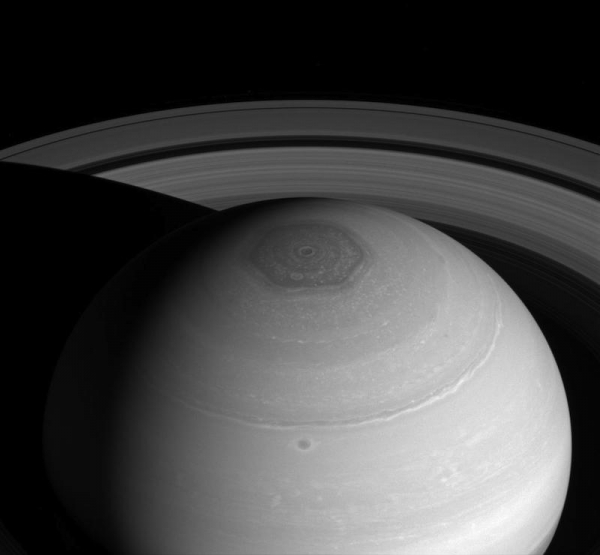