Humans will have to not only stop emitting greenhouse gases by 2085, but also develop technology that will result in negative emissions — the removal of 15 billion tons of carbon dioxide from the atmosphere each year by the end of the century —  in order to prevent global warming from exceeding 2°C (3.6°F), according to a new study.

Human greenhouse gas emissions, including methane and carbon dioxide, have already warmed the globe more than 1°C (1.8°F) compared to pre-industrial levels. The Paris Climate Agreement negotiated last year seeks to cap warming to below 2°C, while at the same time pursuing an even more ambitious goal of limiting warming to 1.5°C. 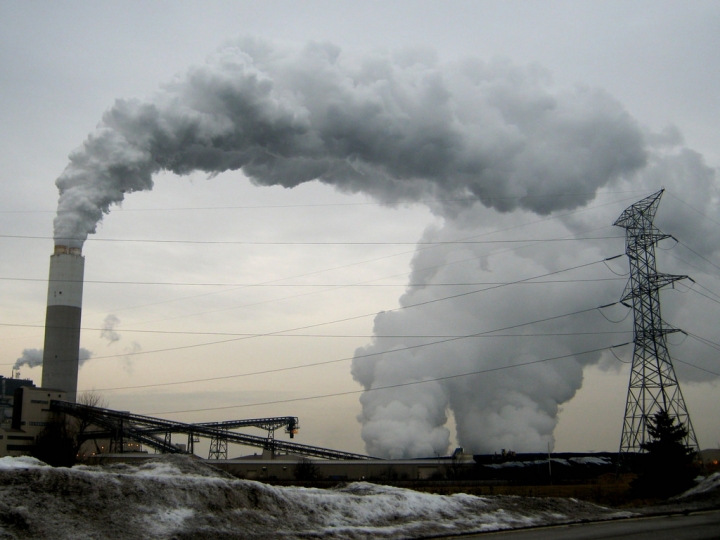 But according to a new National Center for Atmospheric Research study, just cutting emissions under the Paris agreement may not be enough to keep global warming from blasting past 2°C, said Benjamin Sanderson, the study’s lead author.

Meeting the Paris agreement as written will require a long-term commitment to negative emissions in the last two decades of the century, he said.

Countries have agreed to cut total annual global greenhouse gas emissions from about 60 billion metric tons of carbon dioxide-equivalent today to about 54 billion tons in 2030. Without steeper emissions cuts sooner, about 15 billion tons of carbon dioxide will have to be removed from the atmosphere every year by the end of the century in order to keep within 2°C of warming, he said.

Sabine Fuss, a negative emissions researcher at the Mercator Research Institute on Global Commons and Climate Change in Berlin, said the NCAR research confirms that individual countries’ emissions cuts pledges under the Paris agreement are insufficient to meet the pact’s global warming goals.

The study is in line with earlier research supporting negative emissions and its approach gives scientists a better understanding of when emissions cuts and carbon removal are necessary to keep global warming in check, she said.

Negative emissions aren’t a new idea. The Intergovernmental Panel on Climate Change included negative emissions in some of its climate stabilization scenarios in its Fifth Assessment Report in 2014. The IPCC warned that the feasibility of removing carbon from the atmosphere is highly uncertain, however, in part because the technology remains unproven and scientists haven’t assessed any risks carbon removal may pose. 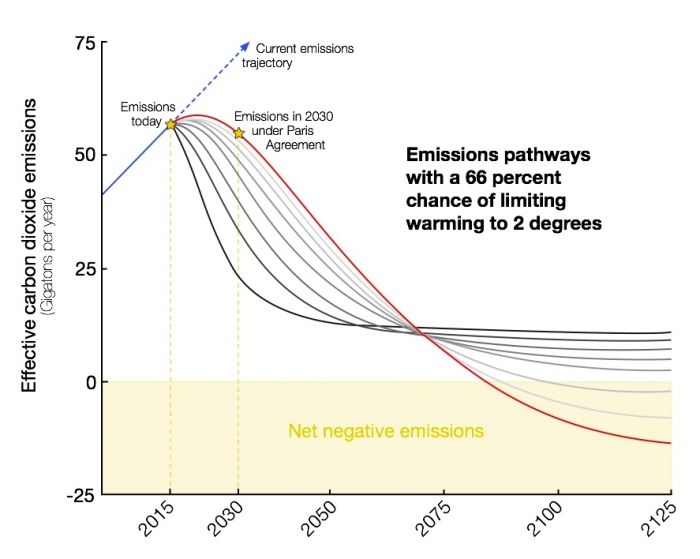 This graph shows the possible global carbon emissions trajectories that would have a two-in-three chance of keeping global warming from exceeding 2°C (3.6°F). The blue line represents the current emissions trajectory. The red line represents the path that society will be on if countries adhere to the Paris Agreement. The gray lines represent other possibilities, all of which require more stringent emissions cuts in the near term but fewer negative emissions later.
Credit: NCAR

Scientists are studying many different ways of atmospheric carbon removal, Sanderson said. Chief among them is a method called “bioenergy, carbon capture and storage,” or BECCS. It works like this: Trees and other plants, which absorb atmospheric carbon, are grown specifically for carbon removal, then they’re burned to generate electricity, and the emissions are captured and sequestered underground.

Other strategies involve planting large forests across the globe, directly capturing carbon dioxide from the atmosphere and altering soil management to increase the amount of carbon it can store.

“None of these have been demonstrated to be plausible on a large scale,” Sanderson said, adding that the billions of tons of carbon dioxide that would need to be removed from the atmosphere could come at “a phenomenal cost.”

Nobody knows for sure how successful or feasible any of those technologies will be in scrubbing the sky of carbon dioxide, but the NCAR study shows that the urgency of climate change may demand that scientists develop solutions by the time today’s children are adults in addition to slashing emissions as much as possible in the meantime.

“Negative emissions will not play a significant role in any emissions reductions which might occur over the next 15 years,” Sanderson said. “They will need to come from transitions to cleaner alternatives in the energy and transportation sectors.”

You May Also Like:
Warming Is Shifting Around Earth’s Clouds
Fishing For Bright Spots in a World of Sick Reefs
Everything You Need to Know About Wildfires in One Map
Climate Impacts From Farming Are Getting Worse